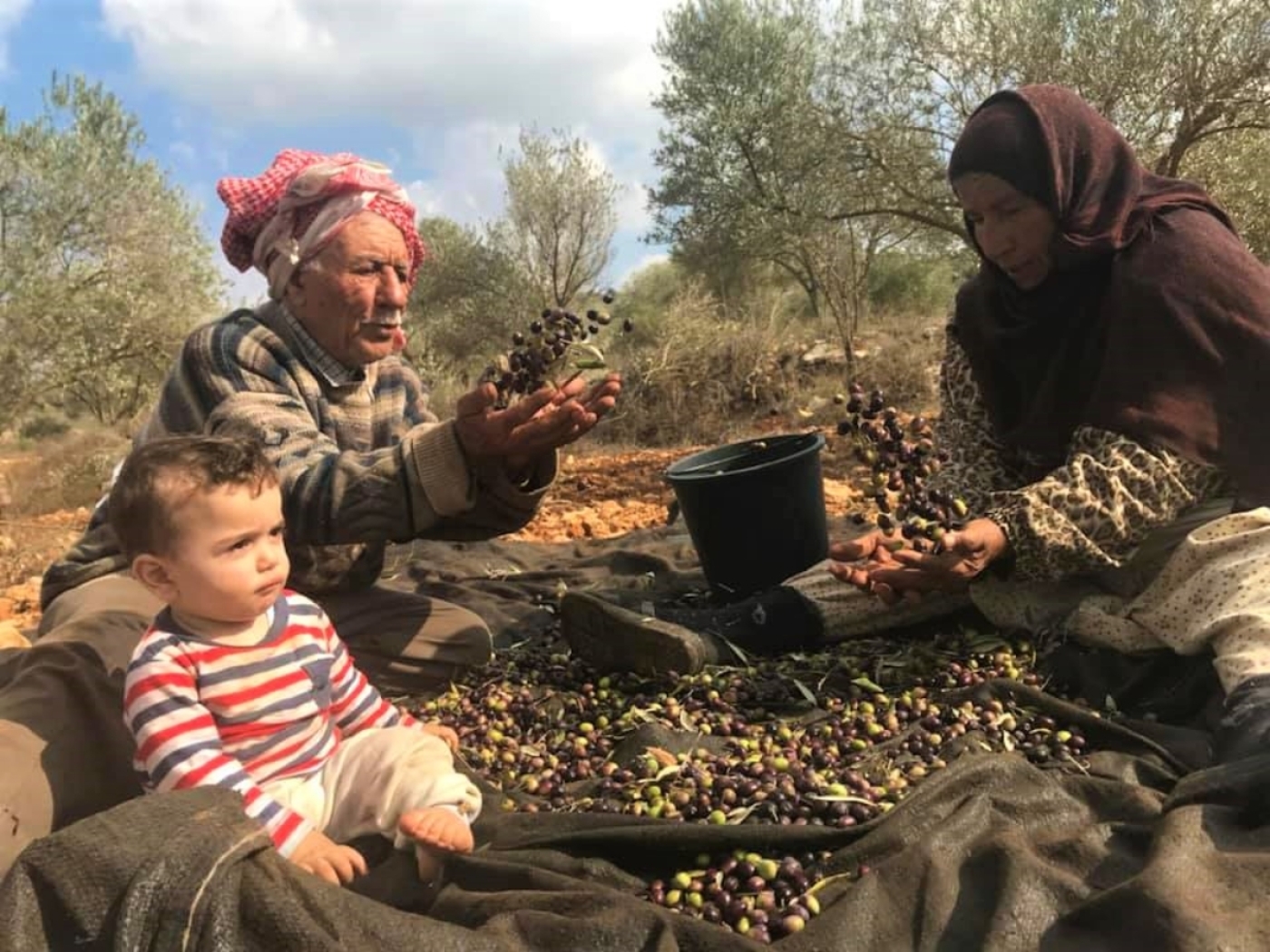 Helweh Abu Ras, pictured with husband and grandson, is unsure she will be able to harvest her olives this year in the village of al-Sawiya (MEE/Arafat Abu Ras)
By
Fareed Taamallah
in
al-Sawiya, occupied West Bank

Helweh Abu Ras looks sadly at the hills across from her home. The nearby slopes are home to her olive trees - but with the illegal Israeli settlement of Eli nearby, her lands may as well be light years away.

"I can't reach my land and this is an injustice. What kind of peace are they talking about? Peace means that I can regain my stolen land," she exclaims. Abu Ras, 77, a Palestinian farmer from the village of al-Sawiya in the northern occupied West Bank, is preparing for the olive harvest season, which starts this week in Palestine. However, she is not sure if Israeli authorities will allow her to access her land.

The olive harvest is a main source of livelihood for thousands of Palestinian families in the occupied territories, but they face many obstacles due to the Israeli occupation - including Israeli restrictions on land access and settler attacks.

For many like Abu Ras, uncertainty remains as to whether they will even be able to reach their trees this year, as the usual hardships have only intensified due to the coronavirus pandemic.

Since the 1993 Oslo Accords, the West Bank has been divided into three zones, known as Area A, B and C. Area C, representing roughly two-thirds of the occupied West Bank, is under full Israeli military control. Meanwhile, Israeli settlements number around 200 in the West Bank, with more than 600,000 settlers living in contravention of international law.

Palestinians living in these areas have seen lands confiscated or their access restricted, while becoming vulnerable to violent attacks by settlers.

The village of al-Sawiya, located in the Nablus governorate, is flanked by two settlements: Eli in the east, and Rehelim in the north.

In 1984, Israeli authorities confiscated more than 1,500 dunams (370 acres) of land belonging to al-Sawiya villagers, 10 dunams (2.5 acres) of which belong to Abu Ras’ family. Since then, these Palestinian landowners have been denied the right to cultivate their property, planted with "the best types of olives, figs and grapes", the elderly woman tells Middle East Eye.

In 1991, Israeli authorities confiscated several hundred more dunams from al-Sawiya in order to establish Rehelim. This affected dozens of Palestinians in the village of around 2,300 residents, including Abu Ras, who was denied access to another 11 dunams of her land due to its proximity to the settlement. In theory, Palestinian landowners are allowed access to their confiscated property in Area C pending Israeli coordination twice a year - in spring during the ploughing season and in autumn during the olive harvest.

"The Israeli army allows us to enter our property twice a year, but the land needs four or five days of work,” Arafat Abu Ras, Helweh’s son, tells MEE. “Usually, we call on Palestinian and international volunteers to help with olive picking, but often a large number of olive trees remain unharvested because the time allowed to us is insufficient."

Family lands near Rehelim were initially completely off limits to the family, Helweh Abu Ras says.

"We filed a complaint to the (Israeli) coordination office, and we submitted documents to prove our ownership of the land to an Israeli court, which ruled that we can access our land only two days a year,” she says. “But even this unjust decision was not implemented.”

In order to access her land, she needs to get approval from the Israeli army, a long and often unsuccessful process. If Palestinian farmers try to reach the land without coordinating with the Israeli army, they expose themselves to severe danger.

"In 2007, I tried to enter my land near the settlement of Rehelim, but the settlers came and beat me up, stole my farming equipment and my donkey and expelled me from my land," Abu Ras recalls.

She submitted a complaint to the Israeli Coordinator of Government Activities in the Territories (COGAT), but the assailants were never held accountable.

Since 2006, Abu Ras has not picked a single fig from her lands, and barely any olives. Her trees have dried up due to neglect and sewage water deliberately channelled from the settlement onto the Palestinian groves.

Meanwhile, many residents in al-Sawiya complain that settlers take advantage of their restricted access to their lands to steal their harvests every year. During the last olive picking season, settlers reportedly looted the trees of three farmers.

While a complaint was filed to Israeli authorities, no one has been held accountable, and the farmers have not been compensated for their loss.

Palestinians living in the West Bank have long complained of frequent attacks by settlers, including assault, vandalism and the destruction of Palestinian farmlands.

While settler anti-Palestinian violence, including so-called “price tag” attacks, is commonplace year-round, it often sees an increase during the olive harvest season.

Doha Asous, 59, is a farmer from the village of Burin, also in the Nablus governorate. Three settlements surround Burin: Yitzhar, a settlement built in 1984 south of the village, notorious for its violent residents; Bracha, built that same year to the north; and the outpost of Givat Ronen, established in the 1990s near Bracha.

Asous owns 11 dunams (2.7 acres) of land planted with 200 olive trees right by Givat Ronen. While she is forbidden from accessing her land for most of the year, she says settlers have stolen her olives and chopped down her trees.

“Last year, the Israeli army gave us a one-day permission to go to our land during the olive harvest. We found that settlers had already stolen the harvest and chopped down trees,” Asous recalls. “We complained to the police and human right groups, but we were never informed about any of the settlers being arrested.”

She says settlers set fire to her olive groves in 2015. The family filed a complaint, but in a disturbingly familiar pattern of impunity, nothing came of it.

The residents of Burin reported that 5,000 trees have been torched by settlers in 2020 alone, without a single assailant being held accountable.

Israeli authorities have forbidden Palestinian farmers from entering their own land if it lies near a settlement following settler attacks.

The restrictions imposed on Palestinians, while the Israeli army often stands back or protects settlers while they carry out attacks, have fostered a sense of impunity.

"We believe that the Israeli army is conspiring with settlers to destroy our trees and steal our harvest,” Abu Ras tells MEE. “Every year, the army delays the issuing of the permits, allowing the settlers to take advantage of this to steal our olive harvest, and then vandalise the trees."

According to Israeli human rights organisation Yesh Din, out of 273 Israeli police investigations into offences committed by Israeli civilians against Palestinians in the West Bank between 2014 and 2019, only 9 percent led to the prosecution of offenders, while the rest were closed without indictment.

While Abu Ras has long seen the impunity of settlers, she has also experienced firsthand how the Israeli army will also escape accountability.

Army ran her over

In 2017, Abu Ras was run over by a military jeep while she was heading to her land, causing her severe injuries. She remained in a coma in the intensive care unit for 10 days. Doctors removed her spleen and she miraculously escaped death.

"We went to the Israeli courts to obtain compensation and to punish the perpetrator, but three years after the incident we still have not obtained any success," she says.

As of 21 September, the United Nations Office for the Coordination of Humanitarian Affairs (OCHA) documented 184 attacks attributed to Israeli settlers targeting Palestinians and their property during 2020.

Palestinians say settlers and the Israeli army have taken advantage of lockdown measures due to the pandemic this year to further push land grabs and vandalism.

In al-Sawiya, settlers in Rehelim sought to seize more land while villagers were under a Palestinian Authority (PA) mandated lockdown. They put up a tent, uprooted trees and installed barbed wire, leading villagers to break the lockdown to protest.

They succeeded in removing the tent and the barbed wire temporarily but, they say, settlers have returned to the area every day under the protection of the army.

Abu Ras and Asous tell MEE that in both al-Sawiya and Burin, the Israeli army did not allow them to plough the land next to the settlements. They do not know whether the Israeli army will allow them to harvest their olives this year, especially in light of the suspension of security coordination between Israel and the PA.

Abu Ras bemoans the loss of her land and trees. The Palestinian says she only counts on God to grant her justice, because the Israeli occupation and its legal system will not.

"I feel sorry for the loss of my land, where I used to grow barley, sesame, wheat and the best kind of figs," she says. “I am 77 years old now and I am not sure I will live long enough to witness the restoration of my land." 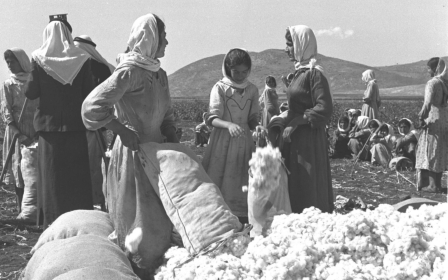 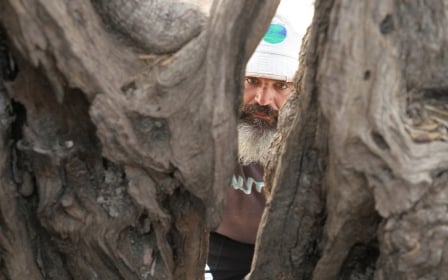