Palestinians in Jerusalem warn of 'Intifada' over US embassy plan 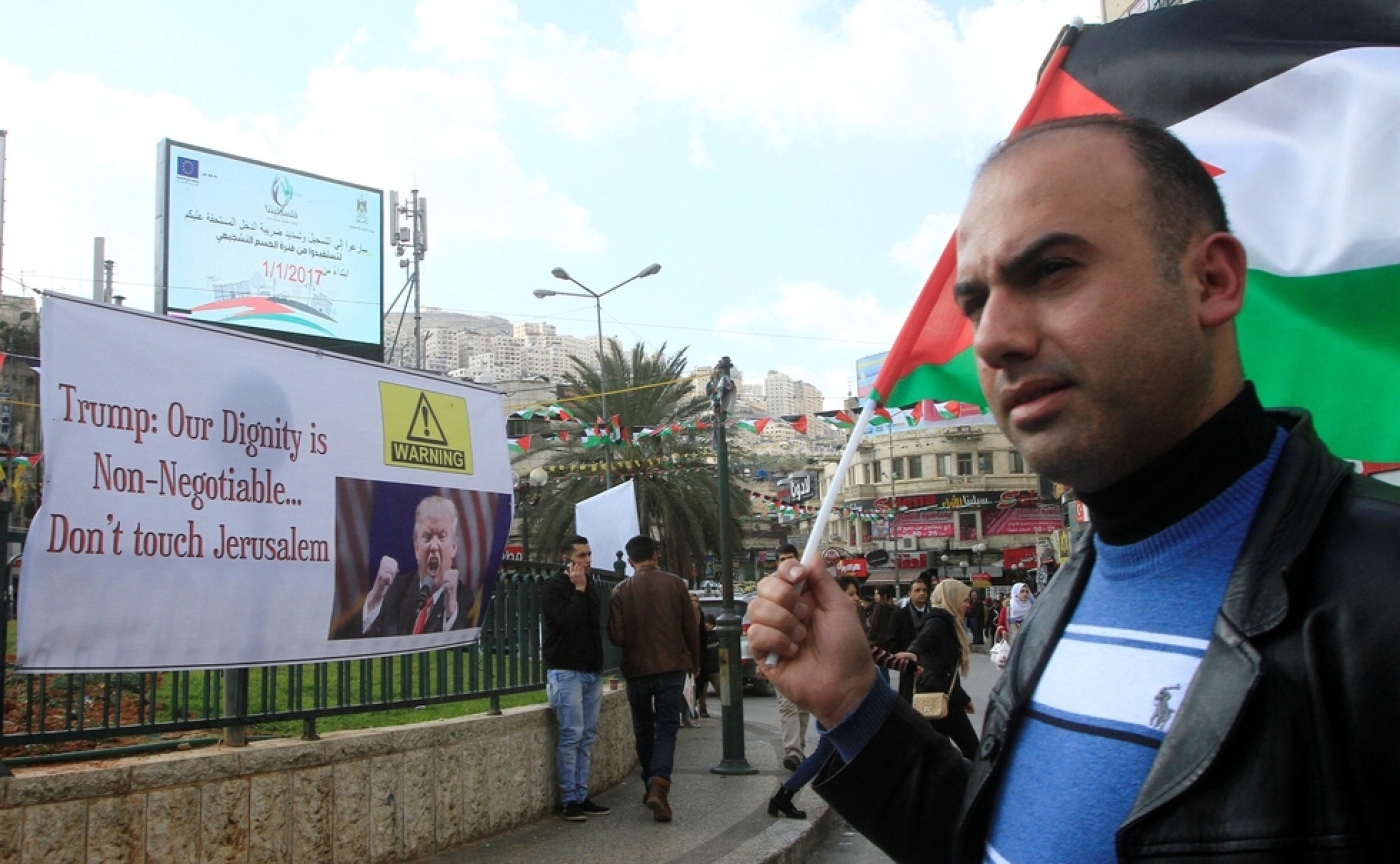 Palestinians living in Jerusalem have warned of the possibility of an "Intifada", or uprising, if Donald Trump moves the US embassy from Tel Aviv to the ancient city.

The new US president has pledged to relocate the US embassy in Israel from Tel Aviv in a move which looks set to change the balance of forces in the region and compromise any future prospect for a Palestinian-Israeli peace deal.

Israel claims Jerusalem as its capital but most of the international community refuses to recognise any part of Jerusalem as Israeli territory and considers East Jerusalem to be part of the illegally occupied Palestinian territories.

The arrival of the US embassy in the city would signal a massive change in attitude in Washington.

Speaking last week, prior to Trump's inauguration, a spokesperson for the incoming president said an announcement regarding the embassy was "coming soon".

The proposed move has sparked widespread concern among Palestinians, with protests taking place last week in the occupied West Bank.

Middle East Eye spoke to influential Palestinians living in the ancient city about what the relocation would mean and their wider concerns about Trump's presidency.

'Continuous pressure will ultimately lead to an explosion'

Sheikh Ikrima Said Sabri, the head of the Supreme Islamic Council, is a former grand mufti of Jerusalem and all of Palestine. An imam at Al-Aqsa Mosque, he is one of Jerusalem’s most senior leaders. “The election of Trump raises serious concern for us. Why? Because he made promises to the Jews and Israel, promises which are hostile and affect our rights as Palestinians, be it the issue of moving the embassy to Jerusalem, or his support for the settlements. He even sent an invitation to the heads of Israeli settlement councils to attend his inauguration ceremony. This clearly means that he supports settlements and he believes that Jerusalem is the capital of Israel. These are all hostile stances against the Palestinian people.

The US has fallen into contradiction, because it sponsored the Oslo agreements which stress that the status of Jerusalem will not be agreed upon until final status negotiations. Moving the embassy to Jerusalem means that the US is recognising Jerusalem as the capital city of Israel, leaving no room for negotiation as to the status of Jerusalem. This violates our rights in the city and prevents us from implementing our own political policies.

The transfer of the embassy will give rise to another eruption in the region: continuous pressure will ultimately lead to an explosion. We cannot accurately predict what the world will see on the Palestinian streets, but the world must know that anger and rejection is brimming on the subject of the transfer of the embassy, as this means that our rights, both as Muslims and Christians, have been robbed from us in Jerusalem.

What is disturbing is the colonial plans and hostility towards our people. What has happened in the Muslim and Arab world has reflected negatively on us and we have been left on our own. The attention has moved away from Jerusalem. We are bereaved. We do not consider the coming days as encouraging, but perceive them with tension and distress."

Um Kamel al-Kurd was evicted by Israeli authorities from her home in the Sheikh Jarrah neighbourhood in East Jerusalem in 2009. She has become a symbol of the Palestinian struggle in Palestine. “I have absolutely no objection to Donald Trump as president, but I am opposed to his policies, and specifically the transfer of the US embassy to Jerusalem. This will be the biggest catastrophe for our rights as Palestinians and as an Arab nation as we consider Jerusalem as an eternal capital for the Palestinians.

The transfer of the embassy will cause a huge clash and outbreak, not only in Palestine, but also across the world. It will certainly create a negative impression of the US. Moving the embassy is terrorism on a mass scale against the Palestinian people, and if the transfer goes ahead, a third Intifada will erupt, which will extend into the Arab and Muslim world.

The world must stop the madness of Israel and the US and they must know that Jerusalem is a red line, which we will not allow anyone to cross. Trump may benefit economically, but politically he will lead the region into war.

House demolitions, settlements, preventing licence issuance, arrests, acts of violence against us. Jerusalem will not be able to cope with a millionth of what is going to happen in the coming period. Jerusalem just needs a spark and it will ignite. No one really knows what is happening in Jerusalem because there is an ongoing media blackout, but we will certainly not put up with any further repressive steps against us."

'The Palestinian street is tense and brimming with anger'

Jamal Juma, who lives in Jabel Mukaber in south-east Jerusalem, is the head of the ‘Stop the Wall’ campaign, which campaigns against the wall and settlements. Jamal has been arrested several times for his activism. “I consider Trump’s election to be the result of a continuous policy of successive American governments in their incitement, racism towards and occupation of various countries under the banner of so-called terrorism. Therefore, I consider Trump’s election a result of all the media incitement against the “other” people. Trump is known for being irrational and racist, and this is probably the issue we fear most as Palestinians. Trump is an embodiment of the white colonial occupier, and he reminds us of the colonialism and racism in Africa and the Middle East.

We Palestinians are apprehensive, perhaps more fearful than others, since he began his foreign policy on Palestine, particularly the issue of transferring the US embassy from Tel Aviv to Jerusalem, and its imminent repercussions. The movement will be a blow to international law, and the global recognition that Palestine is occupied and that Jerusalem has been an occupied city since 1967. The danger of the embassy transfer is that it legitimises the settlements and occupation, and this is a very dangerous precedent for a country as powerful as the US to set.

Extreme tension has reigned over the streets of Jerusalem for many years as the city is being targeted by the occupying entity now more than ever. What is happening in Jerusalem on a daily basis is an ongoing war crime against the Palestinian people. If there was anything real like international law, then Israel should have been tried in the international courts many years ago.

Jerusalem is considered one of the most important cities in the world for its historical and cultural landmarks. Yet these landmarks are being obliterated and a system of Judaisation is under way by the Israeli occupation. The incoming Trump administration is adding severely to this wound by proposing the transferral of the US embassy to Jerusalem, which in effect, is affirming the policy of Israel.

What is happening in Jerusalem on a daily basis is an ongoing war crime against the Palestinian people
Jamal Juma, Activist

The Palestinian street in Jerusalem is tense and brimming with anger. Therefore any move towards transferring the embassy will ignite Jerusalem and the region. The move will also be a blow to the peace process and a permanent end to the Oslo agreements, and there will not be any justification for the existence of the Palestinian Authority.

Trump, with this step, will end all international efforts for the recognition of a Palestinian state with its capital in Jerusalem.

Israel and US policies are provoking a third Intifada because they are not giving Palestinians any option but to rise up. This is especially so following the recent Paris conference, which the Palestinians had high hopes for, but which was quite frustrating and served only the interests of the Israeli occupation.

The Palestinian street is verging on a third Intifada now more than ever. We cannot be optimistic about the new US administration. This year will be catastrophic should the US follow its promises to Israel."

Archbishop Sebastia Theodosios (Atallah Hanna), the Greek Orthodox Patriarchate of Jerusalem, is the only Orthodox Palestinian Archbishop and is renowned for his high profile political activism and denunciation of the occupation. 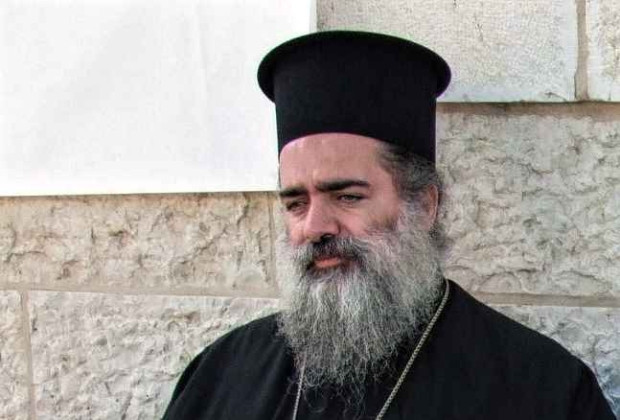 Trump's position is hostile and this is a provocation to the Palestinian people. US politics has always been biased in favour of Israel. Jerusalem is not a subject for bargaining for any US president to present to Israel on a plate of gold.  Jerusalem is an Arab city that is occupied. Jerusalem is the capital of Palestine and it’s not for Trump or anyone else to impose anything on Jerusalem that is not acceptable to Palestinians.

READ: 'Israelisation' of Jerusalem is a project gone wrong

Trump’s personality is very dangerous, and it may befall upon us much destruction. If Trump carries out his promise to Israel in moving the embassy, then it will be an unprecedented encroachment on the city of Jerusalem and it’s political significance, and this will be unacceptable for the Palestinian people. All Palestinians will protest and express their rejection of this decision.

I seriously doubt that Trump will take such a step; but I think this would probably be the most appropriate time for the US State Department to move its embassy to Jerusalem to practise its oppressive policies amid the current state of the Arab world, and we must take this matter seriously. 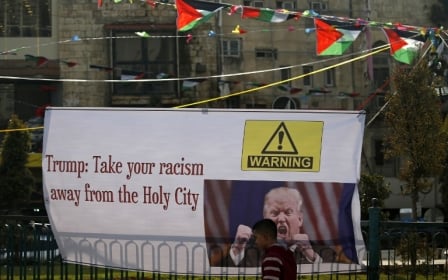