Peace or Palestinian surrender? An interview with Norman Finkelstein

The ostracised American scholar discusses US-Iran negotiations, Hezbollah's intervention in Syria and the evolution of the BDS movement 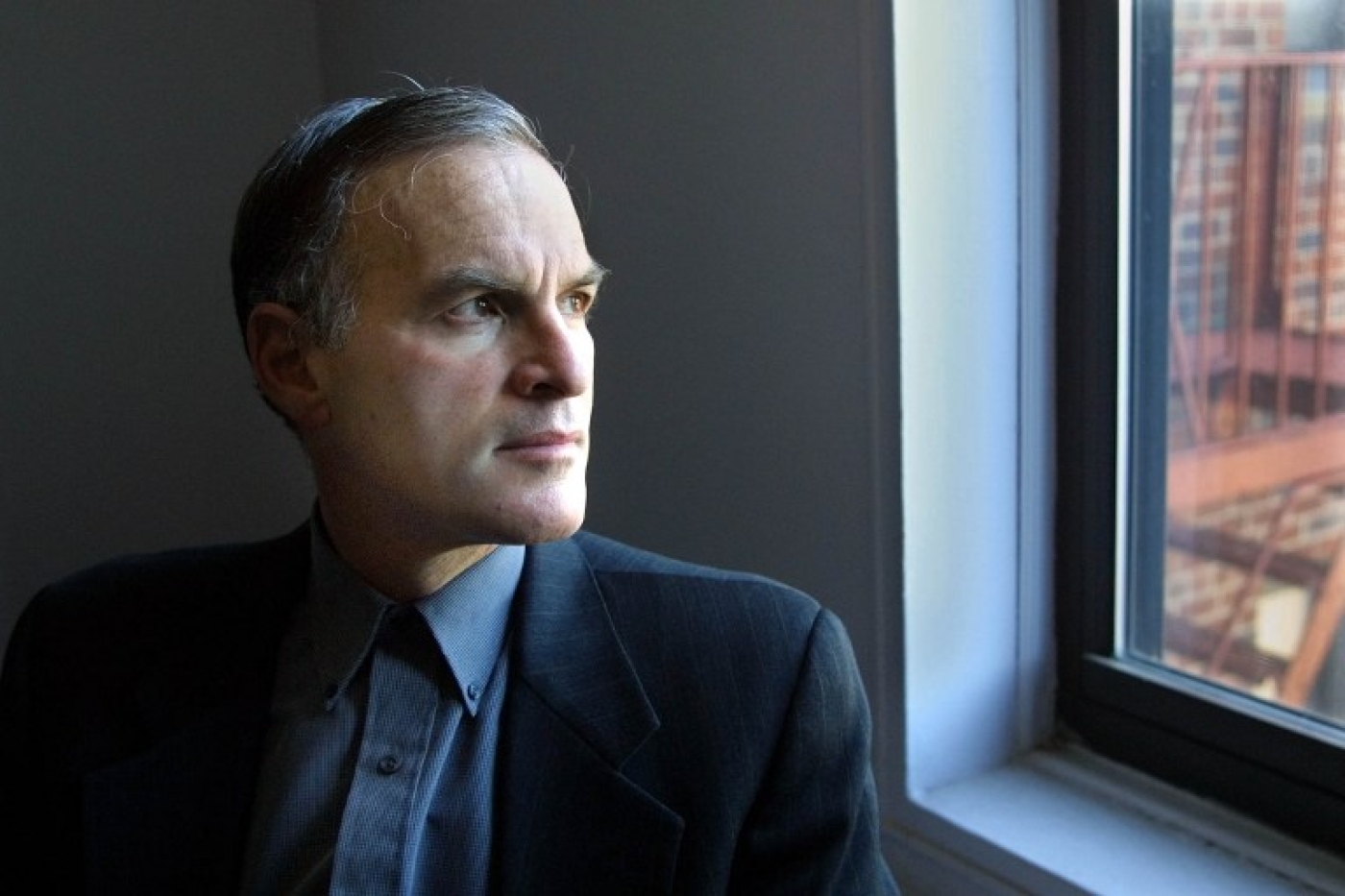 Norman Finkelstein, in his apartment in Brooklyn in 2008 (AFP)
By
Tom Finn

Aside from the renowned linguist and philosopher Noam Chomsky, Norman Finkelstein is perhaps the best known, and most provocative, American Jewish critic of Israel. The son of holocaust survivors, Finkelstein was banned from entering Israel after a visit to Lebanon in which he expressed solidarity with Hezbollah; and frozen out of US universities after a fierce academic conflict with civil liberties lawyer and Israel supporter Alan Dershowitz.

More recently he has angered some “pro-Palestinians” by his adherence to a two-state solution, and criticism of some elements in the Boycott Diversity and Sanctions (BDS) campaign for equivocating over the continued existence of Israel.

A political firebrand, Finkelstein has advocated for the Palestinian cause, presenting himself as a beacon of moral truth in the murk of the Israeli-Palestinian conflict. His work, accusing Jewish charities of exploiting the Holocaust for monetary gain and attacking Israel for oppressing the Palestinians, has made him many enemies. Leon Wieseltier, the literary editor of the New Republic, described Finkelstein as “poison: a disgusting self-hating Jew.”

In a 2009 documentary about his life, Finkelstein said that he inherited from his mother, Maryla, the conviction that Jews have a special obligation to ease the suffering of humanity because of what has been done to them.

In his latest book, Method and Madness, a close examination of the destruction visited on Gaza by Israel since 2008, Finkelstein argues that Israel’s assaults on Gaza should be understood not as retaliation against Hamas violence but as an attempt to “re-establish regional deterrence” after, what he sees, as Israel’s defeat in the 2006 Lebanon war.

While insisting that Palestinians have the legal and moral right to combat the occupation by force, he calls for mass non-violent resistance as the best means of defeating it.

TF: Where are you living now? What are you working on?

NF: I live in New York but I shuttle back and forth to Turkey where I teach international law at Sakarya University. At the moment I’m trying to do more reading and less writing.

TF: Benjamin Netanyahu gave a provocative speech yesterday to US congress calling on America to abandon nuclear negotiations with Iran. Did you watch it?

TF: Are American Jews, particularly democrats, distancing themselves from Israel?

TF: Why did Netanyahu decide to take on such a confrontation with Obama? Has doing so exposed the Israel lobby’s divisive role in US politics?

NF: There is an authentic element of megalomania in this guy. He just doesn’t see or doesn’t care about the way he carries on. He recently called himself the representative of the Jewish people as if he’s King of the Jews. Even Diane Feinstein, a senator who’s a fanatic supporter of Israel said the other day ‘this guy is so arrogant’. Who is he to say he represents the Jewish people? Jewish people have different opinions.

TF: You have expressed solidarity with the Lebanese militant group, Hezbollah. Have your views on Hezbollah changed since they intervened in the Syrian civil war? Now that they’re supporting Syrian President Assad?

NF: I don’t agree with a lot of what Hasan Nasrallah (Hezbollah’s leader) has said and done regarding Syria. Having said that I still regard him as being among the shrewdest political thinkers in the world today. He is careful, very thoughtful, very smart, disciplined, it’s hard not to respect that. But his stock plummeted after Syria. He aligned himself with a regime and a leader which are quite simply unacceptable.

TF: What do you mean by unacceptable?

NF: It’s morally unacceptable. If he (Nasrallah) had said we’ll support the Syrian regime up until the jihadis are defeated and all foreign interference is removed I would have accepted that. Assad’s only legitimacy comes from the fact that he’s his father’s son. That’s not legitimacy in the modern world. Nasrallah knows this himself because Hezbollah has to compete in elections.

TF: Has there been any progress with the peace process since the 2014 Gaza war?

TF: If there’s no peace process how can Mahmoud Abbas and the Palestinian Authority (PA) sustain itself as a political movement?

NF: Because it suits American and Israeli interests. There’s no real desire, no urgent desire, to resolve the conflict. Mahmoud Abbas is an imbecile; he always was. During his intellectual peak he wrote a dissertation saying the Nazi holocaust didn’t happen. They (the PA) all get to be VIPS. They all get to be quoted in the New York Times. What incentive do they have to end the occupation? They’re doing just fine.

TF: In 2012 you called the Boycott, Divestment and Sanctions movement (BDS) a campaign which has successfully pushed some American universities to divest from Israeli companies that violate international law “a cult.” Have your views changed since then?

NF: There’s been an interesting evolution in the BDS movement. If you look at recent resolutions passed at Stanford University and elsewhere, they all trying to distant themselves from BDS. The Stanford resolution said we support Israel’s right to self-determination. It’s ironic because now the whole BDS movement is doing what I said. I told them there’s no possibility you can win a broad audience if you claim you have no position on Israel.

TF: So you’re more supportive of BDS now, after that evolution, you think it’s more inclusive?

NF: BDS have had many important victories. They’ve shown what a phalanx of committed people can do. They’re tireless, resourceful, and well organised. They’ve had a real impact. But it’s been at the expense of their own platform. Every BDS victory has been at the cost of the platform.

TF: How does the US view Iran today?

NF: As an important regional partner

TF: Does that indicate a shift in US policy?

NF: The US always had regional partners, remember, up until 1979 Iran was the regional partner. Even a superpower can’t carry on on its own. There are important common mutual interests now between the US and Iran. There are other pressures, Germany, Russia, they want a deal with Iran, they want oil. It’s not just Obama deciding.

NF: I’ve been to Iran. I was there in April. Everybody there is hurting from the sanctions so there’s a mutual interest in resolving it and I don’t think Israel will have any say whatsoever. This is a serious US interest.

TF: You’re banned from Israel-Palestine. Do you expect you’ll ever be able to return to Palestine?

NF: Probably not no. I think the ban is eternal and I don’t think the conflict is going to be resolved.

TF: In your lifetime?

TF: What do you mean?

NF: Palestine’s a very small place. If you have a lot of money, it’s a very easy way to neutralise any potential opposition. You neutralise them by creating NGOs and you suck up all the talent. They all go and live in Ramallah. I read the other day there are 10,000 NGOs in Palestine. Each one is made of three people, they have an office and a computer. Before you know it these people are earning 5, 10 times what a typical Palestinian earns, they get to travel and have a, relatively speaking, nice life.

TF: So you’re saying you think ordinary Palestinians have given up?

NF: I think they’re functioning at the level that is perfectly understandable of each looking out for themselves. I don’t fault them. There’s a lot of cynicism there about politics, they have an unusually corrupt leadership.

TF: Why does that matter?

NF: However cyclical you are about politics, for any struggle to succeed the leadership has to have some degree, some residue, of idealism and commitment to the cause. The Palestinian leadership is nothing.

TF: Aren’t there other factors that could cause resentment?

NF: The unending Israeli oppression, harassment, humiliation, it reaches a tipping point where Palestinians finally explode. Like the American poet Langston Hughs asked: ‘What happens to a raisin in the sun?’ It explodes. There can be an explosion but unless there’s a leadership to canonise or organise this explosion in a politically productive direction it’s just going to fizzle out. There’s got to be a leadership.

TF: What about Hamas ?