Photos posted online by militants purport to show the mass execution of 1,700 Shia soldiers by the Islamic State of Iraq and the Levant 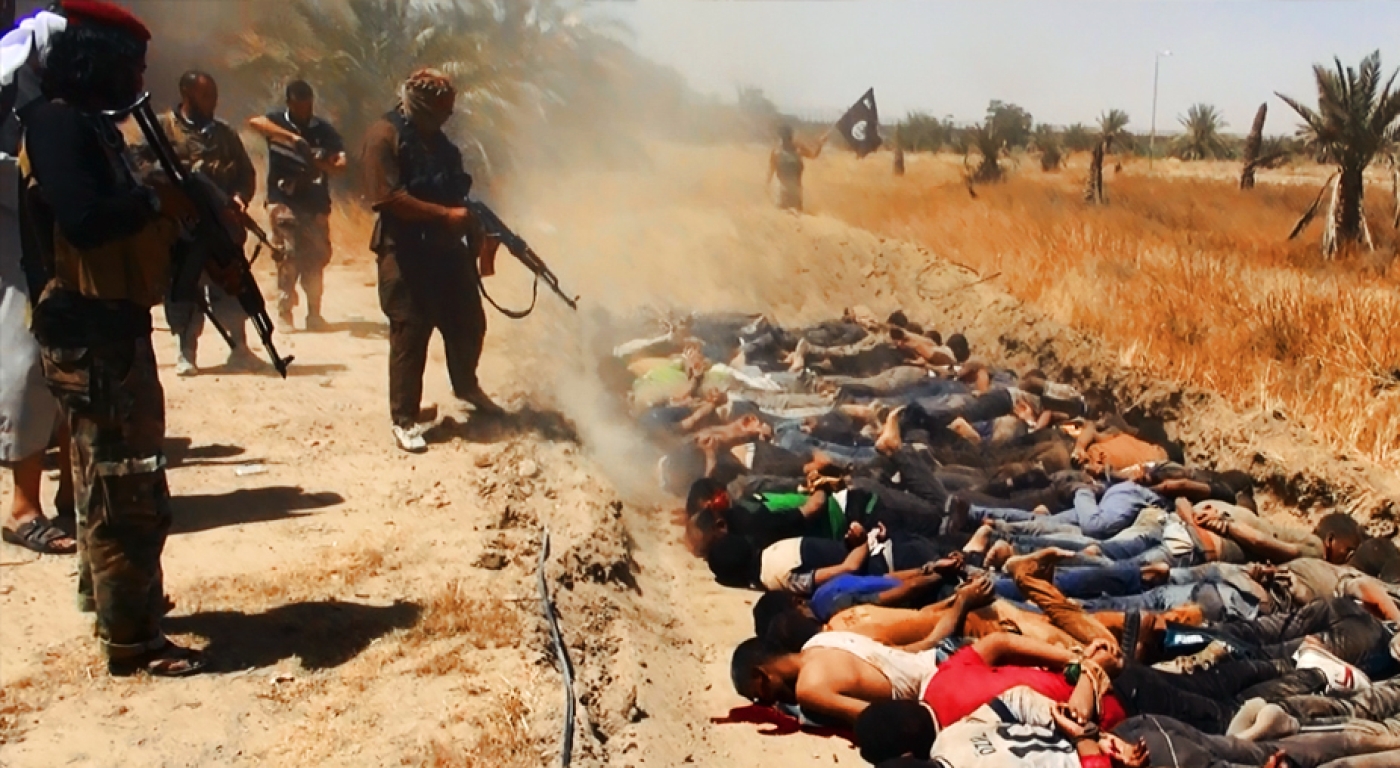 The United States on Sunday condemned as “horrifying” a claimed massacre by the Islamic State of Iraq and the Levant (ISIL) in the northern city of Tikrit, where the group allegedly killed hundreds of Iraqi soldiers.

“The claim by the Islamic State of Iraq and the Levant that it has massacred 1,700 Iraqi Shia air force recruits in Tikrit is horrifying and a true depiction of the bloodlust that these terrorists represent,” US State Department spokesperson Jen Psaki said in a statement.

“While we cannot confirm these reports, one of the primary goals of ISIL is to set fear into the hearts of all Iraqis and drive sectarian division among its people,” she added.

Photos posted online on 14 June, shared on social media by ISIL, show armed men pointing guns at dozens of men lying face down in a ditch. The men are wearing civilian clothes, are shoulder to shoulder with the hands bound, and form part of a mass execution that ISIL say left 1,700 Shia soldiers dead.

Their authenticity has been confirmed by Iraq’s top military spokesperson, Lt. Gen. Qassim al-Moussawi, and were originally posted by ISIL to the Welayat Salahuddin website. The alleged mass execution is said to have taken place in Salahuddin province, which was taken control of by armed groups last week.

The photos were first shared on social media by the group's Twitter account, now suspended, where they made the claim of having murdered 1,700 soldiers.

Militants including ISIL control large swathes of Iraq, after having taken over the country’s second largest city Mosul on 10 June before moving on to seize Tikrit, the capital of Salahuddin province and the hometown of former leader Saddam Hussein. It comes several months after al-Qaeda linked militants won control of the western city of Fallujah, prompting a fierce government siege that is yet to yield victory.

The deepening crisis has prompted the evacuation of international embassies, with the US saying on Sunday it will withdraw some of it staff and boost security at its consulate in the capital Baghdad. State Department spokesperson Psaki said the decision had been made due to “ongoing instability”, something that was shortly followed by Australia announcing the evacuation of most of their embassy staff.

Iraqi officers have said they are beginning to drive back the militants, saying soldiers had recaptured two towns north of Baghdad. As troops began to regain ground they are said to have found the burned bodies of 12 policemen in the town of Ishaqi in Salahuddin province, according to a police colonel and doctor who spoke to the AFP.

Iraqi Prime Minister Nuri al-Maliki’s security spokesperson, Lieutenant General Qassem Atta, said on Sunday that government forces had “regained the initiative” and “killed 279 terrorists” in the past 24 hours, although these claims have not been independently verified.

While fighting has not reached Baghdad yet, the capital has not been spared from the recent violence, with a bomb killing nine people and an attack on a Shia recruitment centre for volunteer fighters leaving six dead on Sunday. Top Shia cleric Grand Ayatollah Ali al-Sistani had earlier called his followers to take up arms, urging people to fight and protect the country against the advancing militants.

Analysts have blamed the crisis, at least in part, on rising sectarian tensions among the country’s sharply divided Sunni and Shia communities.

“A large proportion of the Sunni people feel they are not getting a fair deal,” said Hayder al-Khoei, associate fellow at international affair think-tank Chatham House. “It is worth bearing in mind too that there is rising anger on both sides, with the Shia feeling threatened by the jihadists who they view as targeting them.”

“For not it hasn’t spilled into an open sectarian conflict but these developments are going to make that far more likely,” he added.

As for ISIL, a group regularly accused of carrying out brutal acts of violence, some analysts say they are gaining increasing currency among a disaffected Sunni community.

“Not all Sunnis in Iraq support ISIL but a sizeable segment do,” said Fawaz Gerges, professor of international relations at the LSE. “The reason why ISIL has been able to well in Iraq is because on top of the battle with Maliki there is the sectarian fight between the Sunni and Shia communities.”

“ISIL has been able to capitalise, to manipulate these cleavages and recruit many Sunni fighters,” he added.

There are no accurate figures for the number of ISIL fighters in Iraq, although Gerges says the total is likely to be in the low thousands. Their numbers have been boosted in the recent fighting, after the group took Mosul they released almost two thousand prisoners from the central jail, many of whom are expected to have joined their ranks.

There has been shock and anger expressed on social media to the alleged mass execution, with reports the ISIL account that originally shared the photos has now been blocked.

The execution of unarmed soldiers by #ISIS is a war crime. Their leaders aren't just #Iraq's enemies, but humanity's.

Regardless of what heinous act #ISIS photos prove to depict, clear they've once again outdone themselves in ruthlessness and... #Iraq 1/2 Iraq Vote
Sunnis seek a say ahead of Iraq vote