Mark Rowley, the assistant commissioner for London's Metropolitan Police, was due to appear on a panel to launch the society's new report, "Islamist Terrorism: Analysis of Offences and Attacks in the UK", but did not attend the event.

Instead, a statement by Rowley was read out by Michael Howard, a former leader of the Conservative Party, in which Rowley said he welcomed the report as a "factual, impartial and highly useful resource".

Meanwhile, David Anderson, the former independent reviewer of counter-terrorism legislation who contributed a foreword to the report, also told Middle East Eye that he had declined an invitation to the event.

Rowley had faced criticism for endorsing the HJS, which is accused of promoting anti-Muslim sentiment and of links to neo-conservative organisations in the United States.

Shazad Amin, a spokesperson for MEND, an advocacy organisation working on behalf of Muslim communties, said that Rowley should be congratulated for withdrawing from the event.

"Mark Rowley ought to be commended for a brave and principled decision not to attend this event with organisations like HJS, who peddle Islamophobia and whose Student Rights subsidiary has carried out 'witch-hunts' against Muslim students, as the NUS [National Union of Students] confirmed," Amin told Middle East Eye.

"There is no place for people like this in our 'tolerant and mutual-respect based society’. In our view, the Met risked losing serious credibility with Muslim communities which could undermine the fight against extremism if they spoke on an HJS platform.

"The Muslim community will be greatly comforted by their decision and the Met should be congratulated on it."

Student Rights is a campus-based campaign group set up by the HJS which is accused of stoking Islamophobia and has been condemned by the NUS.

The Metropolitan Police and the Henry Jackson Society both told MEE that Rowley had been unable to attend because of work commitments.

"Over the past few days, it became apparent that work pressures in his Acting Commissioner role might preclude Mr Rowley’s attendance," said a spokesperson for the HJS.

"We are delighted he has welcomed our Islamist Terrorism report with a public endorsement of it as ‘a factual, impartial and highly useful resource’. Given the widespread acclaim the report has received, we expect it to become a cornerstone of evolving thought about this serious threat to the nation’s security more generally."

A spokesperson for the Metropolitan Police told MEE: "Due to ongoing work commitments, Mr Rowley was unable to attend."

Rowley had faced calls to withdraw from Tuesday's event from the Muslim Council of Britain, the UK's leading Muslim representative body, which said the police risked jeopardising relations with Muslim communities by appearing to endorse an organisation it accused of "demonising" Muslims.

"Our police services quite rightly place a strong emphasis in building strong relationships with the communities they serve," the MCB said.

"Our senior police officers should therefore be wary of endorsing organisations who have consistently served to demonise British Muslim communities.

"However objective and factual the report may be, the accompanying narrative released by the Henry Jackson Society seems to make oblique references to the usual slurs levelled at Muslims: that Muslims do not integrate, are not part and parcel of British society, and are therefore likely to be terrorists.

"This is a picture we do not recognise."

Meanwhile, Anderson, who stepped down from the role of terrorism legislation watchdog at the end of last month, told MEE that he had agreed to write a foreword to the HJS report because it constituted "a neutral, factual account, not replicated elsewhere, that has the potential to guide policy making in this difficult area".

But he said: "I do not associate myself with all the activities and statements of the Henry Jackson Society. Indeed I declined their invitation to the launch in case there should be any misunderstanding about this."

Anderson also cited a 2015 report into terrorism legislation in which he had cited concerns raised by the MCB about the operation of Prevent in schools.

"Doing that did not denote agreement with every policy or statement of the MCB. But if one could only endorse the work of NGOs with whose every position one agreed, much useful work would have to be neglected," he said.

Hannah Stuart, the author of the report, wrote in the Acknowledgements section that she was "honoured" that Anderson had agreed to provide the foreword.

The Henry Jackson Society was founded in 2005 and in its founding principles calls for the promotion of liberal democracy, capitalism and human rights across the globe, particularly in the wake of what it saw as the failure to effectively intervene in the collapse of the former Yugoslavia.

But Muslim organisations and activists have criticised what they see as an authoritarian streak in the think tank focusing in particular on British Muslim communities.

Hilary Aked, a freelance researcher and co-author of a report on the organisation for the Cordoba Foundation, said the Henry Jackson Society had an "inglorious history of propagating questionable research and targeting Muslims with spurious 'extremism' smears."

Douglas Murray, the associate director of the organisation, has caused controversy in the past for saying that life "must be made harder across the board" for Muslims in Europe following the 2005 London bombings.

In a 2010 debate for Intelligence Squared, he argued against the motion "Islam is a religion of peace".

The Henry Jackson Society has, in turn, criticised the MCB in the past, accusing it of being "not fit for purpose" to tackle what it sees as a problem of growing radicalisation among UK Muslims. 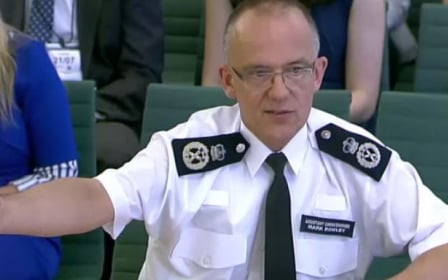