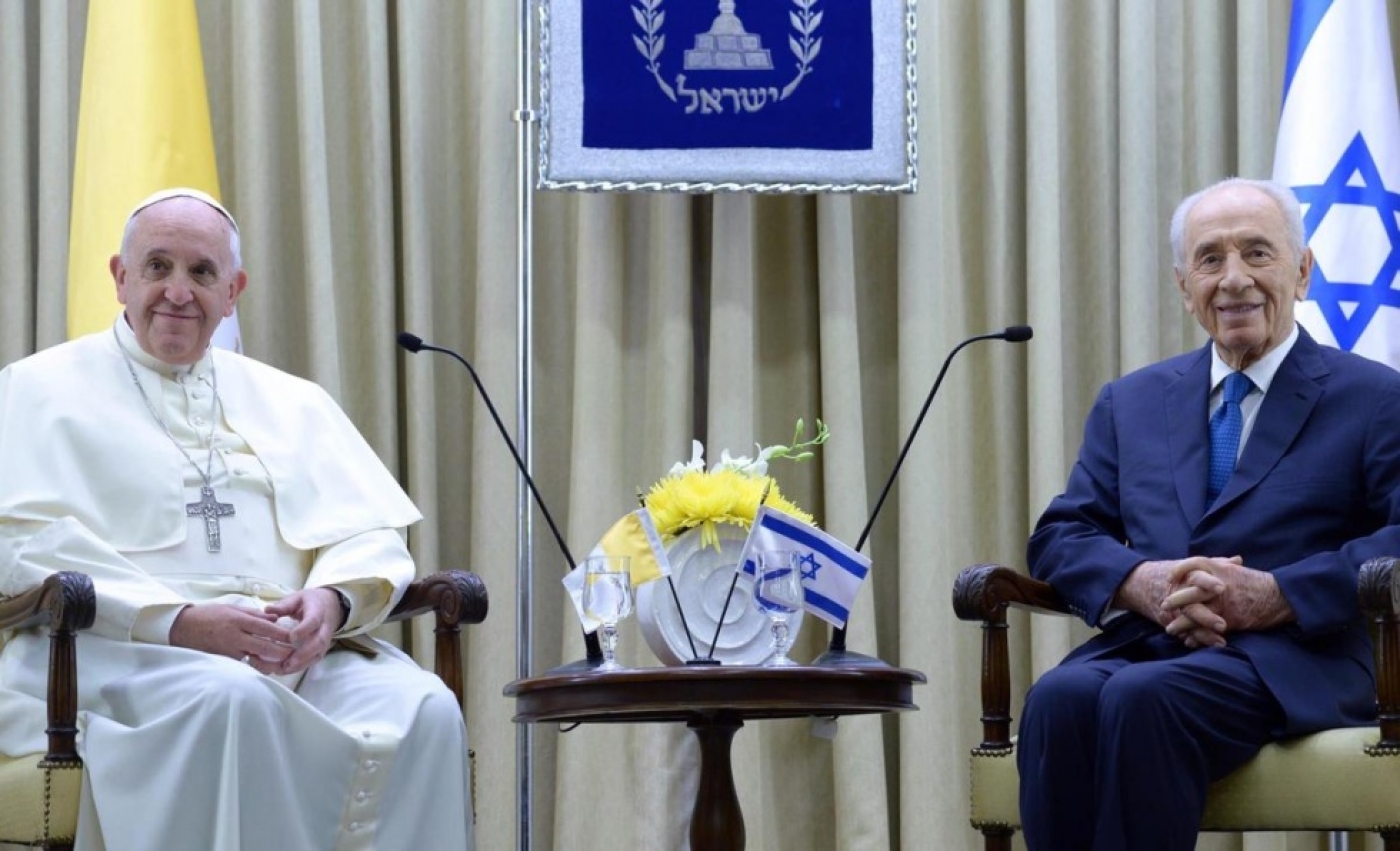 The Pope finished his tour of the Holy Land on Monday with a mass in the Upper Room or Cenacle, on Mount Zion.

The Upper Room is located in a two-storey building also considered holy to Muslims and Jews, who regard it as the place where the biblical figure David was buried.

Vatican efforts to negotiate greater rights at the Upper Room have sparked opposition from nationalist and Orthodox Jews, who revere part of the building as the tomb of King David, prompting a series of angry protests and several anti-Christian attacks.

Police were called to the Church of the Dormition, about 30 metres from the Upper Room in the Mount Zion compound, to probe an arson attack carried out shortly after the pope celebrated his mass.

"Someone entered the church and went down to the crypt, took a book that is used by pilgrims to a small room next to the organ, and set some wood crosses on fire," the Benedictine Abbot of the church, Nikodemus Schnabel, told AFP.

Some of the German Benedictine monks from the church were coated in black soot after putting out the fire and there was a strong smell of smoke, said an AFP photographer. A small pile of fire-damaged crosses lay in a smouldering heap and furniture had been damaged.

The Israeli police said it was investigating the fire. "According to initial testimony, a man, not a Jew, entered the Church of the Dormition, grabbed a candle and set fire to a book," said spokesman Micky Rosenfeld.

The pope was seen off in a brief airport ceremony in Tel Aviv by President Shimon Peres and Prime Minister Benjamin Netanyahu.

Pope Francis called for Christians, Jews and Muslims to work together for peace as he toured holy sites in Jerusalem.

On an early-morning tour of key sacred places in the walled Old City, the 77-year-old pontiff first visited Al-Aqsa mosque compound, then prayed at the Western Wall which lies just beneath it.

The pontiff was rounding off a whirlwind trip which saw him issue a unique invitation to the Israeli and Palestinian presidents to pray with him at the Vatican to end their "increasingly unacceptable" conflict, as well as snatching a personal prayer moment at Israel's separation barrier.

Francis had promised the three-day pilgrimage, which began on Saturday in Jordan, would steer clear of political issues.

But he ad-libbed from his scripted speech to condemn anti-Semitism, religious intolerance and those behind conflicts in the Middle East.

"May we work together for justice and peace," Francis said after being shown around the Al-Aqsa compound, which is also considered sacred by Jews because it was the site where their two famed Jerusalem temples once stood.

Entering the exquisite blue-tiled Dome of the Rock with its landmark golden cupola, used as a place of worship for women only, the pope first removed his shoes before walking down to visit the smaller, silver-domed Al-Aqsa mosque.

Francis the moved to the Western Wall, placing his right hand on the ancient stones and bowing his head in prayer for a few minutes before placing a note in the wall, then sharing an emotional embrace with two close Jewish and Muslim friends travelling with him.

Later in the morning, he visited the Yad Vashem Holocaust museum where he spoke with survivors, and became the first pope ever to lay flowers on the grave of Theodore Herzl, the founder of modern Zionism. Speaking at a solemn ceremony at the Hall of Remembrance he spoke of “the boundless tragedy of the Holocaust” describing it as an “unfathomable abyss”.

He also made an impromptu stop at a memorial for Israeli civilians killed in militant attacks, at the personal request of Prime Minister Benjamin Netanyahu, according to Israeli army radio.

The stop came after four people were killed on Saturday, including two Israelis, when a gunman opened fire on the Jewish Museum in Brussels, prompting the pope to say he was “profoundly saddened” as he landed in Israel on Sunday.

In the wake of the latest breakdown in US-led peace talks, Francis called on leaders to show "courage" to achieve peace based on a two-state solution, saying "building peace is difficult, but living without peace is a constant torment."

A senior Palestinian official confirmed Abbas had accepted and would visit the Vatican on June 6, while Peres's spokesman said only that the invitation was welcomed.

In a boost for relations between bickering Christians, Francis on Sunday also joined Orthodox Patriarch Bartholomew I in an historic joint prayer for unity between Rome and Constantinople.

The pair met, embraced and kissed at the Church of the Holy Sepulchre inside the Old City to mark the historic meeting 50 years ago between Pope Paul VI and Patriarch Athenagoras - the first easing of tensions between the churches since the Great Schism of the 11th century.

Francis has said the main reason for his Middle East visit was the meeting with Bartholomew I, and "to pray for peace in that land, which has suffered so much."