Positive reactions to Iran deal, but it may not convince hard-liners 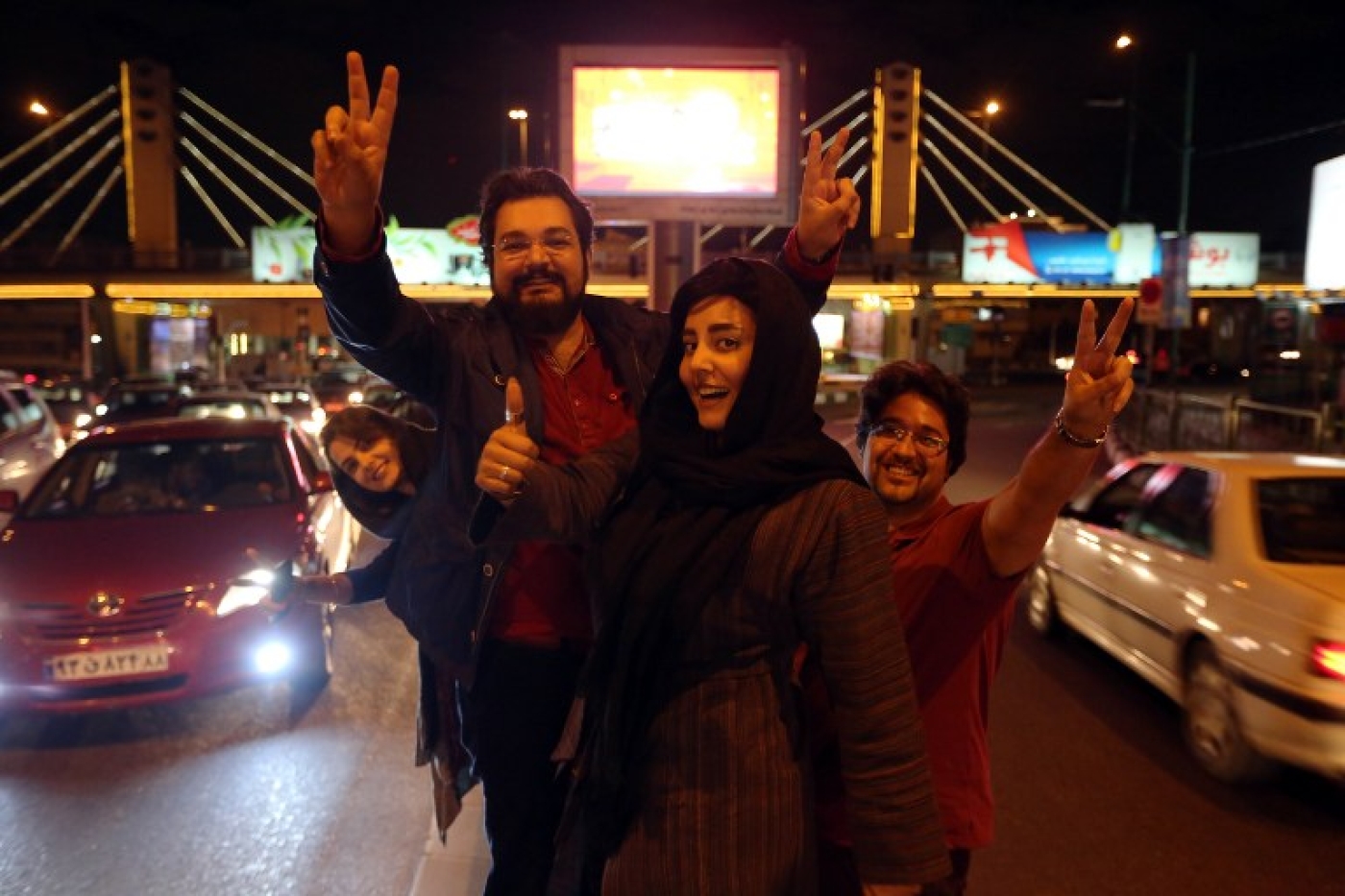 Iranians took to the streets of Tehran last night to celebrate the news (AFP)
By
James Reinl
NEW YORK - Experts responded positively to Thursday’s announcement of a framework deal for addressing Iran’s nuclear programme, but it remained unclear whether the agreement would satisfy hard-liners in Washington and Tehran.
“I’m wildly impressed by it,” Jacqueline Shire, a former member of the UN Panel of Experts on Iran, told Middle East Eye.
“This is Iran saying it is opening the doors and lifting its hood, letting people look inside. But then Iran gets to walk away with dignity intact because they keep an enrichment programme, 6,000 centrifuges is nothing to sneeze at.”
After eight days of marathon talks in Switzerland, Iran and six world powers reached a framework deal designed to allay Western fears that Iran seeks to build an atomic bomb and in return lift economic sanctions on Tehran.
Under the outline deal, Iran would shut down more than two-thirds of its centrifuges producing uranium that could be used to build a bomb, and dismantle a reactor that could produce plutonium and accept intrusive verification by the International Atomic Energy Agency (IAEA).
“Importantly, sanctions relief does not come until Iran addresses enrichment and some other key concerns,” said Shire. “Hugely important is that there’s no plutonium route to the bomb, limited uranium enrichment, and unprecedented IAEA verification and monitoring.”
The framework, fiercely opposed by Israel, Saudi Arabia and some Republicans in US Congress, leaves Iran with just 6,000 out of the 19,000 centrifuges it operates for enrichment and limits Iran's enrichment of uranium for 10 years.
The deal wrapped up eight days of talks, extended after a deadline of midnight on Tuesday, aiming to achieve a political accord that could serve as the basis for a final deal by 30 June. It involved Iran and the permanent members of the UN Security Council – the US, France, Britain, China and Russia – together with Germany, in a diplomatic grouping that has been dubbed the P5+1.
“Hardliners in Congress are going to jump up and down no matter what,” said Shire.
“Serious people who understand the substantive issues are going to have their concerns addressed. My only concern is that sanctions will not be lifted for several months and people will not see the benefit of sanctions relief for some time.”
Paul Sullivan, a nuclear technology expert at Georgetown University, said the current deal dodged important technical issues that meant there was still much to negotiate over before the 30 June deadline.
“They went to Switzerland to make a solid deal and they came back with Swiss cheese,” he told MEE. “This deal is weak and full of loopholes if you look at the very specific wording of where things can be done over what time periods.
“What’s going to happen is there will be some political fallout in Iran, there will be political fallout in this country, people will look at it for their own political benefit. That’s why they’re called hardliners: they’re inflexible.”
The US also failed to tackle important issues, such as Iran’s ability to build missiles and its support for armed Shia Muslim groups that seek to advance Tehran’s influence in Iraq, Syria and other parts of the turbulent Middle East, he said.
“The perception some Republican congressmen have of Iran, which may be accurate to some degree, is that it is a threatening state: look what they’re doing in Lebanon, Bahrain, Yemen and many other places, and what they say about Israel,” said Sullivan.
“The Saudis will move forward on their nuclear programme.”
US Senator Bob Corker, a Republican and chairman of the Senate Foreign Relations Committee, said it was too early to tell whether a deal that has been championed by US President Barack Obama was tough enough to halt Iran’s nuclear ambitions.
“It is important that we wait to see the specific details of today’s announcement, and as the P5+1 works toward any final deal, we must remain clear-eyed regarding Iran’s continued resistance to concessions, long history of covert nuclear weapons-related activities, support of terrorism, and its current role in destabilising the region,” he said in a statement to MEE.
Trita Parsi, president of the National Iranian American Council, said he hoped the framework deal would constrain Iran’s nuclear programme and secure “through diplomacy what neither war nor sanctions could ever have accomplished”.
“Today, we have only three or four remaining gaps to bridge. Some of the toughest and most intractable of issues now have a solution. We have never been closer to a final deal,” he said. “Small minds will obsess over what has been given. Great minds will celebrate what has been gained.”
A spokesman for UN secretary general Ban Ki-moon described a “political framework that paves the way for an historic comprehensive joint plan of action”. The UN Security Council is expected to become involved in the overturning of previous UN sanctions against Iran.
“That comprehensive agreement will provide for substantial limits on Iran’s nuclear programme and for the removal of all sanctions,” the spokesman said. “It will respect Iran’s needs and rights while providing assurances to the international community that its nuclear activities will remain exclusively peaceful.”
Kofi Annan, former secretary-general of the UN, said he hoped the agreement “will mark the beginning of a much improved relationship between Iran and the international community and an opportunity to strengthen regional security cooperation among Middle East states.” Iran Nuclear
All options including military on the table for Iran: Israeli minister