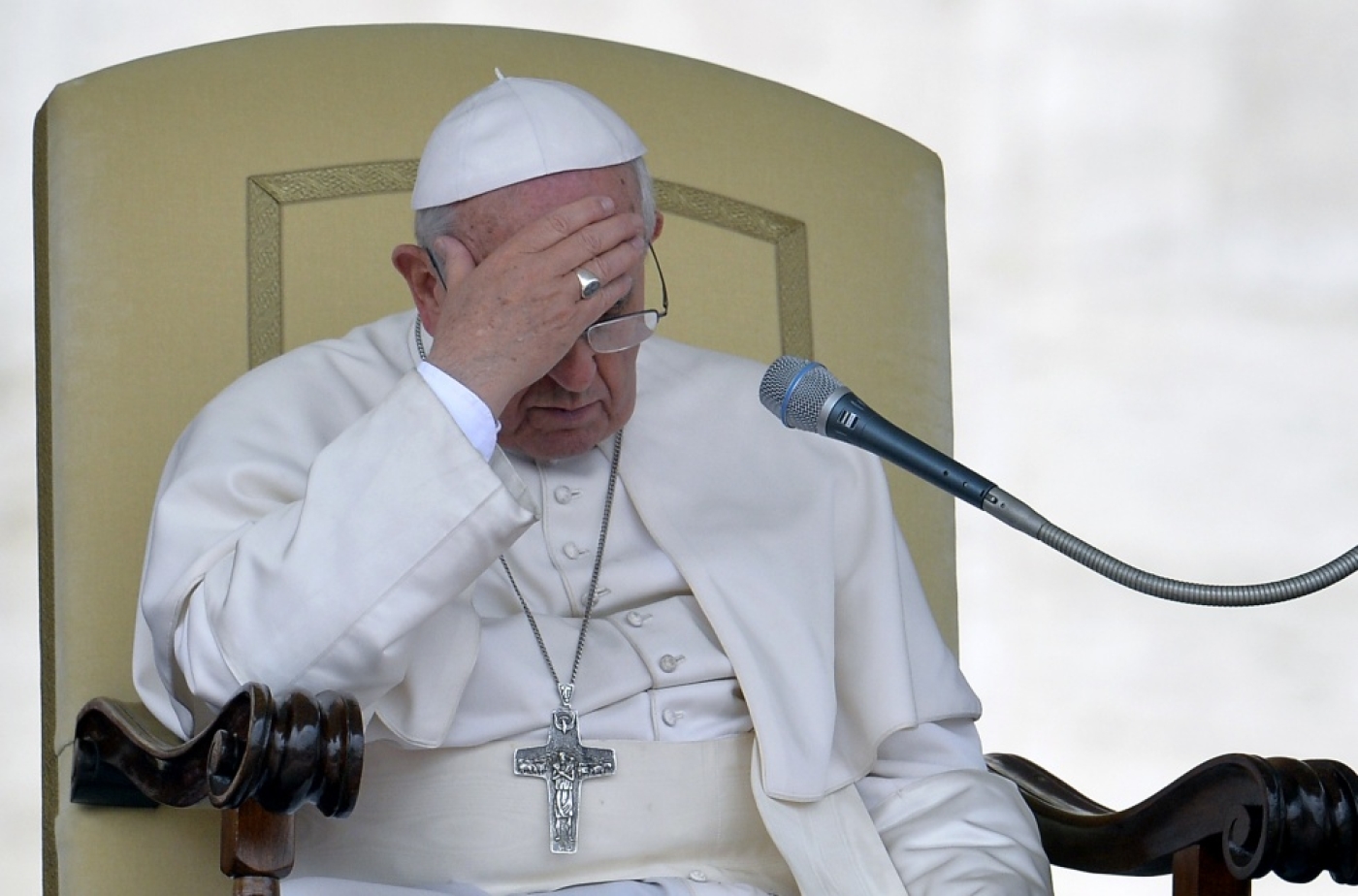 Pope Francis during his general audience in Saint Peter's square at Vatican on 23 April, 2014 (AFP)
By
MEE and agencies

Just weeks before Pope Francis visits the Holy Land, a string of racist attacks on Christian and Muslim sites is forcing Israel to reconsider how it should handle Jewish extremism.

The Roman Catholic church demanded Israel take action after Hebrew graffiti reading "Death to Arabs and Christians and to everyone who hates Israel" was daubed on its Notre Dame headquarters on the seamline between east and west Jerusalem on Monday.

"Mere coincidence?" said a statement by the Latin Patriarchate of Jerusalem, noting the attack on the property owned by the Holy See took place just weeks before the arrival of the pope.

"The bishops are very concerned about the lack of security and lack of responsiveness from the political sector, and fear an escalation of violence," it said, noting there had been "no gesture of solidarity or condemnation" from Israel's political establishment.

"We feel neither safe nor protected."

Despite hundreds of arrests, no one has been successfully prosecuted.

Israeli security officials believe the latest attacks have been the work of around 100 people, most of them activists from Yitzhar, a bastion of far-right settlers in the northern West Bank, Haaretz newspaper reported.

"Hate crime incidents against Israeli Arabs and Palestinians have risen steeply since 2 April, when the army destroyed buildings in Yitzhar," sources told the paper.

The attacks initially targeted Palestinian property in response to state-sponsored moves against unauthorised settlement outposts, but the scope has expanded considerably to become a much-more generalised expression of racism against non-Jews.

On Thursday, the daughter of late prime minister Yitzhak Rabin, who was assassinated by a Jewish extremist in 1995, said the atmosphere was of great concern.

"The current climate reminds me of the atmosphere of hatred that reigned during the days leading up to my father's death," Dalia Rabin told army radio.

Police have made scores of arrests, but there have been no successful prosecutions for the attacks and the government has come up under mounting pressure to authorise the Shin Bet internal security agency to step in.

"It is the government's intention to use administrative detention against those carrying out so-called 'price tag' attacks," internal security minister Yitzhak Aharonovitch told army radio on Wednesday.

Administrative detention allows for suspects to be held without trial for up to six months. Such orders, which can be renewed indefinitely by a court decision, are almost exclusively used against Palestinians suspected of security-related offences.

At the meeting, attorney general Yehuda Weinstein said he would ask the courts to stiffen penalties against perpetrators of hate crimes, pledging to personally follow up on such cases, Haaretz reported.

And the two ministers agreed to ask the security cabinet once again to consider branding price tag attacks as "acts of terrorism".

A similar request presented to Israeli prime minister Benjamin Netanyahu in December 2011 was turned down.

But since then, the scope of the attacks has grown significantly. And with the pope due to arrive on 25 May, Israel is looking to ensure the visit goes off without a hitch.

"Security measures are being taken and prepared for this important visit of the pope, units are training and there is liaison between security here and (Vatican) security," police spokesman Micky Rosenfeld told AFP.

"We would do anything to prevent any incident whatsoever, on any level, be it criminal or terrorist among all the different communities."

Last month, the US State Department for the first time included a mention of "price tag" violence in its 2013 Country Reports on Terrorism.

The move was not well received in Israel, with police saying such incidents could not be compared with bloody nationalist attacks.

The head of the world's 1.2 billion Catholics, who has garnered a reputation as a reformer as well as a defender of the downtrodden since his election last year, has referred to his journey as a "pilgrimage of prayer".

Pope Francis's trip from Amman (Jordan) to Bethlehem and Jerusalem from 24 May to 26 May will aim to reach beyond the walls of Catholicism, and mark the 50th anniversary of a historic rapprochement between the Catholic and Orthodox worlds.

In an unprecedented move, Francis will be accompanied throughout by Rabbi Abraham Skorka and Islamic studies professor Omar Abboud - old friends of the Argentine pope from when he was the archbishop of Buenos Aires.

"Every gesture and word will be scrupulously analysed," Andrea Tornielli, a biographer of the pontiff, wrote on the Italian website Vatican Insider.

"This is precisely why the pilgrimage of a pope, who named himself after the saint of peace and has chosen two representatives of the Jewish and Muslim faiths as travel companions, can help renew dialogue," he said.

Security for the crowd-loving pope will be high after a series of hate crimes against the Catholic church and Muslims in Israel, and the Vatican hopes the visit will draw attention to the plight of the region's Christians.

On his first day, Francis will pray on the banks of the River Jordan for the victims of the Syrian conflict and meet some the families among the 600,000 refugees who have sought shelter in Jordan since the war broke out.

He will also meet with King Abdullah II, who has spoken out for Christians and called for their protection in the majority Muslim region.

The world's first Latin American pope will travel to Bethlehem, the site revered as Jesus's birthplace in the Palestinian territories, before meeting children from the Aida, Beit Jibrin and Dheisheh refugee camps.

He will visit Jerusalem, claimed by both Israelis and Palestinians as their capital, and any reference he makes to the West Bank wall of separation, Palestinian prisoners or Israeli settlements will be closely watched.

Francis will also stop to pray at the sacred Jewish Wailing Wall, before visiting the Yad Vashem Holocaust memorial site on the western slope of Mount Herzl.

He will meet the Grand Mufti of Jerusalem - the Muslim cleric in charge of Jerusalem's Islamic holy sites - on the Temple Mount, which is considered Islam's third holiest site but is also revered by Christians and Jews.

In an important step for relations between branches of Christianity, the 77-year-old pope will also meet with the Ecumenical Patriarch of Constantinople Bartholomew I  a leading figure in the Orthodox world.

This comes half a century after an encounter between Patriarch Athenagoras and Paul VI - the first rapprochement between Catholicism and Orthodoxy since the Great Schism in the 11th century.

The leaders of Western and Eastern Christianity are to sign a declaration to overcome their differences in the Church of the Holy Sepulchre, venerated as the site where Jesus was buried and resurrected.

But hopes that the meeting could also pave the way to better relations with the Russian Orthodox Church have dimmed due to fallout from the Ukrainian crisis, with the Vatican accused by Russia of favouring Kiev over Moscow.

Christians are also unhappy he is not visiting Nazareth, where Jesus is believed to have grown up.

And Israelis have complained that Francis's biggest mass will be in Bethlehem.

An official at the Vatican, speaking to AFP on condition of anonymity, said of the visit: "The Vatican has decided to make everyone unhappy so no side tries to score points."