With a budget shortfall of more than $100mn, school is just one of many UN-run programmes for Palestinians that may be impacted 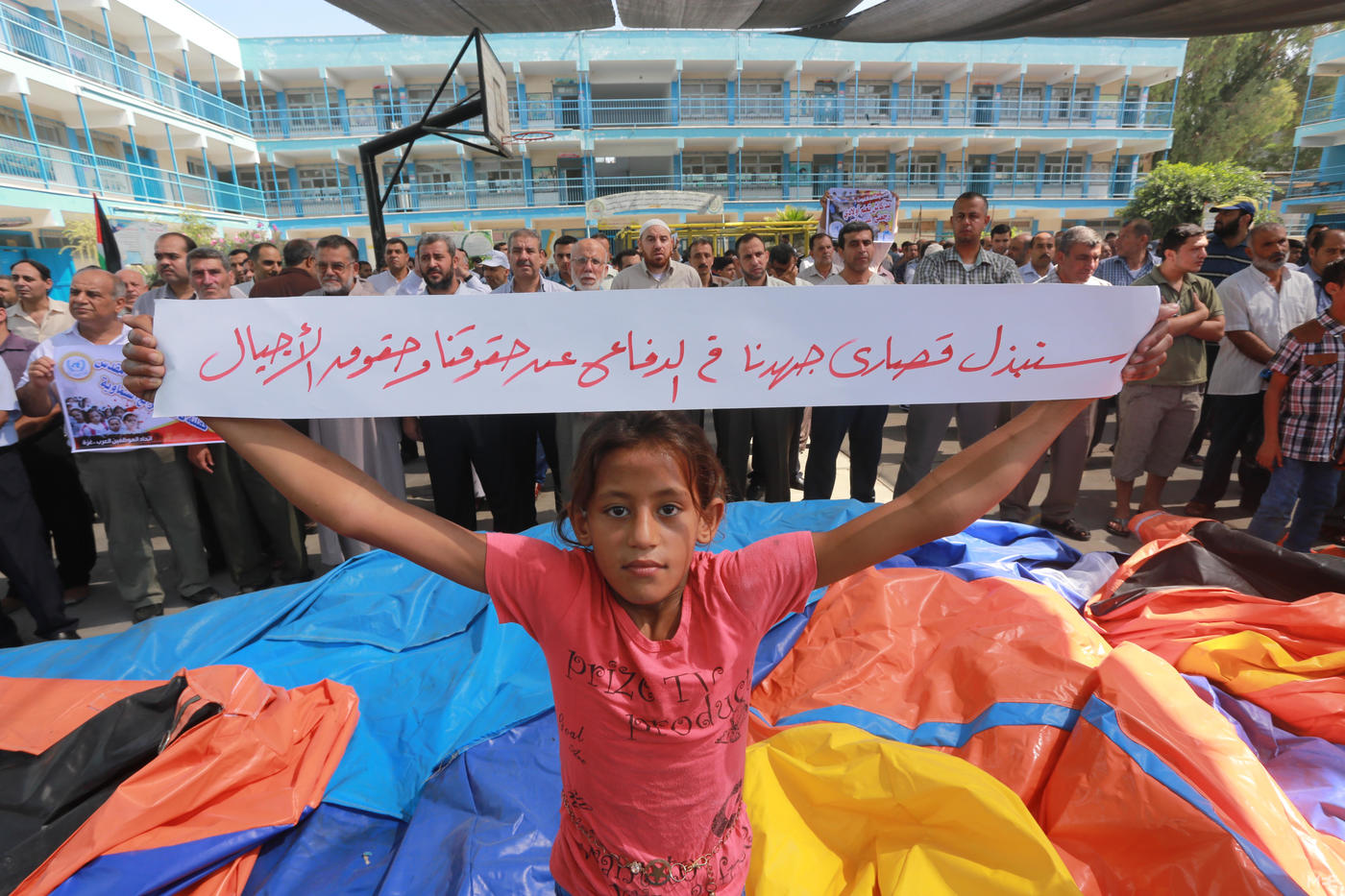 'We will do all we can to achieve our rights,' says one student's poster (MEE/Mohammed Asad)
By
Mohammed Omer

GAZA CITY – Parents of students hurled shoes and eggs at the UN office gates on Tuesday to protest at expected delays to the opening of the school year, just one of many services locals fear will be impacted by a major aid shortfall.

Protests have been held across the coastal enclave in recent weeks over public dissatisfaction in the face of cuts to programmes funded by the UN Relief and Works Agency for Palestinian Refugees (UNRWA).

While the financial needs of Palestinian refugees in the region are increasing by 6.5 percent annually, UNRWA’s budget grows by only one percent each year, UNRWA spokesman Adnan Abu Hasana said.

Now the agency says it needs more than $100mn to fund the services and programmes it currently provides for Palestinians, including schools.

As many as 700 UN-run schools in Gaza, the West Bank, Lebanon, Syria and Jordan could close as a result of the shortfall with around 500,000 Palestinian students, nearly half of whom are in Gaza, impacted, according to Abu Hasana.

"So far, there is no official decision to close any school," he told Middle East Eye. "But the fiscal deficit may mean we cannot open the schools to receive students next year."

Cuts across the board

The cuts to UNRWA’s services will significantly impact not only school children, but also Gaza’s entire population, 80 percent of whom rely to a large extent on the agency’s assistance.

Safa Hlail, 42, in Rafah, said she fears that health and food programmes in Gaza will be cut as a result of the budget crisis.

Already UNRWA’s occasional distribution of a $20 allowance for students has stopped as have daily food rations provided to students suffering from malnutrition.

“Before they cut aid, they should realise there are people like me who can’t afford medication or food,” said Hlail, the wife of a man who was injured during the 2008 war and has been bedridden ever since.

“Every few months, we get some cash assistance from UNRWA to help us cope with daily demands,” Hlail said.

“If it were not for UNRWA,” she added, “we could not get by or survive.”

‘Street will teach them nothing’

Parents and educators fear the long-term ramifications of closing the UN-run schools.

“When my children are not going to school, what else are they going to do?” said Hani Abu-Lebda.

“Being on the street will teach them nothing,” Abu-Lebda told MEE, adding that he feared that, without education, children will drift into radical groups and activities.

On social media, and amongst teachers who took part in mass protests in Jabalyia refugee camp, there are signs that UNRWA will offer leave without pay for teachers at its schools.

Suhail al-Hindi, head of Union of Teachers, said holding back the start of the school year is not an option.

“Education is a red line,” al-Hindi said. “We can’t, under any circumstances, allow the school year to be postponed, or cancel children’s right to an education.”

Cutting vital services will not only deteriorate the already difficult situation for those living in Gaza, but could also expedite an explosion of tension that has built up as a result of the ongoing siege and subsequent slow reconstruction after last summer’s war.

Fayez Abu-Shamallah, an analyst close to Hamas, said the budget deficit is “artificial”. The end game, he said, is to take the needs of refugees off the agenda of any final peace resolution.

“There are political powers behind this budget deficit,” Abu-Shamallah said.

Palestinian political parties, he added, have been too slow to condemn UNRWA’s apparent austerity measures.

Mahmoud Khalaf, coordinator of Palestinian national and Islamic parties, said that cutting UNRWA services is “unfair” and only aims to cut Palestinians off from rights that were accorded by the UN.

“Depriving half a million students [of] their right to education and dumping them into an unknown future only increases the suffering of refugees, and a huge danger of illiteracy and lost opportunities for the future of school students,” Khalaf said.

Khalaf said it is the job of the UN and donor groups to find necessary funding, not the job of refugees who have faced the dangers of displacement and migration for the past 60 years.

Meanwhile, Hamas politician Khalil al-Hayya said his movement views UNRWA’s shortfall with great concern and no less serious than the blockade of Gaza. Yet he said he is not convinced that the $100mn deficit should cause such heavy cuts.

“The problem of UNRWA is more of a political issue and not so much financial. Cutting services is meant to hit the issue of Palestinian refugees,” al-Hayya said.

If the issue is not resolved, more protests will likely spread across the Gaza Strip. Trade union leader Samira Abd Elaleem warned groups of activist women in Rafah not to let cuts weaken the struggle of Palestinian refugees.

“Please don’t let this pass,” Elaleem told the group of women. “The cause of the refugees is facing a very big and dangerous conspiracy. We must revolt.”