Turkish riot police try to disperse protesters with tear gas as they attack the police with fireworks, stones, and molotov cocktails (AA)
By
Lauren Williams

ISTANBUL: As night set in on the predominantly Kurdish and historically restive Istanbul neighbourhood of Okmeydanı Wednesday, young protester, Roni Chuckpar wrapped a chequered keffiyeh around his head, preparing for another night of tear gas and violence.

On Tuesday, he said, live rounds were fired and some Kurdish factions came to the protest armed.

Surrounded by graffiti images of Che Guevara and PKK slogans, charred remains of burning tires and broken barricades from the night before, the chants of "PKK" "Kobane", and the whistles of a new demonstration broke out behind him. Riot police and vans were stationed in preparation up the hill.

"There is a deadline for the peace process on the 15th of this month. After that we will see."

Turkey is bracing for further unrest after some 35 people, according to local media reports, including two policemen, were killed in three days of demonstrations across the country against the government's failure to assist Kurdish fighters in the flashpoint Syrian border city of Kobani in their battle against fighters from the Islamic State (IS).

Anger over Turkey's inaction and perceived siding with IS against the Kurds in the majority Kurdish city has erupted, threatening to reignite the decades-long civil conflict and scotching prospects for a peaceful settlement between separatist Kurds with the Kurdistan Worker's Party (PKK) and the Turkish government.

While US airstrikes continue to target IS positions, Kurdish fighters from Turkey, and the Syrian branch of the PKK, the Democratic Union Party (PYD), are proving the sole bulwark on the ground against the radical group as it advances on the key strategic city on the Syrian Turkish border. If the city falls, IS would control a stretch of territory along the border and a third border crossing, which analysts say would cement the group's supply route as they press on towards the west of the country.

Activists and officials say Kobane is close to falling to the militant fighters and warn of a return to conflict domestically in Turkey unless Turkey intervenes.

"If there is a massacre in Kobane it will set Turkey on a new path. There will be more deaths. Anything is an option at this point," said the head of the PYD's foreign relations committee from Europe.

He described it as a "battle to the death, saying "it will be a graveyard for the Kurds but we will fight until the very end."

"The politics in Turkey must change. The Turks are seen in the international community as a country that supports terrorism. They must provide the democratic rights to the Kurdish people or Turkey will end up harming itself."

Turkey had been reluctant to take a leading role in the US-led anti-IS coalition, originally citing fears for the safety of 46 consular hostages taken by the Islamic State in July in Mosul, Iraq. The release of the hostages, in what the BBC quoted security sources as saying may have been arranged via a prisoner exchange for some 180 fighters in Turkish prisons, was followed swiftly by the passing of a motion in parliament authorising force in Syria and Iraq, in what could have helped pave the way for more robust Turkish intervention.

Turkish tanks and troops are massed on the border, but analysts say, with policy differences with the US over the objectives of the intervention at an impasse, and fears of an emboldened Kurdish separatist movement controlling a stretch of territory linking autonomous Kurdish areas in Syria with the Kurdish heartland in Turkey,  the republic will refrain from engaging in the battle.

Associate fellow at the Royal United Services Institute think tank, Aaron Stein said disillusionment with the US policy vis-a-vis the Islamic State is holding Turkey back.

"Turkey is not focussed on simply degrading and destroying IS…but wants to address the root cause which they believe is the Assad regime," Stein told MEE by telephone.

"Turkey has said it is willing to supply ground troops with the caveat that they be deployed in highly specific conditions…essentially have the anti IS coalition expanded to an anti-Assad coalition, and the expansion would have to include air force."

"The United States has said that is not going to happen. I am afraid we are at an impasse."

But reluctance to intervene on the side of the Kurds is also a strong demotivating factor, analysts say.  And, while Turkey continues to sit on the fence on Syria, anger is brewing at home.

Turkey's perceived inaction has fuelled ongoing claims that Turkey has in fact supported the Islamic State through an open border policy that saw thousands of foreign fighters enter Syria across its borders.

Speaking at Istanbul's Blue Mosque on Saturday for the Islamic Eid al-Adha holiday, President Recep Tayyip Erdogan said the outlawed PKK and the self-proclaimed Islamic State "are the same for Turkey,” also accusing the  PKK supporters of trying to manipulate the situation in Kobani.

Sporadic clashes and demonstrations continued Thursday and Friday. On Thursday night, Turkish police reportedly arrested a number of IS supporters armed with sticks after another demonstration against Turkey's position at Istanbul University, in the latest of several clashes at the site, between those for and against the militant group.

"Most Turks think that IS is the threat and not the Assad regime," he said.

Making intervention conditional on taking up arms against the Syrian State, he said, "has not produced any positive result and in fact has produced very serious domestic problems."

"If Kobani falls, IS will not owe any of it to Turkey, and may even be fiercely loyal to the Assad regime for its protection against Turkey, not to mention the problems it will have with allies. The bargaining chip that Turkey thinks it holds will be lost and it will be accused of allowing IS to take over Kobani."

He said the chances for any lasting peace process with the Kurds is now "slipping away."

"And yet none of Turkey's goals will have been served. It is conceivable that Turkish policy in the region will end up in full bankruptcy."

Direct talks for a lasting peace settlement, launched by jailed PKK leader, Abdullah Ocalan and Ankara in March 2012 has largely lagged, with the PKK accusing Turkish authorities of dragging their feet.

Last week Ocalan warned that if Kobani fell to IS, all talks would be off. On Thursday, in a message conveyed through his brother and carried by local media, Ocalan gave Turkey a deadline until 15 October to act on peace with the Kurds, otherwise the process is dead.

RUSI's Stein said Kurdish anger over alleged support for IS was "incredibly strong" and unlikely to subside.

"The AKP have an election coming up and the idea of this dragging on is unthinkable.

But with the country growing ever more polarised, he said, "I am not sure how they can but a bottle on it." 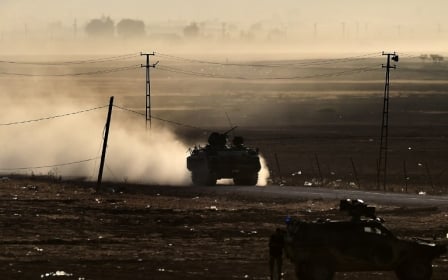