As police continue hunt for culprits behind Monday attack on a checkpoint, protesters in Saudi Arabia and Bahrain take to the streets An eastern province of Saudi Arabia has erupted in protest on Tuesday night after the funeral of Bassem al-Qadihi, who activists say was killed during a peaceful protest, but who Saudi authorities allege was involved in "terrorist crimes."

Hundreds of mourners thronged the streets of the restive majority-Shiite province of Qatif in a mass funeral procession for Qadihi, amid reports of a fierce gun-battle between Saudi security forces and people protesting Qadihi's killing.

The Saudi Interior Ministry announced on 26 September that Qadihi has been arrested, having been wanted on allegations that he launched armed attacks on civilians and security personnel and incited young people to violence.

A day later, local media reported that Qadihi had died in hospital as a result of injuries sustained during his arrest.

According to al-Akhbar, Qadihi was injured along with nine others when security forces, driving unmarked cars, fired live ammunition at a demonstration organised to protest the ongoing detention of prominent cleric Sheikh Nimr al-Nimr.

Activists on social media told the newspaper that Qadihi was taken to hospital, but that security forces later checked him out and took him to an unknown location, where he died.

The Interior Ministry gave no statement on the incident at that time, but later announced simply that security services had tracked down the "fugitive" Qadihi, who had been "involved in leading a number of terrorist operations."

The statement made no mention of reports that Qadihi had been killed.

Protests in the wake of Qadihi's funeral were not limited to the eastern areas of Saudi Arabia – activists in Bahrain also took to the streets in a solidarity demonstration on Tuesday night.

They shouted “your martyr is our martyr” and carried a huge banner bearing an image of Qadihi’s face and the slogan “all solidary with you, Qatif.”

Qadihi's funeral comes as Saudi police continue to search for the culprit behind an attack on a police checkpoint in the eastern province of Qatif that injured a police officer on Monday night.

The attack, which occurred in the village of al-Awamiyah, is the second of its kind to hit the restive eastern province of Qatif within a month.

The Shiite minority of Saudi Arabia, which make up the majority of the population in Qatif, have long complained of violations of their rights by the central government.

Human Rights Watch alleges that the Saudi government “systematically discriminates against its Shiite citizens”, citing poor access to public education and government employment alongside unequal treatment in the justice system. 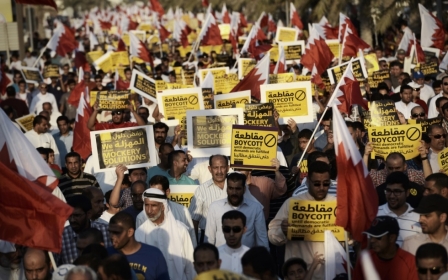