Two leaders of Yemen's Popular Congress Party, which has ministers in the current government, were assassinated on Friday by unidentified militants in the southern Lahij province, a security source has said.

"Two militants on a motorcycle shot the two officials down in the southern part of the province," the source told Anadolu Agency on condition of anonymity.

He added that the militants had immediately fled the scene after killing the two officials.

There has been no claim of responsibility for the attack, while the government has yet to issue a comment.

The Popular Congress Party is headed by ousted president Ali Abdullah Saleh, whose 33-year rule was brought to an end in 2012 by a popular uprising that had begun one year earlier.

Friday's killings were the first time officials from Saleh's party were assassinated in Yemen.

The poverty-stricken Arab country has been plagued by violence since the downfall of the Saleh government two years ago.

Along with battling a Shia insurgency in the country's north, the Yemeni government is also fighting al-Qaeda-linked groups in the southern provinces.

Tens of thousands of supporters of Yemen's Houthi Shiia rebels rallied Friday in Sanaa to press for the government to step down, as a large number of its backers held a counter-demonstration.

Supporters of Shia rebel leader Abdulmalik al-Houthi has been threatening a "painful" escalation against the government which they accuse of corruption.

The UN Security Council called on the rebels to end their armed uprising and warned of sanctions.

Three days of talks last week between authorities and the Shia rebels failed to reach a deal to end the impoverished country's latest political impasse.

"The people want the fall of the government. We will not back away. We will step up the pressure," the protesters chanted as they rallied in northern Sanaa.

They massed on a road leading to Sanaa airport after the weekly Muslim prayers.

At the same time, tens of thousands of government supporters rallied in southern Sanaa, calling for unity and solidarity with the cabinet.

An official close to the presidency told AFP that talks between the government and the Houthis could resume on Saturday.

"A meeting is expected to take place and the presidential committee tasked with leading the dialogue will present a new approach to end the crisis," the official said.

He said the plan calls for the creation of a new government of technocrats.

Yemen has been locked in a protracted transition since long-time strongman Ali Abdullah Saleh was forced from power in February 2012 after a deadly 11-month uprising.

Plans for a six-region federation have been rejected by both the Houthis and southern separatists, and the government is also battling al-Qaeda militants mostly in the south and east. 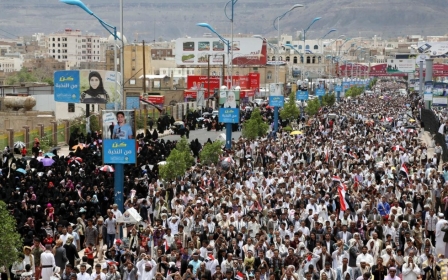 Inside Yemen
One soldier, 10 Houthis killed in Yemen clashes