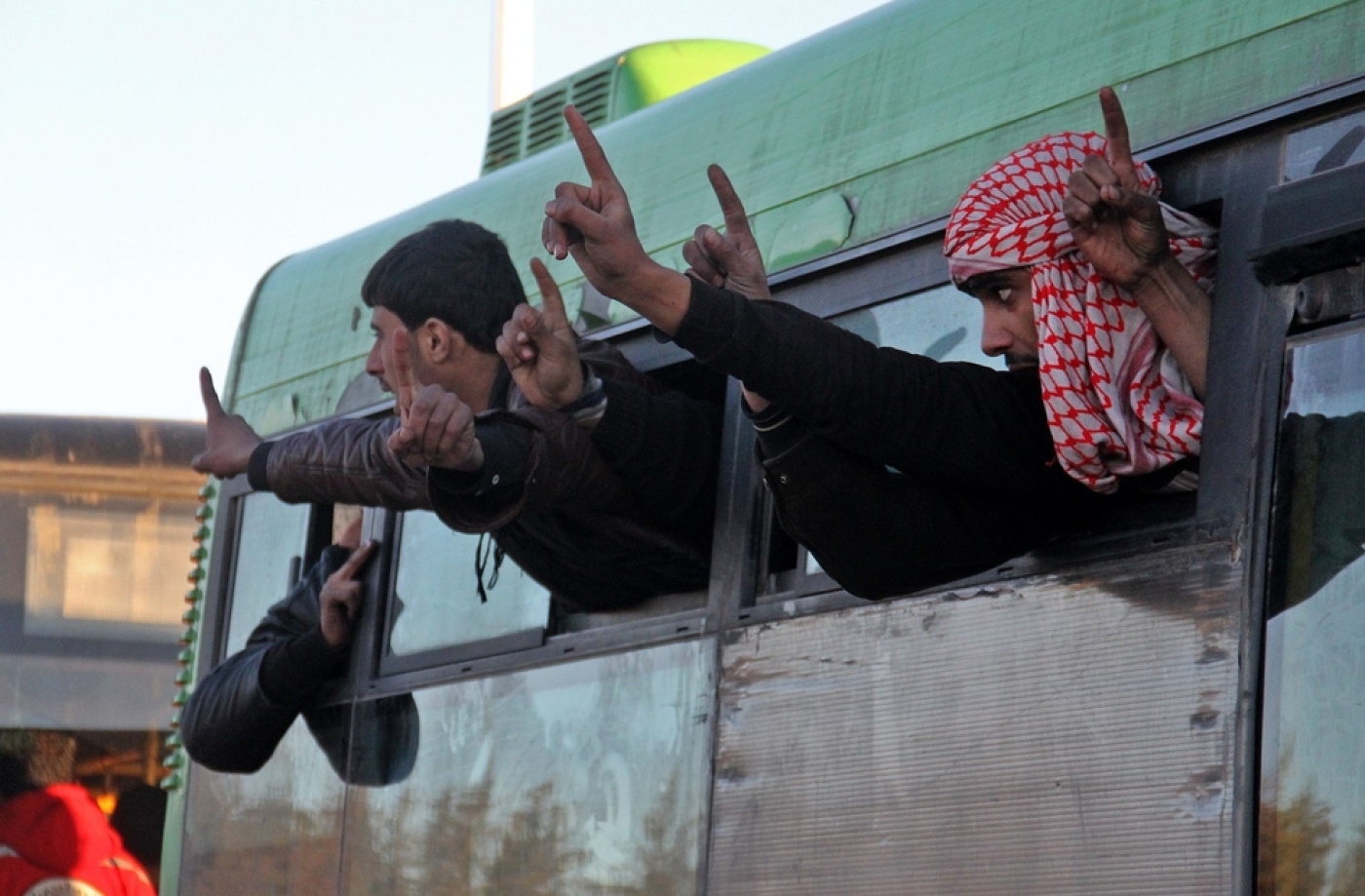 Russia estimated that 3,000 rebels had left Aleppo since Thursday (AFP)
By
MEE and agencies

Vladimir Putin has said he planned a "national ceasefire" in Syria and new international talks as evacuations of rebel fighters and civilians from Syria's Aleppo gathered pace early on Friday.

"The next step will be to reach agreement on a complete ceasefire across all of Syria," the Russian president said on the sidelines of an official visit to Japan.

"We are actively negotiating with members of the armed opposition, with the mediation of Turkey."

Putin said he had agreed with his Turkish counterpart, Recep Tayyip Erdogan, to hold peace talks on Syria in Kazakhstan's capital, Astana.

Russia's defence ministry earlier said more than 6,400 people, including more than 3,000 rebels, had been evacuated over the past 24 hours under a ceasefire deal.

Turkey estimated the number to be nearer 8,000. The Turkish foreign minister, Mevlut Cavusoglu, said on Twitter that more than 7,000 civilians had been evacuated in the first five convoys.

We have evacuated more than 7000 civilians in 5 convoys departing from East Aleppo. Our work continues.

Turkey said it had identified two sites on the Syrian side of the border for two refugee camps to house up to 80,000 people.

The evacuations began on Thursday under a ceasefire deal brokered by Turkey and Russia that would end years of fighting for the city and mark a major victory for the Syrian president, Bashar al-Assad.

Zakaria Malahifji, a Turkey-based official in the Fastaqim rebel group told Reuters that the number of buses being used had doubled to about 50, suggesting the speed of evacuations was increasing.

There was no sign, however, of evacuations from two villages besieged by rebels in neighbouring Idlib province, which were expected to be included in the deal.

Among those waiting to be evacuated from Aleppo on Thursday was Ahmad, a father of four, who declined to reveal his last name. He told MEE that he returned to Aleppo three months ago when rebels briefly broke the siege on the east side of the city.

He said he had since spent his life’s savings since to buy food, water and firewood.

Ahmad said that while he has nothing to do with the rebels or the opposition, he would not cross to government-controlled territory because he does not trust the forces loyal to Assad and that they fears that they may harm his children or sexually assault his wife.

A woman with two children at an evacuation point, who also refused to give her name, told MEE that she and her family had escaped multiple bombing attacks in Aleppo.

Her husband was killed a year ago, and her teenage son was wounded. A man she was looking to marry after her husband’s death also died a few months ago.

For the past few weeks, she has had no bread and relied instead on available rice and lentils to feed her family. She said acquiring water was a daily struggle.

She said she could not move to government-controlled areas out of fear for her children, citing reported executions in the Bustan al-Qasr neighbourhoods after Assad’s forces captured the area.

The Syrian president on Thursday described the Aleppo evacuations "history in the making".

"What is happening today is the writing of a history written by every Syrian citizen. The writing did not start today, it started six years ago when the crisis and war started against Syria," Assad said in a video posted on Twitter.

"The militants have been driven out of all the quarters that remained under their control as a result of the Syrian troops’ offensive," Poznikhir said.

'The last thing anybody wants to see... is that that small area turns into another Srebrenica'

- John Kerry, US secretary of state

But the US secretary of state, John Kerry, said what had already happened in the city was "unconscionable", raising concern for the "tens of thousands of lives that are now concentrated into a very small area of Aleppo".

"And the last thing anybody wants to see... is that that small area turns into another Srebrenica," he said, referring to a 1995 Bosnia war massacre.

The UN Security Council is due to discuss Aleppo on Friday at the request of France, which is calling for international observers to be sent as monitors.