'Refugees are IS in disguise': Bulgarian militia hunts migrants Climbing through dense bush in the border regions between Europe the EU and Turkey, a line of exhausted refugees snakes through a hilly pass before settling in a wooded area and setting down their meagre possessions before them.

But the looks on their faces are not of relief for a trek almost at an end -this is not a break in their march from war an poverty. Instead, they stare awkwardly at the camera and at the surrounding masked men, all in military fatigues, some carrying machetes, who have 'escorted' them to this place.

And soon they could be "pushed" back into Turkey by these same men, members of a right-wing militia which believes it is saving Europe from a "tsunami" of 77 million refugees and infiltration by Islamic State fighters.

This is Bulgaria in 2016. A member state of the European Union, where a militia called the Bulgarian National Movement Shipka (BNO Shipka) is openly tolerated by the government. Committed to carrying out deportations of those fleeing the Middle East and Afghanistan, they are often what first greets refugees at the border of the EU.

Vladimir Rusev, the executive president of Shipka and commander in chief of the attached Levski Vassil Military Union, paints a frightening picture of the coming storm in the EU: terrorist attacks, civil war and the social breakdown of an entire continent, caused by tired civilians carrying rucksacks and bottles of water.

“The migrants from Asia, Africa and the Middle East which come to Europe illegally are a huge threat to the European citizens and the national countries," he tells Middle East Eye. "The immigrants (for the bigger part) are ISIS fighters.

“In Turkey there are seven million immigrants waiting to invade the united European nations, and every day there are more and more coming, while from Africa there are 70 million more.

"Soon the social system of Europe will break down and there will be a civil war and the terrorist attacks from the ISIS fighters which came here under the disguise of ‘refugees’ will multiply.”

For refugees and migrants trying to reach Europe, the dangers of a sea journey are well documented. Rather than risking the approximately one in 100 chance of drowning, many have chosen to enter the EU through its land border with Turkey. Some attempt to enter Greece, but this often leaves them stuck at the heavily guarded Macedonian border.

This leaves one alternative: the 249km Turkish-Bulgarian border. Hilly and heavily forested, it remains only partially fenced.

According to the Bulgarian Ministry of Immigration, 200-300 are caught attempting to cross this border by police and border guards in any given week. Others are fall into the hands of paramilitary groups like BNO Shipka and Levski Vassil.

They are the largest of a number of anti-migrant paramilitary groups now operating in Bulgaria, and jointly patrol border areas for illegal migrants. Rusev claims 30,000 members, 800 of whom are operational at any one time.

Shipka associates on its website with Knights Templar International, itself attached to various fascist and Islamophobic groups including Britain First in the UK, and the far-right German politician Tatjana Festerling, who was expelled from the anti-migrant group Pediga for saying refugees should be shot at her country's borders.

Fiery rhetoric and claims aside, these groups operate more pragmatically on the ground. Patrols are claimed to be conducted unarmed, with the exception of airsoft weapons used to encourage migrants to “respect” them. Others, as video evidence shows, carry large hunting knives.

They are accompanied by Arabic-speaking communicators and medics, and claim to provide women and children with food and medicine. As well, they emphasise that they only apprehend "illegal migrants", and have separate procedures for those they deem as "Syrian".

But their methods are, according to EU law, often illegal. While some of the migrants and refugees that are captured are handed over to police, others are sent back across the Turkish border.

The "pushbacks" were outlawed by EU states in 2014. While these paramilitary groups claim that these migrants return “willingly” to Turkey, this could not be independently verified.

Regardless, local authorities appear to be turning a blind eye to the actions of these groups.

“The military groups are tolerated by the Bulgarian government and the groups are controlled very rarely and work together with the police,” said Mathias Fiedler from research group Bordermonitoring.eu.

Jelena Sesar, of Amnesty International, says that tolerance goes to the very highest levels of the Bulgarian government.

“Bulgarian authorities not only failed to condemn the vigilante groups, but initially actively encouraged them," she says "The prime minister publicly congratulated some of these groups for doing ‘excellent work’.

"It was only after several videos showing brutal handling of Iraqi and Afghan migrants surfaced that the authorities condemned the citizen arrests, which are illegal under Bulgarian law.

In spite of this, the arrests of migrants and refugees by these paramilitary groups have continued, evidenced by videos released publicly on an almost daily basis.

Frontex, the EU agency in charge of border policing, could not provide any details on arrests or pushbacks by these groups, despite operating significant numbers of personnel along this border.

“In interviews with migrants and human rights organisations during our recent visit to Bulgaria, we heard consistent accounts of summary 'pushbacks' of migrants and refugees, widespread abuse and theft by border police.”

Such actions are barely denied by the Bulgarian government, with the country’s PM boasting of returning 26,000 migrants to Turkey in 2016.

In August, Bulgaria received a scathing condemnation by the UN High Commissioner for Human Rights, Zeid Ra’ad Al Hussein for its “inhuman and unacceptable” treatment of refugees.

“Attacks and abuses against migrants and refugees are rarely, if ever, punished, especially if they are committed by police, border guards or other Government officials,” Zeid said.

“The Bulgarian government is not doing enough to challenge these alarming trends – indeed in the view of some, it is actually encouraging intolerance." 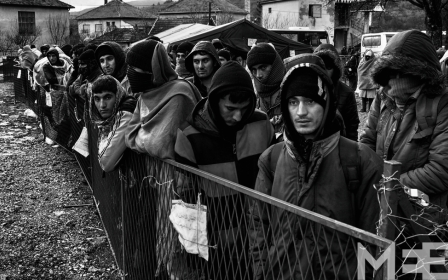