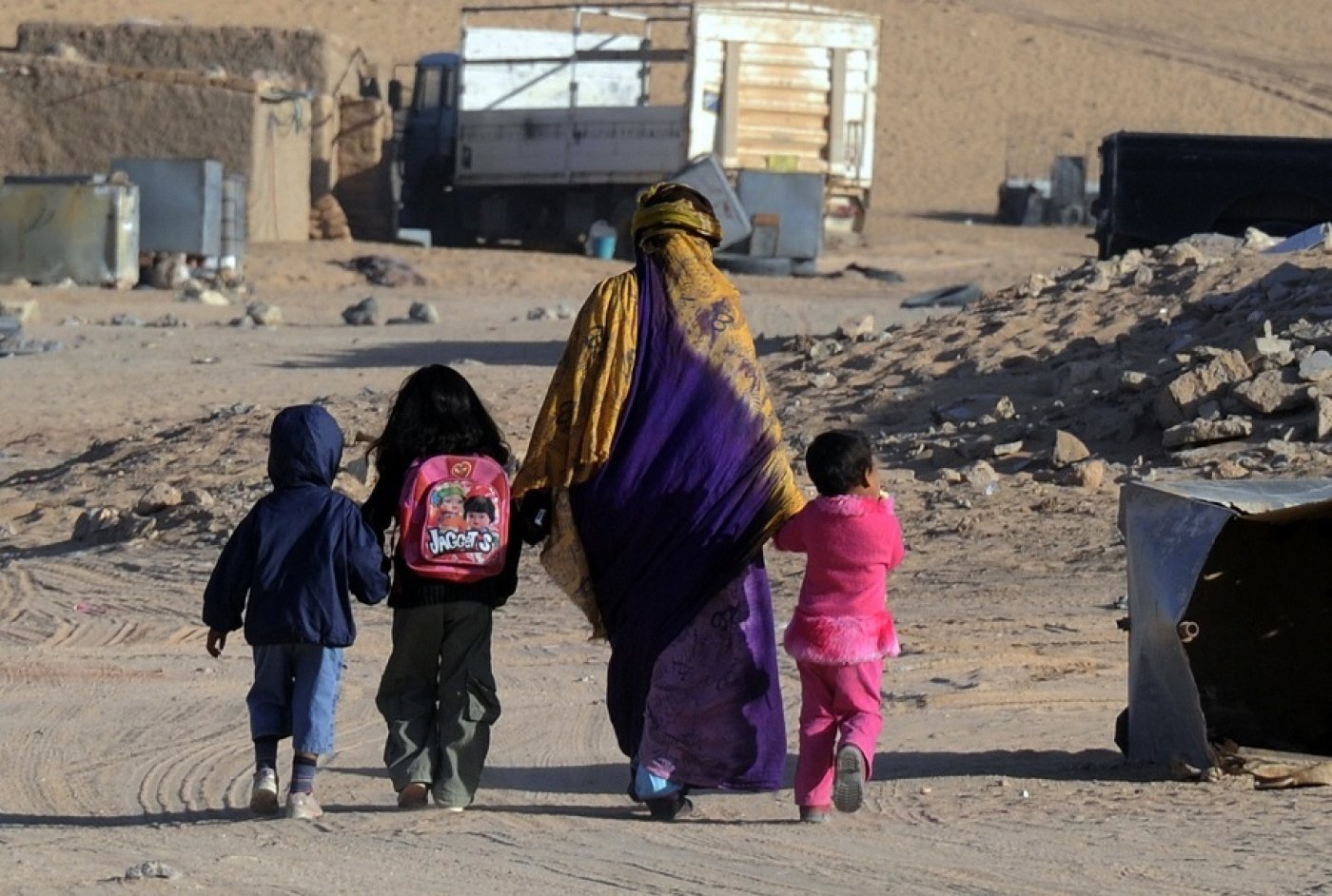 Senia Bachir's grandmother was in her early 30s on the November morning in 1975 when Moroccan soldiers began attacking her village in Western Sahara. As aircraft overhead began to bomb the area, she gathered up her six young children and took flight by foot. Over the years, she recounted the story to her granddaughter Senia many times, describing how she would walk by night to escape the 50°C heat and hide as best she could by day, in order to make painstaking progress through the lonely desert.

By the time they were picked up by two men in a truck and taken to safety across the Algerian border, Senia’s grandmother had lost three of her children; one to the desert, by dehydration, and two others to the machinations of war - landmines.

The young mother's eyesight was lost, but her memory has remained clear and her feelings unchanged.

“The Moroccans may have weapons, guns and airplanes,” she told her granddaughter. “We have patience and determination.”

Two generations later, Bachir preserves the gift of that story and many others like it, the tales of the indigenous Sahrawis uprooted from their land after the end of Spanish rule over the Western Sahara during a dispute between Morocco, Algeria and Mauritania.

Nearly 40 years later after her grandmother fled from advancing soldiers, Bachir lives in the Tindouf refugee camps on the far-western peripheries of Algeria, which are home to an estimated 165,000 people, an increasingly articulate and active youth movement and a long-held anger that threatens to boil over into violence once again.

Memories of that 1975 land dispossession, and what has followed it, are arguably at the heart of the discontent that Bachir, a young Sahrawi activist and advocate, describes encountering among Western Saharans of all ages.

At the eve of Moroccan independence from Spain in 1975, a dispute arose over who would rule the semi-autonomous region of Western Sahara. That same year, the disagreement erupted into all-out war between Morocco, Mauritania and the Algerian-backed Polisario Front, which according to Bachir, represents the will of the Sahrawi people.

Mauritania signed a ceasefire with Polisario in 1979, but an agreement between Morocco and Polisario was not reached until 1991. By that time, Morocco had finished constructing a wall stretching over 2,700 kilometres, separating areas of Western Sahara under Moroccan control from those to the north ruled by Polisario. As part of the 1991 ceasefire, both parties agreed to the formation of the UN Mission for the Referendum in Western Sahara, MINURSO.

After almost four decades of dispute, why are activists like Bachir only now warning that youth frustrations may turn to the more radical branches of the Polisario front?

Part of the reason lies in perceived inaction by the international community, compared to concentrated efforts elsewhere around similar issues.

A clear example of this is the story of MINURSO. Established in 1991 with the aim of facilitating a referendum to decide whether Morocco or Polisario would rule Western Sahara, the agency still has far to go before it comes close to completing its mission. Moreover, it has faced sharp criticism for allowing human rights violations to take place within its areas of operation.

According to Mohamed Salem Werad, another young Sahrawi activist, MINURSO is a "hostage to [United Nations] Security Council permanent members' interests" he told told the Middle East Eye. Bachir likewise dubbed it “a waste of time and resources”.

Despite a feeling of pessimism on the ground though it seems possible that this could be a landmark year for Western Sahara.

In two weeks' time, the UN Security Council will hold its 43rd debate to discuss renewing the mandate for MINURSO, the document that gives the body its power and outlines its year-long mission. For nearly a decade, the Security Council has faced calls to expand MINURSO's mandate and to allow it to carry out human rights monitoring in the disputed areas.

Proponents of this scheme, who include voices as dissimilar as UN Secretary General Ban Ki-moon and the Spanish actor Javier Bardem, who is part of an increasingly high-profile campaign, argue that such a change would lend the mission greater credibility, and help to curb the state-led crime that is rife in the territory.

Among those pressing for change is Western Sahara Action Forum, a UK-based NGO which has documented dozens of allegations of human rights violations by Moroccan forces in the region during the past year alone. The organisation argues that giving MINURSO observers more power is the only way to prevent abuses such as the extrajudicial killing of 13-year old Najam al-Garhi, which Werad, the young Sahrawi activist, alleges was carried out by soldiers on the Moroccan side of the wall.

Morocco, meanwhile, has been staunch in its opposition. In previous years, the country voted down similar proposals, and is making similar moves this time around as the debate approaches. According to recent government statements, Morocco's own monitoring systems are sufficient to prevent any further incidents.

UN officials point to positive steps that have been taken within the past year. Civilians from Western Sahara are no longer tried at military tribunals. In a recent statement, Ban Ki-moon also praised authorities for allowing UN Human Rights Council investigators access to the region.

Still, the UN has advised the Security Council to press further to guarantee “sustained, independent and impartial” monitoring in the area. The UN’s new and public position on this issue will undoubtedly put pressure on permanent members to pass the motion. Nevertheless, internal politics will still play an important role in negotiations. Previously, France had used its veto power to block bills that would extend MINURSO’s powers, in support of its old ally, Morocco.

In it, they call on him to “provide the UN Security Council with desperately needed leadership” on this issue. They warn of a need to take “pre-emptive action to defuse tension”, and raise the spectre of France’s messy intervention in Mali in early 2013. But other factors may also be at play.

'A curse and a blessing'

Analysts have speculated that relations with Morocco are not the only factor discouraging France from joining an increasing majority of Security Council members in calling for an extension of MINURSO’s powers. The Western Sahara, despite suffering from widespread poverty, is rich in natural resources, and activists worry that France’s economic interests mean it is unlikely to bow to growing pressure.

Among these interests are the joint French and Moroccan-owned tomato farms that have begun operating near Dakhla, the most inaccessible of the Sahrawi refugee camps. Western Sahara Resource Watch, another group monitoring events in the region, says that produce from these farms is sold in European supermarkets, labelled as “produce of Morocco”. Given the area’s sensitivity and the ongoing calls by Polisario for independence, observers question whether these exports are legal.

The European Commission, which has agreements with Moroccan authorities allowing the exports, disputes this. Roger Waite, spokesperson for agriculture and rural development, told MEE that since the UN considers Western Sahara a non-self-governing territory, Morocco is its “de facto administering power”, and the bilateral agreements are legitimate.

Another issue that has sparked protest is the prospect of oil and gas production in Western Sahara, which is looking increasingly likely as companies seek out new frontiers for exploration.

On 7 February, the French arm of Total renewed its contract, granted by Morocco in 2011, to explore for oil off the shores of Western Sahara. The ensuing controversy led Norwegian pension fund KLP to withdraw from the company, citing anxiety around “breaches of fundamental ethical norms”.

Other companies have also seen their activities in Western Sahara rocked by ethical concerns. Sustained protest by Sahrawi activists recently pushed Norwegian contractor Aker Solutions to pull out of a US-led offshore drilling project. But progress is slow and activists like Bachir, who is fuelled by tales of her grandmother’s sorrows, will not quieten their calls for change any time soon.