33 year-old photojournalist Luke Somers was killed in Yemen on Saturday during a U.S.-led rescue attempt after being held hostage by al-Qaeda 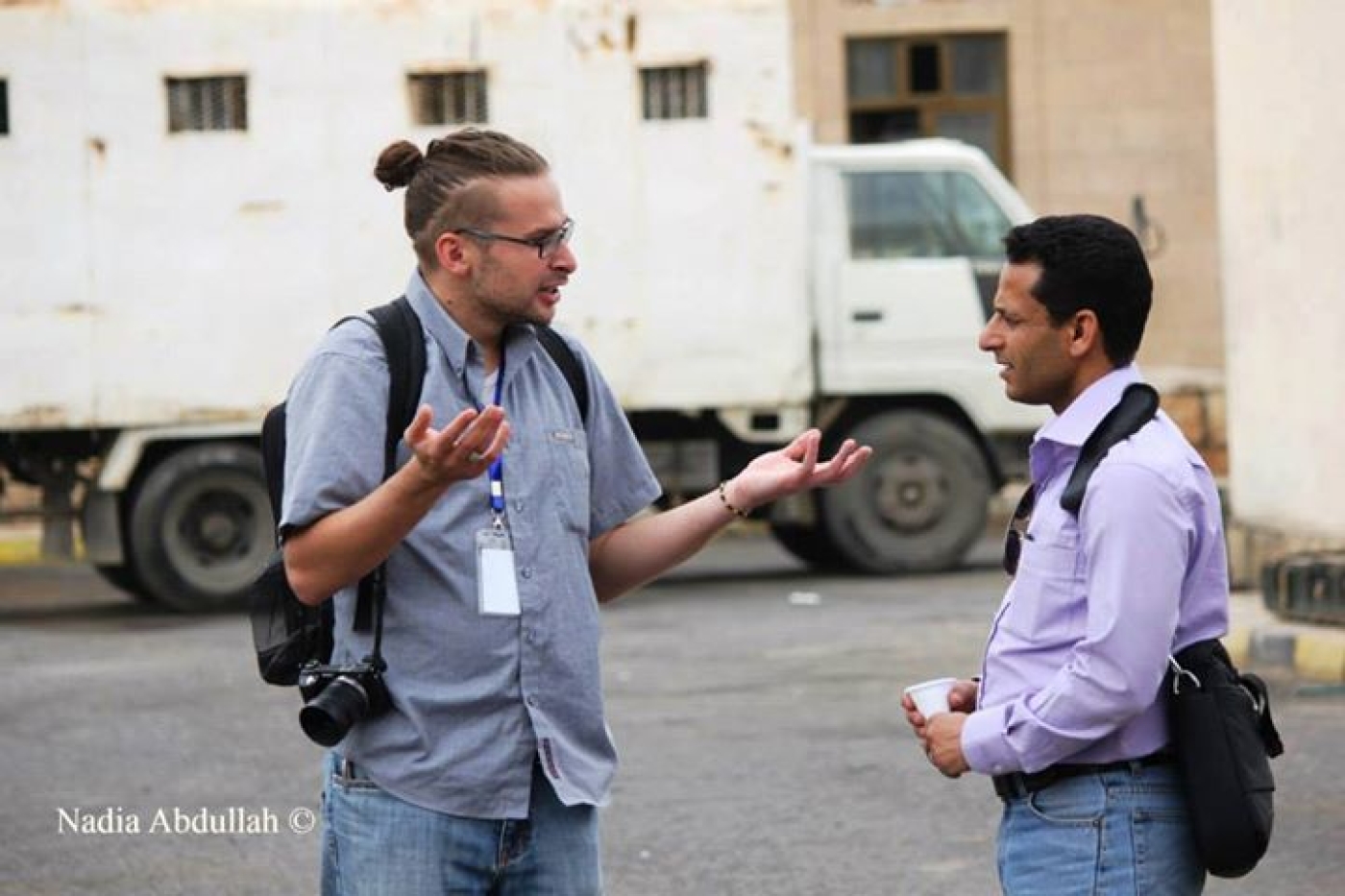 The first time I saw Luke Somers was at a demonstration in Yemen’s capital Sana’a. It was a muggy afternoon in early April 2011 and I was on a footbridge above a highway, filming thousands of female protesters in black veils calling for the fall of the government. Somers – tall and thin, with a ponytail and a satchel slung over his shoulder – was on the street below, pacing backwards in front of the women as they marched, his camera held up to his face. It was an important moment in Yemen’s 2011 uprising. Women had taken to the streets en masse, many of them for the first time. Local newspapers the next day called it the largest female demonstration in Yemen's history. Somers was the only Western photographer who covered it.

We crossed paths again later that year. Once, in a crowded hotel lobby, Somers grinned at me as he was pushed back by the body guards of a tribal leader he was trying to photograph; another time I saw him outside the gates of Sana’a University, writing in a notebook as he interviewed a protester who had been beaten up by the police. We acknowledged each other but never spoke. He seemed shy. There was perhaps an element of competition: we were both freelancers, chasing the same stories for outlets who had a limited appetite for news about Yemen.

Somers' reasons for travelling to Yemen were similar to mine. He was curious about the country, he wanted to understand its culture, learn Arabic and to try and make it as a photojournalist. Born in London and raised in the U.S, he had travelled to the Middle East before: to Cairo in 2006 as part of a degree in Creative Writing in Wisconsin, and later to Morocco, where he studied Arabic.

Somers arrived in Yemen in February 2011 as protests against the president, Ali Abdullah Saleh, broke out across the country. Security forces led a violent crackdown against demonstrators and foreign nationals were asked to leave. Somers got a job teaching English at a language institute. In the evenings, after work, he often took a motorbike taxi to Change Square, the protest camp demonstrators had assembled by Sana’a University.

Change Square was a city-within-a-city, filled with tents and big enough for a makeshift hospital, a mosque, a morgue, a dining hall, two art galleries and a cinema. Somers spent hours - often entire weekends - in the square photographing protesters, talking to students and chewing qat with tribesmen who had left the countryside to join the uprising. “He was fascinated by the Square,” said Amad al-Sharaba, who helped Somers, working as his translator and later becoming a close friend. “Some nights he would fall asleep in one of the tents and wake up late for work the next day at the language institute.” Despite being in the middle of a revolution, Somers found it hard to publish his work. The outlets he pitched to either had limited budgets for freelancers or had their own photographers on the ground. When he couldn’t sell them, Somers would send his photographs for free to Al-Jazeera and the Guardian to use on their live blogs.

“Luke wasn’t interested in mainstream news stories about al-Qaeda and terrorism, even if they were easier to sell,” said Alex Potter, an American who shared a house with Somers in Sana’a. “He felt there were more pressing stories to tell.”

In late May 2012, while I and other foreign journalists were reporting on an al-Qaeda suicide bomb attack targeting an army parade in the capital, Somers was in a hospital on the outskirts of the city photographing malnourished children for Al-Jazeera.

Working alone in tough conditions, and often with no guarantee of his photos being published, Somers shot incessantly. He posted over a thousand pictures to Demotix, a website used by freelance photojournalists to share their work. He covered stories that many journalists missed: a youth bowling championship, a revolutionary alliance of protesters with hearing and speech impediments, orphans taking part in a drawing competition, students painting murals on the walls of a bullet-ridden school in Sana’a, residents of the old city protesting over water shortages.

The Yemenis who knew him say Somers was aware of the risks. At the Yemen Times, where Somers replaced me as a copy editor, he co-authored stories about al-Qaeda and their growing presence in the country; he knew about Judith Spiegel, a Dutch journalist who was kidnapped with her husband in 2013, and later released. When asked by a journalist with The Media Line if he feared for his safety, Somers said: “Yemen is safer than many parts of America where you wouldn’t go out alone at night. In Yemen I often come home late without any anxiety.”

When Saleh was finally ousted in 2012, I left the country. Somers was one of the few foreign journalists who stayed behind. When he was seized from a busy street in Sana’a by armed men in September 2013, he was working as an interpreter with the National Dialogue, a reconciliation process aimed at healing the country’s political rifts and moving it towards democracy.

Yesterday I spoke to Ahmed Abduljaleel, a Yemeni activist. He recalled meeting Somers shortly before he got the job with the National Dialogue: “I asked Luke: 'what are you doing here in Yemen if you don’t have a job? Yemenis are desperate to travel to America to find a job and you came here with no job and no money.’ He just shrugged and smiled," said Abduljaleel. "We became good friends after that.”