Messianic Jews are looking to replace the mosque with a temple, in the fashion of an ancient tabernacle for animal sacrifices 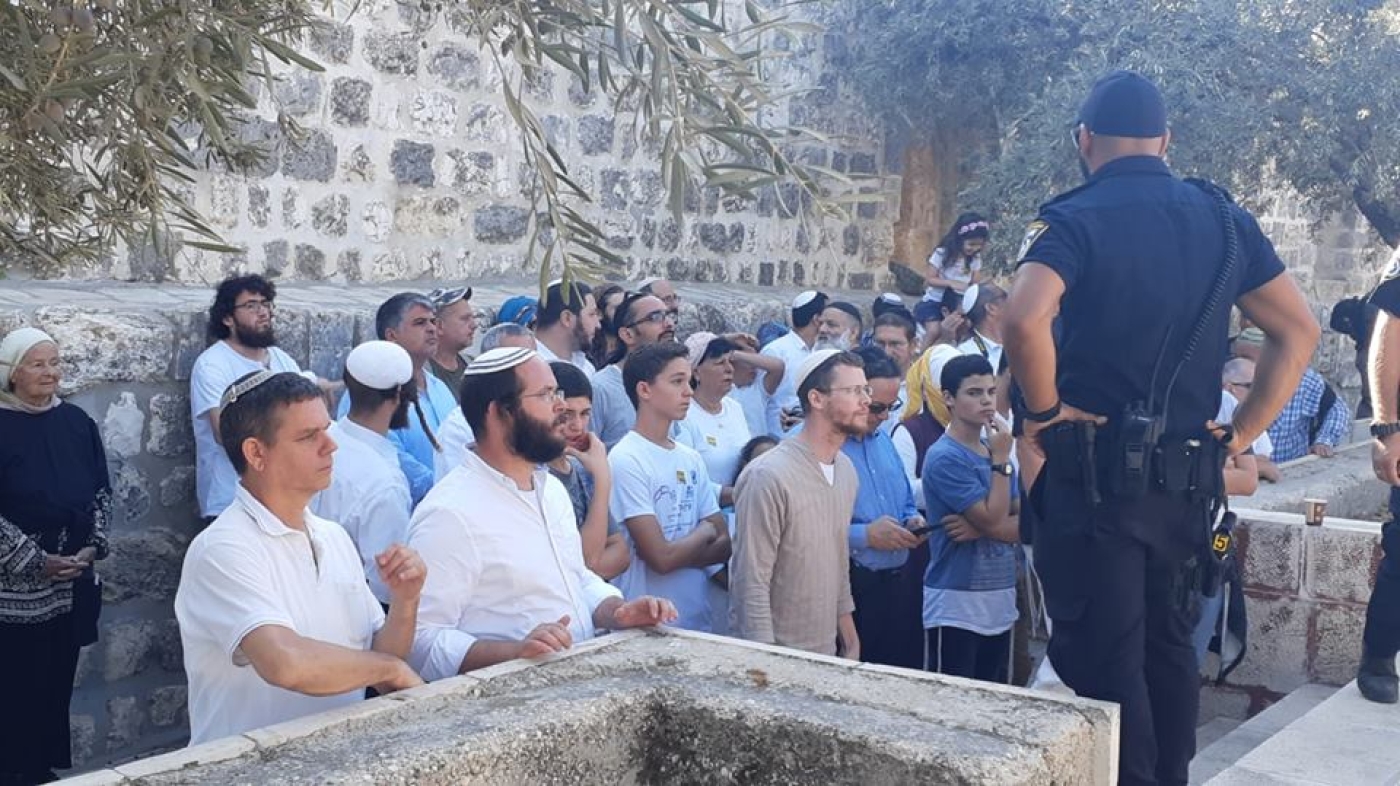 Thousands of messianic Jews climbed the Haram al-Sharif in Jerusalem this week, hoping to establish an increased presence on the site of the Al-Aqsa mosque and the Dome of the Rock, among the most important Muslim shrines in the world and potent symbols of Palestinian nationalism.

As Jewish-Israeli citizens across the country celebrated the holiday of Sukkot, Israeli security forces facilitated the ascent of the far-right Jewish groups - including Jews who aspire to the ushering of a new messianic Jewish age - to the Muslim holy sites, and inhibited the movement of local Palestinians, retaining their identity documents at the compound entrance.

Israeli forces erected barricades around the compound and throughout the Old City, giving it the feel of “a military barracks”.

There is a perceptible increase both in the number of settlers raiding Al-Aqsa, as well as in the religious rituals that they conduct on the site

“There is a perceptible increase both in the number of settlers raiding Al-Aqsa, as well as in the religious rituals that they conduct on the site,” Khalid Zabarqa, a lawyer and expert on Jerusalem and Al-Aqsa, told Middle East Eye. “They grow increasingly audacious.”

Videos uploaded to social media in recent days show Templar activists prostrating themselves in prayer on the Al-Aqsa compound and singing the Israeli national anthem, provocations that are in violation of the site rules.

As hundreds of right-wing Jews assembled at Al-Aqsa, they were joined by a commensurately large phalanx of police officers, says Zabarqa. Muslim worshippers who did not give the settlers a wide berth were detained for hours, he said.

“It’s not in Israel’s security interests, but they are trying to change the status quo, to draw us into a religious war,” Zabarqa added.

In the occupied West Bank, the scene was repeated as Israeli soldiers locked a cordon around the Balata refugee camp in Nablus, ostensibly to protect over a thousand Jewish settlers visiting Joseph’s Tomb, a nearby shrine established by Samaritans 1700 years ago, now revered by Muslims and Jews.

In recent weeks, posters have been plastered throughout ultra-Orthodox Jewish neighbourhoods of Jerusalem, extolling religious residents to ascend to the Haram al-Sharif, or Temple Mount, over the Jewish holidays. Traditionally, ultra-Orthodox Jews have steered clear of the site, holding that Jews may not approach the holy ground until a messiah emerges from amongst them.

Translation: Hundreds of Israeli settlers stormed on Thursday Al-Aqsa mosque in the city of Al-Aquds, on the occasion of the Jewish holiday of Sukkot.

On Wednesday, a Templar group protested in Jerusalem’s Old City over their inability to transform the Haram al-Sharif from a Muslim holy site to a Jewish one, calling its current occupants “foreigners who defile the holy hill”.

“The Western Wall is a symbol of destruction and exile, its time has passed. In 1967, with God’s grace, we returned to the Temple Mount not to ascend it as tourists – woe, what shame! – but to ascend it as Jewish people, who will soon establish the third temple,” Temple Mount faithful founder Gershon Salomon told Israel Channel 7.

In 1984, Jewish terrorists amassed explosives and plotted to bomb the Dome of the Rock, in the hope that it would raise the ire of Muslims around the world and trigger an apocalyptic clash of civilizations. The conspirators hoped that the ensuing conflict would galvanise messianic sentiment amongst Jewish citizens and allow them to erase the separations that exist in Israel between synagogue and state.

The orchestrator of that bomb plot, Yehuda Etzion, was jailed for four years over his role in the incident.

Since that time, however, he has become a prominent member of the Templar movement, which aims to replace the Muslim structures with a Jewish temple, in the fashion of the tabernacle for animal sacrifices that stood on the spot of the Dome of the Rock 2,000 years ago.

Since that ancient temple was destroyed by Roman forces in 70 AD, Jews have made regular religious pilgrimages to the Western Wall, one of the containment walls of the Haram al-Sharif compound. The Dome of the Rock and the Al-Aqsa mosque were built on the spot 600 years later, and they have been Muslim shrines ever since.

The United Nations decision of 1947 to partition Palestine into Jewish and Arab states determined that Jerusalem would remain an ex-territorial international city, but it was split between Israel and Jordan in the bitter war that followed.

Twenty years later, Israeli forces conquered the Haram al-Sharif, the rest of Jerusalem, and all the other territories which were resolved to be part of a Palestinian state.

Although under Israeli occupation, the site is still managed by an Islamic Waqf, or religious authority. But far-right Israelis are attempting to cultivate support for an increased Jewish presence on the site, hoping to eventually evict Palestinians and extinguish their aspirations for full rights and a state of their own.

Templars were once considered a small fringe movement, but in recent years, they have found favour in the Netanyahu administration, receiving the endorsement of dozens of government lawmakers.