A truce has been reached between rival militias in Tripoli after a deadly face off saw five killed and over 30 wounded on Monday.

Clashes broke out early on Monday in Libya’s capital city as competing authorities continue to vie for power in the country. Rival militias linked to the UN-backed Government of National Accord (GNA) in Tripoli exchanged gunfire in the south of the city.

The fighting pitted the Seventh Brigade from the town of Tarhuna - to the southeast of Tripoli - against a coalition of armed brigades working under the interior ministry, including Misrata’s 301 Brigade, and the Ghnewa Brigade.

Guma el-Gamaty, a Libyan academic and analyst, told Middle East Eye on Tuesday: “Tripoli is important because it is where key institutions concerned with budgets and money are located.”

The Seventh Brigade has been stationed in the southeastern Gasir Benghashir district of Tripoli for over year, operating under the GNA’s defence ministry.

“Some militias are flexing and using their military power to exploit such institutions for financial gains,” Gamaty said, adding that fighting between militias for Tripoli should be seen with this in mind as they are looking to access “easy money.”

The GNA has relied on local militias to enforce law and order in the capital, as the UN-backed government has been unable to find a solution to the widespread arms in the country. Armed militias are in control of the airport.

The GNA, as well as other transitional authorities, has tried and failed to integrate the armed forces into a regular army, relying on militias to ensure the capital’s security.

This is not the first time militias have attempted to take control of more territory in the capital since the GNA, under the leadership of Fayez al-Seraj, took control of the west of the country.

In July 2017 clashes left at least four dead and over 20 injured, when forces loyal to the GNA battled rival militias loyal to another power centre in the west of the country, the Salvation Government.

Whilst the international community recognises the GNC's Presidency Council as the representative body of the country, the country is split in its support three main ways.

The PC, based in the country's western capital city Tripoli, was welcomed by much of the population with great optimism, taking over as it did during a time of great financial crisis and instability.

However, over the two years in which it has been somewhat in power, public support for al-Serraj and his government has plummeted. The Government of National Salvation, which presides over the General National Congress elected in 2012, is also in Tripoli.

Finally, there is the third grouping in the east of the country, comprising various authorities, including military forces loyal to general Khalifa Haftar and the House of Representatives.

All three have failed to engage in successful peace-making efforts, while Haftar has repeatedly issued threats that his forces would soon take over Tripoli.

The three power houses in the country have all had their sights set on the capital, with each enjoying backing from external powers.

The UN-backed GNA has the support of the United States and most of the international community, and is recognised as the only representative government, but Tripoli has been rife with clashes and instability ever since the GNA came into the city last year.

The government in the east has the support of the UAE, Saudi Arabia and Egypt, with the UAE breaking an arms embargo by supplying Haftar's forces with military supplies, according to the UN

Numerous Libyan actors have demanded a draft constitution be prepared and put to a referendum, ahead of an election, but lawmakers in Tobruk have so far failed to agree on the text.

Renewed clashes come less than four months ahead of planned elections later this year. Even as the GNA continues to push for elections to take place, it remains unclear whether authorities will be able to guarantee freedom of speech and freedom of assembly in the run up to the vote.

Rights groups have warned against rushing into polls while violence prevails in the country.

Libya’s national electricity company warned of a possible “total blackout” following the clashes, which it said hit part of its network.

Power supplies in the city are already rationed. As temperatures in the oil-rich country reached 46C degrees last month, most of the western area was plunged into darkness for periods lasting as long as 14 hours in some cities, sparking protests.

"Our houses are just too hot this time of year," a Tripoli resident, Maha Abdullah, told Middle East Eye.

"We have no choice but to take the children to the beach. At least that way they can cool down in the water, and the temperature is slightly lower right by the sea." 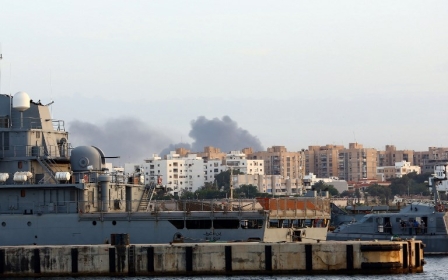