About 27,400 Rohingya Muslims have crossed into Bangladesh from Myanmar 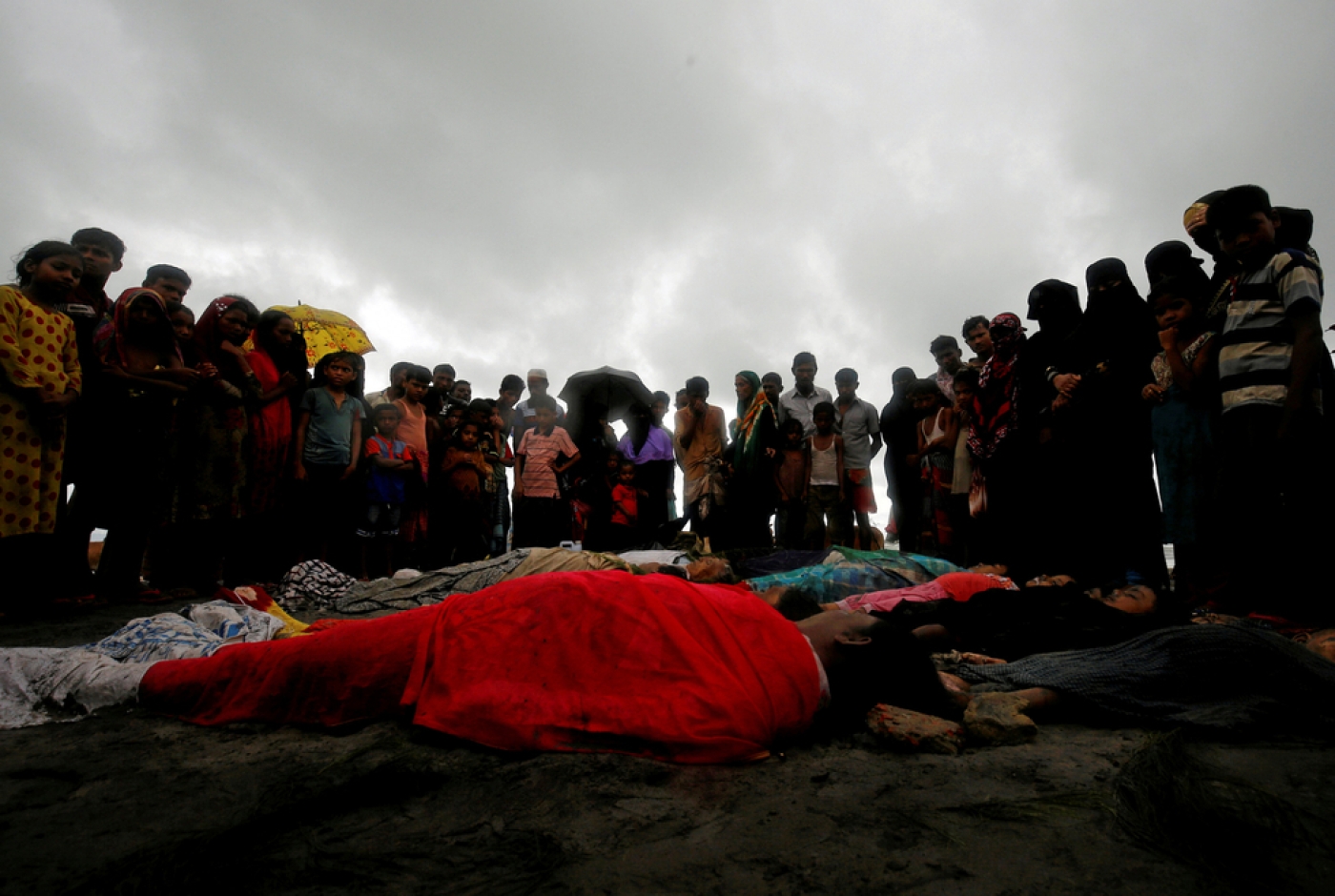 Bangladeshi border guards have recovered at least two dozen bodies from the country's shore in the past two days, as tens of thousands of Rohingya Muslims make desperate attempts to flee the worst violence involving the Myanmar minority in at least five years.

At the United Nations, the US ambassador to the world body, Nikki Haley, urged Myanmar's security forces to avoid attacking innocent civilians.

Haley condemned recent attacks by the Arakan Rohingya Salvation Army, but added "as Burmese security forces act to prevent further violence, they have a responsibility to adhere to international humanitarian law, which includes refraining from attacking innocent civilians and humanitarian workers".

She also urged security forces to ensure aid reaches those in need and to ensure the rights of all communities.

About 27,400 Rohingya Muslims have crossed into Bangladesh from Myanmar since Friday, three UN sources said, after Rohingya rebels wielding sticks, knives and crude bombs attacked police posts and an army base in Rakhine state, leading to clashes that killed at least 117 people.

One coastguard official who asked not to be identified said the migrants were travelling on "rickety inland fishing boats" unsuitable for the choppy seas around Bangladesh.

Myanmar said its security forces were carrying out clearance operations in northern Rakhine to defend against "extremist terrorists". Monitors said fleeing Rohingya reported that the army and ethnic Rakhine Buddhist vigilantes have unleashed a campaign of arson aimed at driving out the Muslim population.

Reuters reporters in Bangladesh on Thursday saw a huge fire on the Myanmar side of the Naf River.

Many villages were also on fire near the town of Maungdaw in Rakhine, where another Reuters reporter saw charred debris and smoke billowing from the forest.

The UN sources in Bangladesh said about 20,000 Rohingya were stranded in no-man's land between the two countries. One predicted the figure could jump to 30,000 later on Thursday.

"Many thousands of people are increasingly at risk of grave violations of their human rights," she said in a statement. "The worsening cycle of violence ... must be broken urgently."

Myanmar has evacuated thousands of Buddhists from Rakhine since the start of the fighting that has mainly killed Rohingya rebels, but also security force personnel, according to the Myanmar government.

The treatment of about 1.1 million Rohingya in Myanmar is the biggest challenge facing Myanmar leader Aung San Suu Kyi, accused by Western critics of not speaking out for a minority that has long complained of persecution.

On Thursday, the bodies of 11 Rohingya children and nine women washed up on the Bangladesh side of the Naf after their boat overturned, said Ariful Islam, a Bangladesh border guard commander.

The bodies of two Rohingya women and two children were recovered on Wednesday after Myanmar police fired on their boat, Islam said. A Rohingya leader in Bangladesh cited survivors saying both boats were overcrowded.

In the Bangladeshi border district of Cox's Bazar, makeshift camps for the displaced set up since similar violence last October were being expanded.

One arrival, Mohammed Rashid, 45, wore a surgical dressing under his eye, saying bullet splinters injured him after the Myanmar army opened fire on a group of Rohingya.

He said about 100 people made their way towards the border together, and he saw explosions and people dying.

"We hid in the forest for two days and then we were stopped at the border, but we got through. We heard that the houses in our village have burned down," Rashid told Reuters.

Chris Lewa of the Arakan Project, a Rohingya monitoring group, said it appeared Myanmar security forces were trying to drive out much of the Rohingya population. She said ethnic Rakhine vigilantes were "participating in the burning of villages".

Myanmar has said it has the right to defend itself from attacks, adding that security personnel were told to protect innocent civilians.

The Myanmar army has said it is battling rebels who continued to ambush government forces. Monitors said there have been few, if any, rebel attacks reported since Friday's initial offensive.

The violence marks a dramatic escalation of a conflict that has simmered since October, when a similar but much smaller series of Rohingya attacks on security posts prompted a brutal military response dogged by allegations of rights abuses.

Since yesterday, the number of burning areas in Rohingya parts of Burma's Rakhine state is up from 10 to 16: @HRW. https://t.co/hwkspvOInX pic.twitter.com/gFDeKudzMt

The Rohingya are denied citizenship in Myanmar and regarded as illegal immigrants, despite claiming roots that date back centuries.

More than 400,000 Rohingya live in Bangladesh after fleeing Myanmar since the early 1990s.

Most live in squalid and increasingly overcrowded camps in the coastal area of Cox's Bazar, and Dhaka has made clear it does not want more to come.

On Wednesday, Prime Minister Sheikh Hasina asked the United States to put pressure on Myanmar to stem the flow.

"We have given shelter to a huge number of Rohingya refugees in Bangladesh on humanitarian grounds and it's a big problem for us," she said, according to the state-run BSS news agency.

The International Organization for Migration joined UN Secretary General Antonio Guterres in appealing to Bangladesh to admit people caught on the border. Bangladesh has insisted it lacks resources to care for them.

Aid workers say contingency stocks of materials are low and their biggest problem is extreme overcrowding in makeshift settlements.