Russian bombs, rebel rifts and the fall of a key Syrian town The capture of Shiekh Miskeen is seen as a symbolic victory, according to military commanders (AFP)
By
Abo Bakr al Haj Ali

AMMAN, Jordan -  A combination of Russian air strikes and infighting among rebel fighters has led to the Syrian government's capture of a key opposition stronghold in southern Syria this week, several military commanders and local activists told Middle East Eye.

While the gain of Sheikh Miskeen in western Daraa province by Syrian Arab Army forces - backed by fighters from Hezbollah and Russian air cover on Tuesday - is not necessarily a death knoll for the rebels, it marks a significant shift in fighting on the war's southern front - and for some, one with suspicious timing.

Several military commanders told MEE that they believe that the government's capture of Sheikh Miskeen was a strategic victory executed more for messaging's sake than for any coherent military logic. At least one commander told MEE that government forces will not be allowed to progress further south, but this may not be a decision opposition fighters can take.

As the third round of Geneva talks are scheduled to begin on Friday, the message from Syrian President Bashar al-Assad and his Russian and Iranian backers is resonating: with Russian air cover, the Syrian army has proven capable of retaking ground from the opposition, both in Daraa and in Salma, outside of Latakia.

"Russian bombing played a major role in the outcome of this battle," Abu Khaled, a battalion commander with the US-and British-backed Southern Front of the Free Syrian Army, told MEE. "Since the operation began, regime forces were supported by Russian bombardment, and we knew early on that if this continued, the city would fall."

The city, on a main road and key supply line between Damascus and the Jordanian border, had been under opposition control since January 2015.

The government-led offensive on the city began in late December and initially targeted Brigade 82, a military base northeast of Sheikh Miskeen proper.

Two intensive stretches of Russian air strikes, one over the turn of the year and another at the weekend – in which more than 100 raids hit the city – resulted in a slow, day-by-day takeover leading to the government’s declaration of complete control and the withdrawal of opposition fighters on Tuesday morning.

The month-long battle killed 95 opposition fighters, according to the Daraa Office for the Documentation of Martyrs. No figures are available for casualties among pro-government forces.

But the city's fall also comes at a time of rapidly depreciating security in opposition-held areas in the province where kidnappings, assassinations and bombings have become everyday occurrences as a rift between once cohesive armed opposition factions has grown increasingly violent.

Two of the groups that have been fighting - the Southern Front and the Muthanna Islamist movement - took part in Sheikh Miskeen's failed defence. Local activists in Daraa told MEE they believe the schism between the two was a major reason for the city's fall.

Last Saturday, as Russian bombs fell on Sheikh Miskeen, several factions of the Southern Front, a secular rebel group which says it is fighting for a secular and democratic Syria, issued a statement, declaring war on Muthanna, one of the most powerful Islamist groups in the south of Syria.

The statement came hours after the deaths of four members of the Yarmouk Army, another group fighting under the FSA umbrella, when Muthanna members attacked the town of Nasib, which was under FSA control.

Muthanna responded to the Southern Front's statement, setting up checkpoints around Nasib which they later took down.

The crisis over the weekend came against the backdrop of accusations by the Yarmouk Army that Muthanna kidnapped Jacob Amar, chairman of the board of Daraa Province, on 28 December, along with a number of Southern Front leaders.

In a commando-style operation by elements of the Southern Front on 14 January, several prisoners, including Amar, were freed from Muthanna prisons. After the operation, Yarmouk military commander Abu Kinan al-Sharif said he had "penetrated security at the highest levels within the Muthanna movement, leading to the discovery of secret prisons holding people kidnapped by the group".

After these developments, the central courthouse in Daraa, which is controlled by the Southern Front, issued a statement on Saturday demanding that the executive power, composed of factions of the Southern Front, take control of several Muthanna headquarters-type locations, including a secret detention centre. It also demanded the extradition of several Muthanna leaders to the court – something that has yet to transpire.

The bloody rift between Muthanna and the more mainstream elements of the southern opposition is significant because these groups previously were able to operate, if not exactly alongside each other, in complementary ways in broader operations against the Syrian government.

The split along ideological lines may strengthen the FSA and Southern Front claims to moderate beliefs, a quality which sustains the groups' funding from Western countries and Jordan, but it also weakens the broader military opposition to the Syrian government.

The development will likely prove significant for both sides. For the government, this victory offers the ability to network transport routes and control logistics throughout the entire southern region, including Daraa, Sweida, Quneitra, Damascus and its environs.

It is also one of the most important lines of defence for opposition fighters before reaching the city of Nawa, Tel Jabiya and Tel Jumoua, several of the highest points in the south. Seen through the lens of the government's desire to secure Damascus, the strategic importance cannot be overstated – though considered against the whole of Daraa, still around 65 percent controlled by various opposition elements, it is a small step.

The start of this new phase of government-dominated battlefield dynamics in southern Syria has broader repercussions. For years Jordan, the US, Britain and Saudi Arabia, among others, have quietly – and less quietly – backed the moderate opposition. Now, Russia and Iran, through their battlefield proxies, are determining a new status quo, one whose dynamics will almost certainly be felt over the border in Jordan. 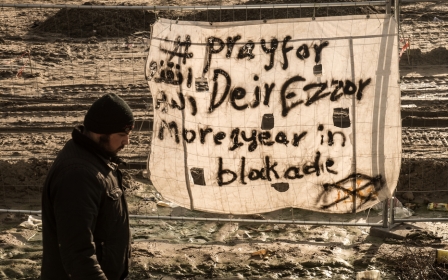