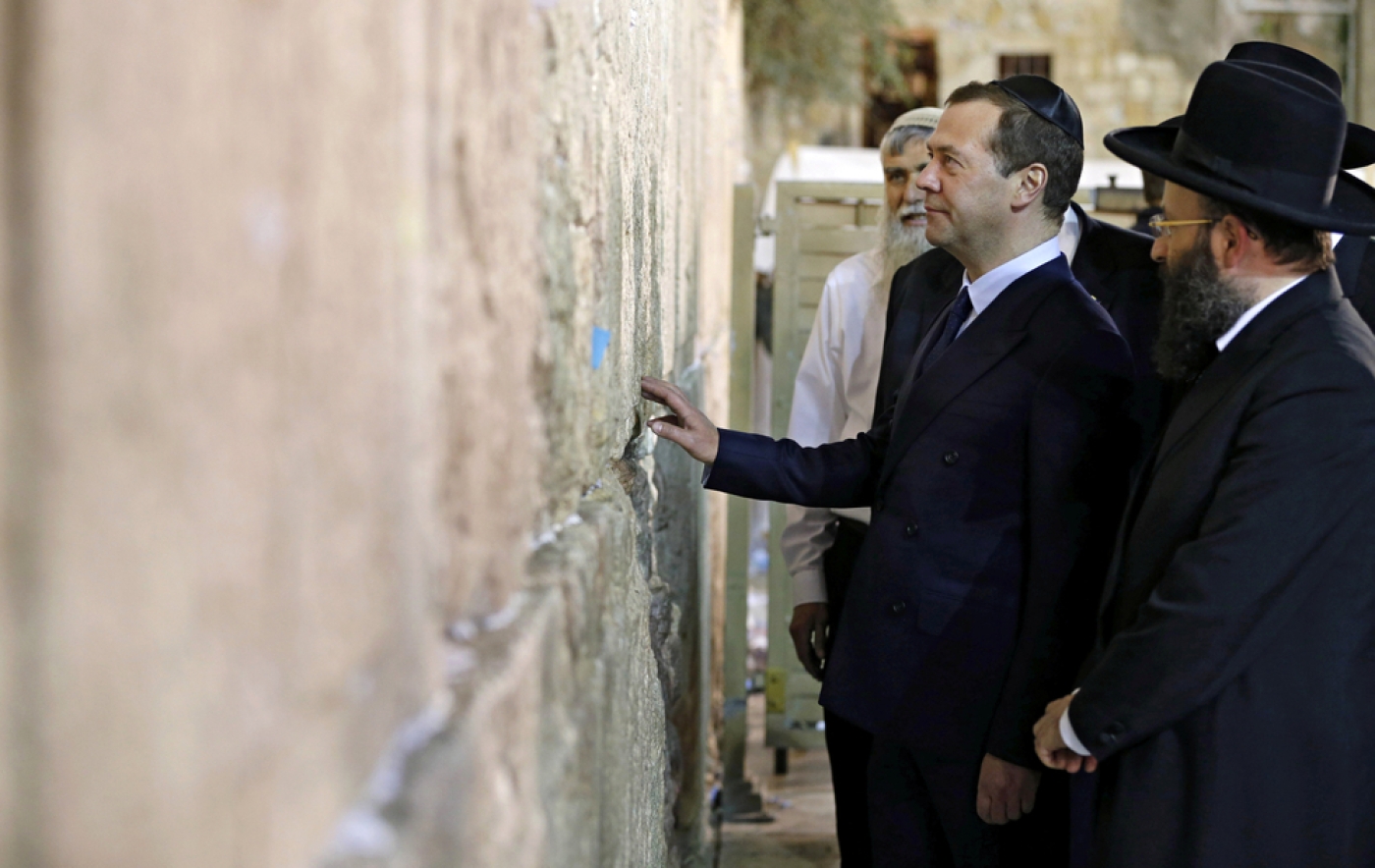 Russian Prime Minister Dmitri Medvedev is in Israel on a visit to mark 25 years of diplomatic relations between the two countries, and boost trades ties in areas such as agriculture.

On Friday he is due to travel to the West Bank to meet Palestinian Authority President Mahmoud Abbas.

"Over the last years, we did not develop our economic cooperation as well as we could have hoped. The current state of affairs - trade turnover between Russia and Israel stands at around $2 billion," Medvedev told Israeli TV station Channel 2.

"That’s not much and we used to have a trade turnover some 30 percent bigger than that but it shrank because of the global economic crisis and the devaluation of the ruble, as well as because of the decrease of imports into Russia," he said.

"Our two sides can reach a very fair level of trade relations," he said. "I’m not even mentioning here the large energy and gas projects we’re considering at present."

Agriculture was an area of particular interest to the Russian premier.

"On the Israeli side, supplies of farming produce - to the Russian Federation, I mean - make up about one-third of the trade turnover," he told Channel 2.

"Israel has splendid agrarian technologies and there’s much to learn from it in the field. Russian and Israeli agrarian centres and universities have special relations."

Russia has become an agricultural superpower in recent years due to exploding wheat exports caused by increasing state investment and sanctions that have forced it to cut food imports.

In light of these facts, Medvedev made a visit to Israel’s Volcani Institute, the research arm of the Ministry of Agriculture and Rural Development, to explore the role of advanced technology in increasing the quantity and quality of agricultural production.

According to Globes, an Israeli business news site, the Russian premier was shown "an innovative robot in the development stages designed for use in spraying agricultural fields and crops in hothouses. The robot is slated to reach the market in three-five years."

He was also shown a new instrument that tests the sugar level in apples, which the institute says "will help farmers decide when to harvest their apple crops according to the sugar level, whether to market the produce, and which market to send it to."

Medvedev, who was accompanied on his visit by Israeli minister of agriculture Uri Ariel, was also shown new storage solutions to store wheat grain, to prevent pests from damaging their quality.

In June 2016, Russia became the world’s largest grain exporter and is expecting a record harvest this year.

Medvedev’s trip got off to a rocky start, after he was challenged by Channel 2 about Russia’s support for a controversial UNESCO resolution last month that Israel said ignored Judaism's connection with Temple Mount, known in Islam as al-Haram al-Sharif (the Noble Sanctuary).

Medvedev maintained that the "subject has been blown out of proportion."

"UNESCO has made at least 10 similar decisions, worded almost identically to this one. Our country never denied Israel's or the Jewish people's rights to Jerusalem, the Temple Mount, and the Western Wall. These are clear rights and it would be absurd to deny them. This decision is definitely not made to be anti-Israel and there's no reason to politicise it," he told Channel 2.

Israel recalled its ambassador to UNESCO and blacklisted the UN body as anti-Semitic.

As if to underscore his remarks, Medvedev began his trip with a visit to the Western Wall in Jerusalem.

On Friday, the Russian premier will visit the memorial complex Catastrophe of European Jewry and lay a wreath to the Eternal Flame there, according to TASS, Russia’s state-owned news agency.

"Russia and Israel are brought together by opposition to anti-Semitism, other manifestations of xenophobia and inter-ethnic strife," Russian Deputy Prime Minister Sergey Prikhodko said.

"Together we stand against falsifying history, reconsidering the results of the Second World War, attempts to glorify accomplices of fascism, diminishing the decisive contribution of the Soviet Union to the victory over Nazi Germany, denying the Holocaust," he added.

In April 2009, the European Parliament passed a resolution on ‘European conscience and totalitarianism’ that called for the recognition of “Communism, Nazism and fascism as a shared legacy” and “an honest and thorough debate on all the totalitarian crimes of the past century.”

The move irked Moscow, which prides itself in the role the Soviet Union played in defeating fascism in Europe, and which hopes to find an ally in equally history-conscious Israel.

Russian and Israeli leaderships have met with increasing frequency over the past two years, with their meetings being increasingly dominated by the Syrian civil war.

Two weeks ago Netanyahu and Russian President Vladimir Putin held their sixth phone call of the year, according to i24 news, an Israeli TV channel. Netanyahu has also travelled to Moscow twice this year to meet with the Russian President.

Their talks focused on coordinating their stances in Syria, Israel’s claim to the occupied Golan Heights in southern Syria, and the Israeli-Palestinian conflict.

Two months ago, the speaker of the upper house of Russia’s parliament, Valentina Matviyenko, confirmed that Israel would continue to its joint efforts with Russia to find a political settlement to the Syrian conflict, after she had met with Netanyahu.

Russia offered to host Israeli-Palestinian peace talks in Moscow last September, but the proposal collapsed within days with the Israelis and Palestinians blaming each other for the talks’ failure before they even began.