Riyadh hopes to generate $100bn in non-oil revenue by 2020 and create six million jobs by 2030, but analysts warn of tough challenges ahead 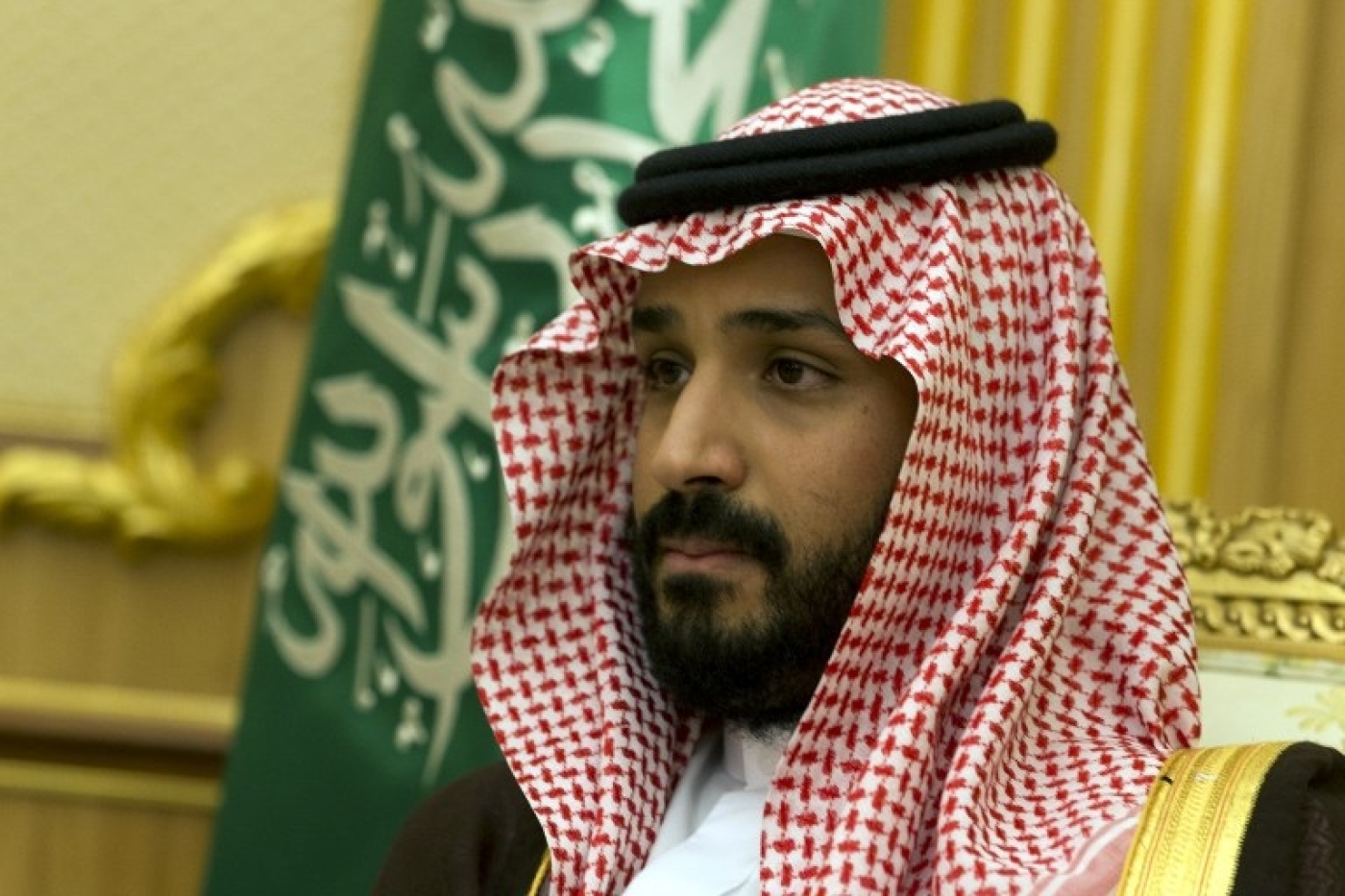 Saudi Arabia on Monday approved plans for a major economic revamp, aimed at diversifying its economy away from oil in the wake of a dramatic fall in oil prices.

Deputy Crown Prince Mohammed bin Salman (MbS) has been hailed as the key architect of the “Vision for the Kingdom of Saudi Arabia” that outlines how to shift away from hydrocarbons by 2030.

If the reforms bear fruit, Bin Salman told national media that Saudi Arabia could "live without oil by 2020".

"We have all developed an oil addiction in Saudi Arabia and this is dangerous and has hampered development in many sectors during past years," he told Saudi-owned al-Arabiya news channel.

Jane Kinninmont, deputy head of the Middle East and North Africa programme at Chatham House, told Middle East Eye that while Riyadh "clearly won’t be able to cut out its dependency on oil by 2020 - this statement is really a signal of ambition rather than a literal plan".

Bin Salman's vision for the country has started to spell out how the kingdom will invest in a range of developmental, economic and social programmes, in addition to introducing a string of budget and regulatory reforms.

The authorities hope that the reforms will bring about a fall in unemployment to seven percent from 11.6 percent, and that women’s participation in the workforce will increase from 22 percent to 30 percent. The deputy crown prince has previously said that the reforms will help Saudi Arabia to generate $100bn in non-oil revenue by 2020, and create six million jobs in non-oil sectors by 2030 by focusing on manufacturing, mining, tourism and healthcare.

Monday's announcements are to be followed up with a five-year “National Transformation Plan," set to be released in the coming weeks and expected to offer more details about how exactly the shift away from oil would take place.

"It will be difficult to change the system but it’s possible to change the economic balance if they submit to it fully and seriously," Courtney Freer, a GCC research officer at the London School of Economics, told MEE. "The strategy sounds great but they will have to have very clear benchmarks along the way."

Hot on the agenda have been details about how exactly Riyadh plans to go forward with the partial sale of the nationally-owned Saudi Arabian Oil Company, known as Aramco, which has been dubbed the “sale of the century” and will see the kingdom sell somewhere between three to five percent of the company in 2017.

"There are some important changes here, including the detailed information about what the leadership actually has in mind for Saudi Aramco," Kinninmont said.

Bin Salman told al-Arabiya that his government estimated Aramco's size to be "very big," with a value of anywhere between $2 trillion and $2.5 trillion.

Plans for the creation of a $2 trillion sovereign wealth fund were also announced, with Bin Salman saying that part of its assets would come from the Aramco sale.

This could provide up to $100bn in revenue, explained James Reeve deputy chief economist at Saudi Arabia's Samba Financial Group, which "would be great" although he warned that "valuing Aramco will be no easy task because its role is not purely commercial and has a broader 'social' role." 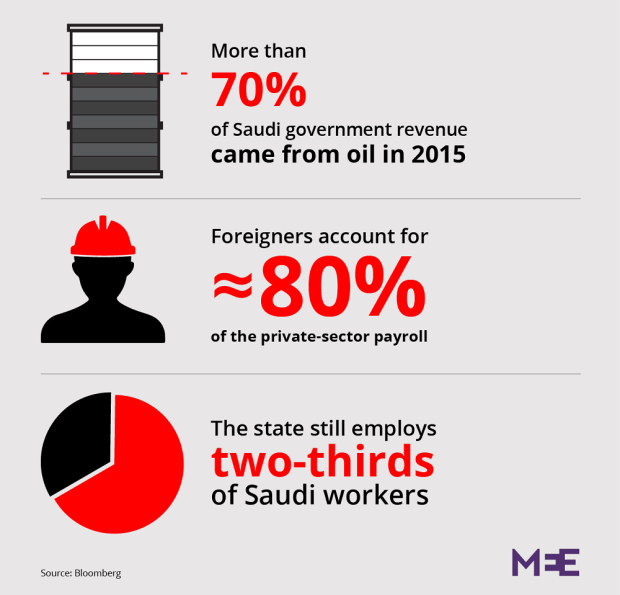 CNBC’s Nyshka Chandray said that the kingdom had already spent $1.25bn this year on consultancy fees in the run-up to the announcement, but analysts are divided about the feasibility of the targets.

“Shifting from an oil-based economy to something different is very difficult,” Gregory Gause, a professor at Texas A&M University, told Bloomberg. “The Saudis have been talking about it for decades, but have made little progress. So MbS [bin Salman] has his work cut out for him.”

Riyadh has been trying to diversify away from oil since the 1970s and now produces a larger range of exports than it did 20 years ago, but much of this has been confined to mineral mining and petrochemicals - the price of which tends to decline at the same time as oil.

As subsidies are removed, taxes increased and Saudis pushed into less well-paying positions, there are concerns that social tensions could grow. Foreign workers currently make up more than 80 percent of the private sector with Saudis traditionally opting for protected state jobs.

Bin Salman has made a point of trying to cushion lower and middle income Saudis from the worst of the cuts, saying that subsidies are meant for the poor and not the rich, and that "water and electricity is being misused by the rich people".

Over the weekend, King Salman sacked the country's water and electricity minister, Abdullah al-Hussayen, amid public anger over price hikes that went up by two-thirds late last year as low oil prices began to seriously bite the economy. Hussayen's tenure has been highly controversial since a March announcement when he called on citizens to get permits to dig their own wells to counter rising water bills.

"He [Bin Salman] has talked about providing cash transfers but how do you know who these people are when you don’t have income tax records in place?" she said.

However, with a young population – some 70 percent of Saudis are under the age of 30 – other analysts have argued that there is an appetite for reform and that bin Salman's governing style has proven popular.

The deputy crown prince holds an array of other positions - he is also defence minister and the chair of the Council of Economic and Development Affairs set up last year to oversee the economy, as well as the chair of a body overseeing Aramco.

"There has been resistance [to reform] but there has been growing recognition that something has to change so there is a bit more flexibility," Freer said.

"Also the fact that Bin Salman has so much power and holds so many positions… and that he wants to make so much change shows that older members of the ruling family have accepted a degree of change and think this is the time to do it."

Reeve also believes there has been a small shift in the royal family toward change, although he sees conflicting forces at play.

"The non-oil revenue goal is achievable, but it will require quite broad-based taxes and relatively rapid unwinding of subsidies," he said. "This will erode the long-standing compact between al-Saud [ruling family] and the people. Having said that, that rentier model has run its course and most of the Saudi people realise that. But of course, vested interests are deeply rooted and it will be difficult for the prince to bring everyone with him." 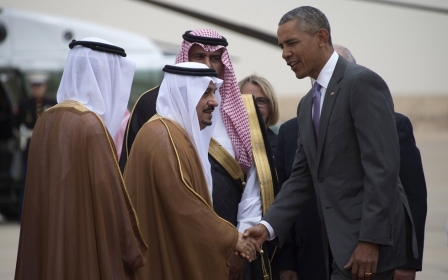 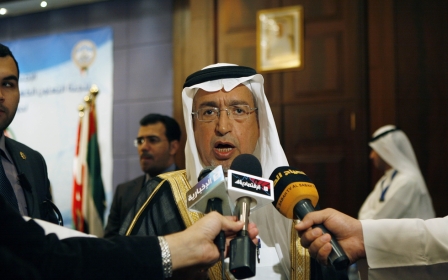 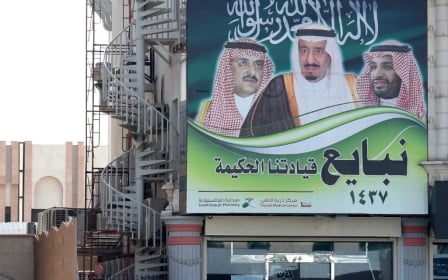