Saudi to host 2nd ever film festival despite cinema ban

The festival received more than 120 film submissions, of which around 66 met the requirements to be shown Saudi Arabia is rolling out the red carpet on Friday for its second film festival in seven years, but the deeply conservative country has one major problem - cinemas are banned.

More than 60 short films will compete for the Golden Palm Tree trophies crowning best drama, documentary and student film categories at a gala event attended by film and television celebrities from around the Arab world, festival director Ahmed al-Mulla said.

The kingdom practises an austere version of Islam that does not permit conventional entertainment venues such as cinemas so screenings will take place in an arts centre in the Gulf coast city of Dammam.

Organisers said they hope the five-day festival will open eyes in Saudi Arabia to the possibilities of film despite objections from some conservatives that cinema will "Westernise" the kingdom or corrupt its morals.

"I think we in Saudi Arabia have beautiful culture to tell the world," said film-maker Abdullah al-Eyaf, the head of the festival jury.

"Why should we wait for this country or that country... to tell stories about Saudi Arabia?"

Most of the film-makers being showcased are under the age of 25, said Mulla, who sees his role as helping them to develop.

As well as screening films, the festival will include workshops on scriptwriting, music and directing, and talks by industry figures from around the region.

Among the films to be shown is Grand Marriage, a documentary directed by Faisal al-Otaibi that tells the story of a two-week wedding ceremony taking place in the archipelago nation of the Comoros.

Haifaa al-Mansour, the country's first female film-maker, has been invited to attend but she lives outside Saudi Arabia and is unlikely to show up.

In 2013, her film Wadjda became the kingdom's first to be listed as a candidate for a foreign-language Oscar, although it did not make the final shortlist.

It told the story of a rebellious girl who dreams of owning a bicycle in a country where women's rights are restricted and the sexes strictly segregated.

Without cinemas, "sadly there is no way" to show such films publicly in Saudi Arabia, Mulla said, though many end up on video websites such as YouTube. Others are sometimes featured at small, special screenings.

As well as no movie theatres, Saudi Arabia has no film industry to speak of, said Eyaf, whose award-winning 2006 documentary Cinema 500 km highlighted the kingdom's theatre ban.

"The whole system is not there," Eyaf said, adding that having a festival is "one of the most important things" in trying to develop a film culture.

He was vague about why so many years passed between events, but said this year's festival was organised "in the right way" by the Society for Culture and Arts, a non-governmental group where he volunteers.

The festival received more than 120 film submissions, of which around 66 met the requirements to be shown, including that they be less than 59 minutes long and have not been shown on YouTube or on television.

"We received a lot of nice films," Mulla said, adding that 10 will have their premieres at the festival, where the screenings will be free and open to the public.

Thirty-four scripts which have not yet been produced will also vie for a Golden Palm Tree trophy.

The winning scriptwriters and film-makers will get grants to help fund future projects, from a prize pool totalling 180,000 riyals ($48,000).

Mulla said the festival entries cover a wide range of subjects including crime, society and history. There is even an animated movie and a "very strong" film about human rights.

He said that while the festival must ensure it respects Saudi Arabia's culture and traditions, there is no formal censorship.

"I think we can screen anything political," he said.

Mulla said he hopes cinemas will one day open in the kingdom because film is "part of culture, part of loving life". But first, he said, film lovers will need to convince "people who are scared of art and culture". 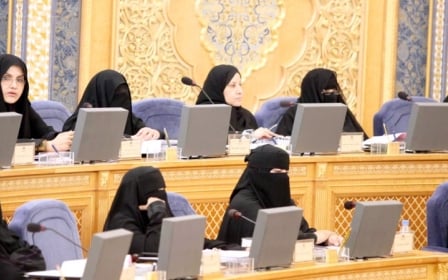