The Saudi Arabia-led coalition in Yemen is using internationally banned cluster bombs supplied by the US in military operations against Houthi rebels, Human Rights Watch (HRW) said on Sunday, amid reports of further civilian casualties caused by air strikes.

The international human rights organisation said that recently transferred US-manufactured munitions were being used in civilian areas contrary to US export requirements and also appeared to fail reliability standards required by the US for exported weapons.

"Saudi Arabia and its coalition partners, as well as their US supplier, are blatantly disregarding the global standard that says cluster munitions should never be used under any circumstances," said HRW's arms director Steve Goose.

One type of air-dropped cluster munition used by the Saudi-led coalition in Yemen, the US-manufactured CBU-105 Sensor Fuzed Weapon, had "harmed civilians in at least two attacks," Goose said.

"The evidence raises serious questions about compliance with US cluster munition policy and export rules," he said.

"The Saudi-led coalition should investigate evidence that civilians are being harmed in these attacks and immediately stop using them."

Cluster munitions are delivered from the ground by artillery and rockets, or dropped from aircraft and contain multiple smaller submunitions that spread out over a wide area.

A total of 118 countries have banned cluster munitions due to the threat they pose to nearby civilians at the time of attack and afterward.

Human Rights Watch said it believed the Saudi-led coalition, which also includes other Gulf Cooperation Council states, is responsible for all or nearly all cluster munition attacks in Yemen because it is the only entity operating aircraft or multibarrel rocket launchers capable of delivering five of the six types of cluster munitions that have been used in the conflict.

In recent years, the US has supplied the weapons to Saudi Arabia and the United Arab Emirates, both of which possess attack aircraft capable of delivering them.

One witness cited by Human Rights Watch described how he had watched bombs dropped on parachutes "explode like fireworks" as they neared the ground during an attack on the port of al-Haym  a in Hudaida province in December.

Hussein Saed said that one of the bombs had exploded on impact with the wall of his brother's home, sending metal fragments into a room and injuring his sister-in-law and her four-year-old daughter.

On Sunday, the owner of a sewing workship in Sanaa, the Yemeni capital, said that an air strike had killed two people including a 14-year-old boy and injured 15 others.

A search was under way for another employee still buried under the rubble of the building in the east of Sanaa, Faisal al-Musaabi told the AFP news agency.

But Houthi rebels, who have controlled Sanaa since September 2014, reported a higher death toll of 11 employees killed and four others wounded in the strike on the workshop.

The coalition has been carrying out air strikes against the Houthis since last March in support of President Abd Rabbuh Mansour Hadi's internationally-recognised government.

The United Nations says more than 6,100 people have been killed in Yemen's conflict since the coalition began its raids, about half of them civilians.

The coalition last month announced that an independent inquiry would examine charges of possible abuses against civilians in the conflict.

A panel of UN experts has said the coalition has carried out 119 sorties that violated humanitarian law, and it has called for an international probe.

Meanwhile, the United Arab Emirates announced that one of its soldiers taking part in the Yemen war was killed on Sunday and another was wounded.

A Yemeni military source told AFP that a bomb-laden vehicle targeted an Emirati armoured vehicle in Yemen's southern Lahj province, killing one soldier and wounding another.

A civilian also died, the source said, adding that the attack appeared to have been carried out by the Islamic State (IS) group, which is becoming increasingly active in the south.

The UAE has lost more than 70 soldiers in Yemen since the coalition launched its military campaign. 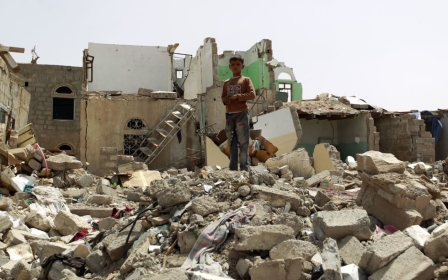 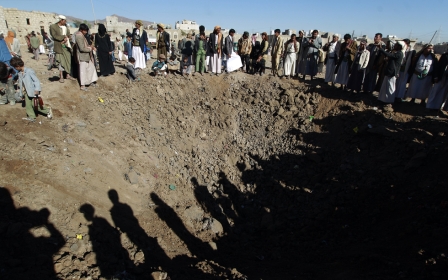