A 'security zone' in northern Syria? Easier said than done

Trump raised prospect of establishing 'security zone' in northern Syria. But how would such a proposal actually work? 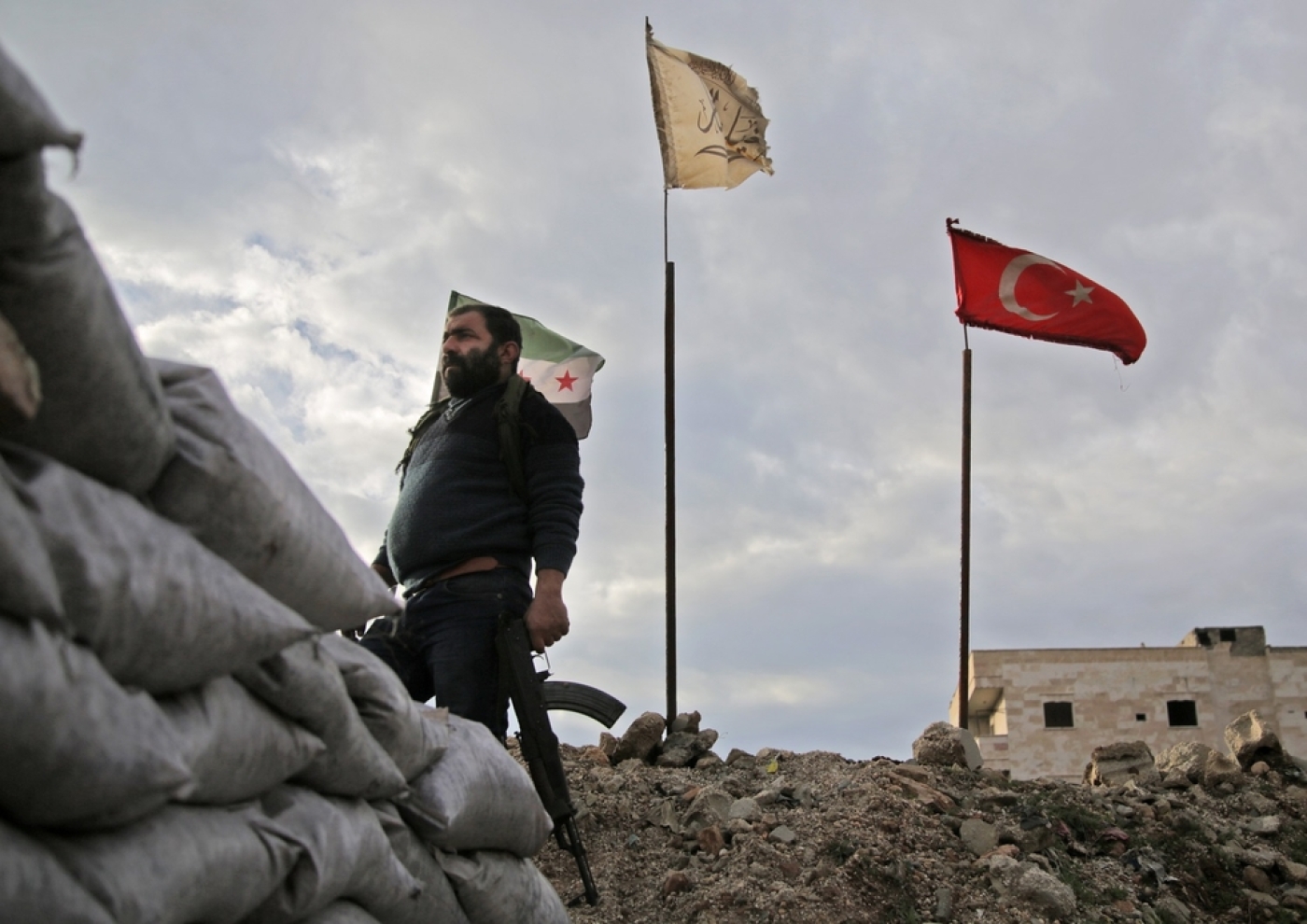 ISTANBUL, Turkey - Under pressure from opponents in the United States, President Donald Trump last week raised the prospect of establishing a 32km "security zone" in northern Syria to prevent a Turkish military operation against the People's Protection Units (YPG), a US-backed Kurdish militia.

Turkish officials, including President Recep Tayyip Erdogan, initially have appeared eager to accept such a proposal, as Ankara has pushed for a security zone to be set up since the beginning of the civil war in Syria.

Turkish media also reported this week that such a zone could facilitate the return of hundreds of thousands of Syrian refugees to their homeland.

Still, the implementation of this type of plan is easier said than done.

For his part, Erdogan has asserted that the zone must be under the control of Turkey and its allies. Washington, on the other hand, appears to have other priorities. 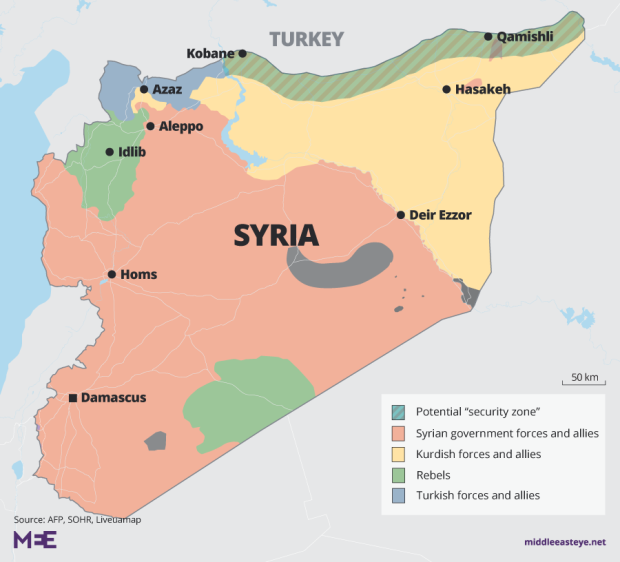 US military officials are working closely with their French and British counterparts on a plan to keep a hold on the territories in northern Syria, according to a source in Washington who was briefed by US officials this week.

"In reality, they still need to negotiate who will create, protect and administer the safe zone," said the source, who spoke to Middle East Eye on condition of anonymity amid the sensitivity of the subject.

"But it is very clear that they don’t want Turkish military presence in urban areas, such as Kurdish-dominated Kobani or Amuda. They believe this could be accepted by YPG," the source said.

Instead, US officials would like to see Turkish, British and French forces hold and patrol unpopulated areas in the countryside. The US, as reported by MEE last week, intends to maintain its de-facto, no-fly zone in the region.

Oytun Orhan, a Syria expert at the Ankara-based Middle East Strategic Research Center (ORSAM), said Turkey wouldn’t agree to any security-zone plan that doesn’t give ultimate control of the proposed area to the Turkish military.

However, he said Turkish military leaders are also wary of a large-scale deployment in urban areas and remain open to alternative solutions that won't overly burden them.

A report on Wednesday in Turkish daily Sabah, which is aligned with the Turkish government, appeared to support Orhan's comments.

Without referencing any sources, the Istanbul-based newspaper suggested that Ankara would prioritise a United Nations or NATO framework for the security zone, insomuch as that could provide it with international legitimacy.

Sabah also said Turkey and the US would jointly decide which armed opposition groups would guard the proposed zone.

US diplomats are considering whether to deploy the Syrian Kurdish National Council (ENKS), an umbrella group of Kurdish parties opposed to YPG rule, and its armed wing, Rojava Peshmerga troops, to guard Kurdish-majority areas, according to the source in Washington.

"Arab opposition groups that are incorporated with YPG-led Syrian Democratic Forces (SDF) could be deployed to Arab-majority towns such as Tal Abyad," the source added.

On Thursday, the Turkish government-aligned Star daily newspaper reported that some of the Arab tribes that have fighters in the SDF have already contacted the Turkish military to join such a deployment.

A day earlier, the SDF said it was ready to provide whatever help is necessary to create the zone, so long as it receives international guarantees that there won't be any foreign intervention.

A senior Syrian opposition source, who spoke on condition of anonymity, said the YPG was very unlikely to accept ENKS or Rojava Peshmerga rule in northern Syria.

While the SDF is still dominant in terms of numbers, the "Rojava Peshmerga, along with Arab groups, might be enough to do the job," the source added

A spokesman for the Rojava Peshmerga, a group that has close ties to the Massoud Barzani-led Kurdistan Democratic Party (KDP) in Iraqi Kurdistan, declined MEE's request for comment.

"All of us have been ordered to stop issuing comments due to the sensitivity of the subject," the spokesman said.

Ankara has had security concerns about YPG fighters in Syria, whom it views as an extension of PKK militants who have waged a decades-long campaign against the Turkish state. The PKK is listed as a terrorist group both in the US and Turkey.

While officials in Washington have warned Erdogan against attacking the Kurds, the Turkish president stressed in a recent op-ed published in the New York Times that his country has no problem with Syria's Kurdish population.

Amid calls for a more inclusive approach to represent the diversity of northern Syria, which includes Sunni and Druze Arabs as well as the bulk of Syria's Kurdish population, some observers have argued that a foreign power may need to step in to smooth the existing tensions in the region.

Abdulbaset Sieda, a Syrian-Kurdish politician and academic based in Sweden, who is also the former head of the Syrian National Council, said though he is critical of the Rojava Peshmerga and ENKS, those groups view themselves as being a part of the future of Syria, contrary to the YPG.

"Barzani is very respected in northern Syria," Sieda said. "He has good relations with every group. His help might be needed to create the zone."

Barzani is very respected in northern Syria. He has good relations with every group. His help might be needed to create the zone

Syria observers also say the establishment of a security zone in northern Syria must take into account Russian considerations.

A source with knowledge of the negotiations between Turkey and Russia told Middle East Eye last week that Russia supports setting up a security zone in the north.

The senior Syrian opposition source, however, said Russia was seeking concessions in opposition-controlled Idlib in exchange for its approval of the zone.

"Al-Qaeda-linked HTS is a radical group, but Russia would work with them to protect the Latakia-Aleppo highway. If you have only one armed group in the area you can stop unwanted clashes and provide complete security of movement," the source said.

But a Turkish security source said HTS has taken advantage of Ankara's focus east of the Euphrates River, asserting that HTS control in Idlib was temporary.

Erdogan also said on Wednesday that Ankara would eventually stabilise the region.