Chronic underfunding, opaque privatisaion and claims of 'mafia-style' corruption have left public health services on the verge of collapse 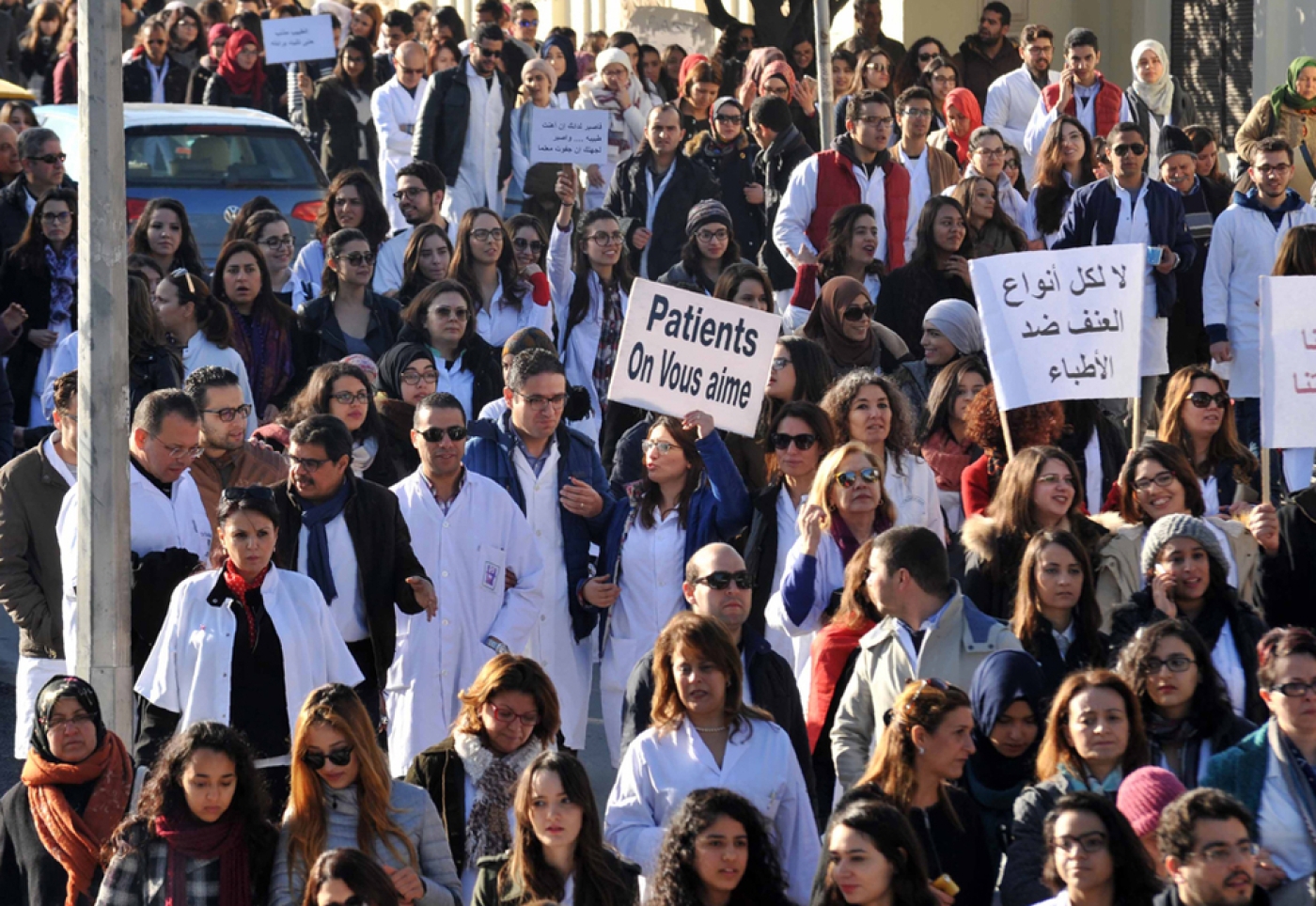 Health professionals protest in February. One holds a sign saying 'patients, we love you' (AFP)
By
Hafawa Rebhi

TUNIS AND KASSERINE - The desks and corridors of Salah Azaiez cancer hospital in Tunis are empty. Most of the paramedics, administrative staff and workers have gone to protest in front of the neighbouring health ministry headquarters. Only a few stay behind for emergencies.

Along with health workers of all the public health institutions of the country, workers at Salah Azaiez on 5 April decided to strike for better working conditions. Othman Jallouli, the secretary-general of the union of public health workers, called for "a true and effective reform of the health sector in order to rescue public hospitals".

Public health professionals dealing with cancer in institutions like Salah Azaiez face an uphill battle to tackle Tunisia's second leading cause of death - cancers kill more than 7,000 people every year. There are only 70 oncologists and 17 carcinological specialists to deal with more than 12,000 new cases a year. Cancer is often referred to as the "bad illness" - as diagnosis in Tunisia often comes too late.

When a bed does become available, many face treks of hundreds of miles from their homes, and the isolation that brings. If you can pay, systems known as complementary and regional private activity (RPA and CPA), offer more. But the vast majority of Tunisians cannot, further distorting the system in favour of those who can.

Habiba Ben Romdhane, the first post-revolution health minister and a practising doctor, said the service was failing patients. RPA offers specialist doctors benefits for working in the regions, while the CPA incentivises teaching hospital staff to practise. The first encourages doctors to use public facilities to turn a profit, and CPA takes away specialists from the classroom, harming the next generation.

Cancer treatment is indicitive of growing healthcare problems in post-revolution Tunisia, where austerity measures and vested interests - many would say outright corruption - have tainted what was a functioning, albeit incomplete, national health service.

Services are basic, diagnosis times are poor, referrals take months, and treatment can take longer still due to a lack of doctors, equipment and drugs.

While health spending is 5.4 percent of GDP, security and defence expenditure has risen from 11.6 percent to 38 percent

Cracks have appeared in what is known as the "three-line" health system, developed in the 1980s but quickly curtailed by an International Monetary Fund-imposed "liberalisation" of government departments in return for $386m of loans at the height of an economic crisis.

The "first line" of 2,058 basic health centres was backed by a second of 33 regional hospitals and 109 district hospitals. A third line of 24 university hospitals and centres offered specialist care and teaching.

The system as envisaged would help patients finding resolutions in the "first line" or referral to more specialist services in the second and third.

But it is the second line, Ben Romdhane says, where problems start for anyone with a serious illness. "Most consultations should be provided in the first and especially in the second line," she told MEE. But they often fail as there are no specialists in the second line and, as a result, patients flow directly to the third.

That funding pressure can be seen in the cancer ward of Farhat Hached university hospital in Sousse. In one room, two strangers share a heavy silence, waiting for family members to arrive.

Many who make it here are often in the later stages of illness - the ward is more a hospice than a hospital. Many who come here decide to return home to spend their last days among family.

Patients here wait five to six months from diagnosis for access to a public-funded radiotherapy machine. Waiting times for eight machines at a private clinic is three weeks, but no one but the wealthiest of Tunisians can afford them.

And the public ward is one of only a few specialist facilities for hundreds of kilometres. Kasserine, a city of 500,000 more than 300km away, has no radiologists or oncologists. Its regional hospital is in a state of disrepair and the sick are often sent to Sousse, suffering the loneliness that distance brings as well as their illness.

Romdhane says the CPA allows medicine professors to practise in private, meaning public health services are undermined and teaching and training is harmed. The poor of Tunisia live on revenues as low as the minimum wage of 338 dinars a month ($146). A private consultation costs 40 or 50 dinars.

In Kasserine, this is double the case: more than half the residents suffer "multi-dimensional poverty" according to an as-yet unpublished government study reported on the local news website, nawaat.org. The national average is less than half the rate of Kasserine.

The Tunisian association for the defence of the right to health, a doctors' pressure group, is opposed to the CPA. In a report published in 2016, the association called for the "progressive abolition" of these practices.

They suggest instead a "performance pay system that would encourage doctors in the public service".

Chronic underfunding and preferrential treatment has led many to believe the system is corrupt.

According to a survey by the influential Tunisian association of public auditors, in 2014, 91 percent of Tunisians believe that public health is affected by corruption. Two thirds of those consider it "very corrupt".

The association listed several grievances: preferential treatment under the CPA and RPA, illicit drugs, false prescriptions, non-compliance with work schedules and a public tender system that inflates and distorts the cost of healthcare.

Abdellatif Mekki, Tunisia's health minister from 2011 to the start of 2014, went so far as to speak of "mafias that control the national economy".

To the victor, the spoils

In a seminar organised on 4 February in Tunis, the former minister blamed the underperformance of the pharmaceutical sector on lobbies serving both domestic and foreign interests.

Tunisia operates a two-tier system of drug procurement. The first, and most widely used, is "contract by agreement", where the government chooses a sole supplier and agrees a price. The second is a bidding process to select the best deal from several offers.

According to Mekki, the contract system has caused distortions in the market and left Tunisians at the mercy of business interests.

Until 2014, one lab supplied Tunisian central pharmacy with insulin as part of a private agreement.

"When we decided to open the market, the laboratory asked us to keep its contract and cut its prices by 25 percent," said Mekki. "The introduction of two new marketing authorisations and the acquisition of insulin through a call for tender yielded a 53 percent reduction in prices."

Mekki says Tunisia is capable of producing its own specialist medicines, but often only produces generics and forces them on the public health system.

"Under pressure from medical delegates, doctors are forced to stuff patients with generic antibiotics, even if it is not necessary," he said.

In its draft development plan 2016-2020, currently under examination by parliament, the government of Prime Minister Youcef Chahed praised the private sector as the main engine of growth.

The government even asked private investors to "ensure the preservation of social peace and promote dialogue and partnership".

But the social climate both in public and private health branches has already deteriorated. Among the 830 protests reported by the Tunisian social observatory in February, 114 were related to the health sector.

The observatory, which is a part of the Tunisian forum for economic and social rights, insists, however, that "dire health problems should not be solely limited to the protests of medical and paramedical practitioners".

Back in Kasserine, poor management has dogged a project to build an emergency service at the regional hospital.

The observatory's audit of a governmental project found that stifling bureaucracy, administrative complacency and inconsistency between the health ministry, the equipment ministry and the regional council had stymied its construction.

"Even if the money has already been allocated, non-monitoring, neglect and laxity hamper the implementation of the project and continue to deprive citizens of Kasserine of their right to health," Amen Allah Missaoui, the coordinator of the citizen audit, project told MEE.

As aging-associated diseases, diabetes, cancers and cardiovascular diseases are spreading, the pressure for more funding for medical care has become acute.

The IMF has recently postponed the disbursement of the second tranche of a $2.9bn loan contracted last May, urging further "liberalisation" reforms similar to those of the 1980s.

Political stability and social cohesion are at stake

Ministers and government official have since promoted "rational spending" and "urgent social security and health reforms".

Juan Pablo Bohoslavsky, the UN's independent expert on the effects of foreign debt on human rights, has warned against the impact such reforms on the most disadvantaged social groups.

In February he urged the government and its international lenders to assess the impact on social and human rights before implementing reforms.

"Tunisia’s international lenders should be encouraged to provide additional debt relief to Tunisia in order to reduce public debt service and free resources for public investment," he said.

"Whether austerity measures and deregulation work while the economy is weakening is a question that needs to be answered in a national participatory process, especially if political stability and social cohesion are at stake." Tunisia Politics
Tunisia: When your home turns into a prison