Operation Protective Edge began early on Monday. Since then at least 49 have been killed and 310 injured, with numbers still rising 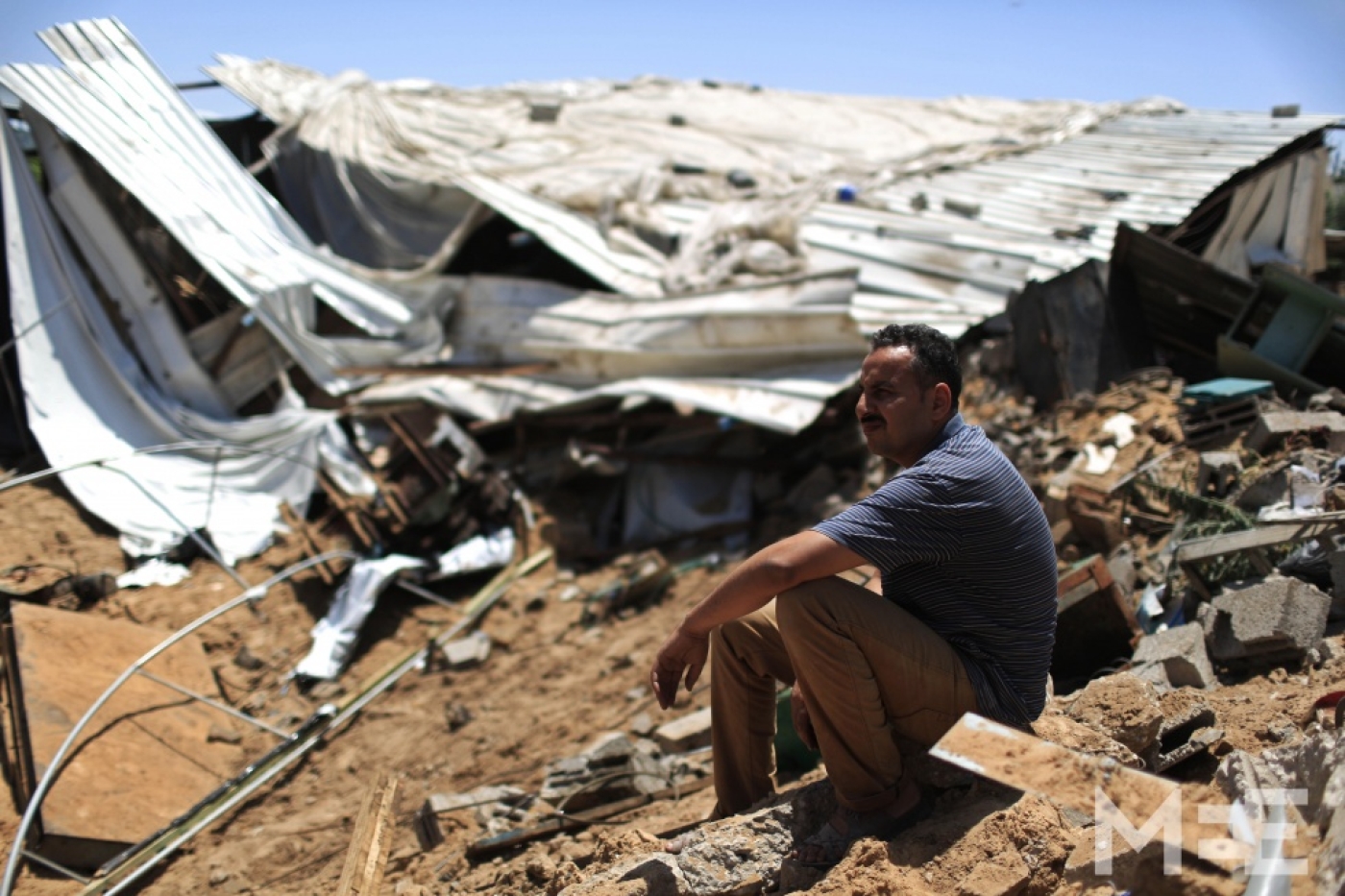 Palestinian man is sitting on the ruins of what remains from his farm in Gaza after Israeli airstrikes overnight (Photo: Mohammed Omer)
By
Mohammed Omer

GAZA CITY - It is still early in the holy month of Ramadan, a time of reflection, of making amends and of fasting, absaining from food and drink during daylight hours. Normally, the residents of Gaza look forward to the muezzin calls for prayer signaling the last prayer before eating can commence. The first taste inevitably that of sweet dates and sips of water. But not this Ramadan, not now.

Windows shake violently, reverberating as F16 missiles crash into the ground, peppering surroundings with shrapnel and earth in a nearby field. Babies scream, dogs bark and pandemonium ensues. The streets are empty of traffic. Anything that moves becomes a target. Above Israeli F-16’s screech through the air accompanied by the banal hum of drones hovering above. Nowhere is safe and there is no way to get out.

Operation Protective Edge, as Israel has called it, began early on Monday with Israeli fighters delivering the first blow in the form of airstrikes on 10 sites within the Gaza Strip. Tensions remained high following weekend clashes between Israeli police and demonstrators in Jerusalem, East Jerusalem and Arab towns throughout northern Israel. Gaza’s International Airport, built 14 years ago with funds from donor groups has been targeted six times as of this writing.

In Gaza, Israeli bombs were answered with crude homemade rockets propelled into Israel by the resistance in a seemingly endless war of one-upsmanship.

Caught in the crossfire are the civilians of Gaza and southern Israel.

Drones, missiles, tanks, helicopters, ground troops, and night raids are near weekly events in the Gaza Strip. Calls for retaliation within and outside of Gaza are mounting. The coming days are likely to witness more violence.

The number of people killed is in steady increase – now there have been 49 killed, 310 injured, and 64 houses have been demolished. Interior ministry spokesperson Iyad Al Bizm says 192 of those injured are children and women. The numbers are changing every minute.  The Interior ministry says 510 airstrikes were carried out on Gaza in the past two days but this is constantly rising and airstrikes are heard every few minutes across the Gaza Strip.

Economically, Gaza is already suffering. With up to 50,000 employees of the former Hamas de facto authority without pay for months, living conditions have deteriorated. Even basics, like food and water are unaffordable without a paycheck. The lack of money for government employees affects the rest of the economy, stores, farmers, suppliers, service providers, and anyone who relies on the income of others for their own income. Officials estimate more than 250,000 are being affected. Likewise, the shutting down of banks has meant tens of thousands of PA employees are unable to get their monthly wage. With renewed air strikes and the potential for a ground invasion looming, those who still have money are stocking whatever they can find in the markets. Everything from dried milk to lentils and macaroni is being bought up in a hurry but even these simple staples are luxuries for many.

Hamas leader Ismail al-Ashqar also relates an aversion to a cessation of hostilities: “Resistance will not give truce, and will not stop till occupation pledge to: stop aggression, lift the siege on Gaza, and release all prisoners released in prisoner exchange deal,” he says.

Ashqar insists the resistance is “able to hit beyond Tel Aviv.”

At Gaza’s Shifa hospital there lies a Palestinian child named Kenan Hamad that was the victim of a shrapnel injury. When asked what had happened to him, he said: “my cousin brought me to this hospital when a bomb hit the house.”

When asked where his mom and dad were, he replied, “they are home.” He is still living with the impression that his mom and dad are still there, but in fact his family were buried today.

The Israeli Military has suggested a ground operation may be imminent and troops as well as weapons have been seen assembling on the border of the Strip. On Wednesday morning, Israel’s navy joined the battle and began shelling Gaza from the sea.

The Ministry of Health in Gaza announced that Gaza hospital has a shortage of medicines and 25 percent of medical supplies are currently not in stock. Dr. Ashraf al-Qidwa a spokesman for the health ministry, urged the international community to respond to the needs of Gaza.

The ministry called on Egypt to open Rafah Crossing in order to allow urgent medical cases access to outside hospitals. Rafah Crossing has been largely closed over the past months. Gaza Under Attack
Hamas sets 4 conditions for truce with Israel