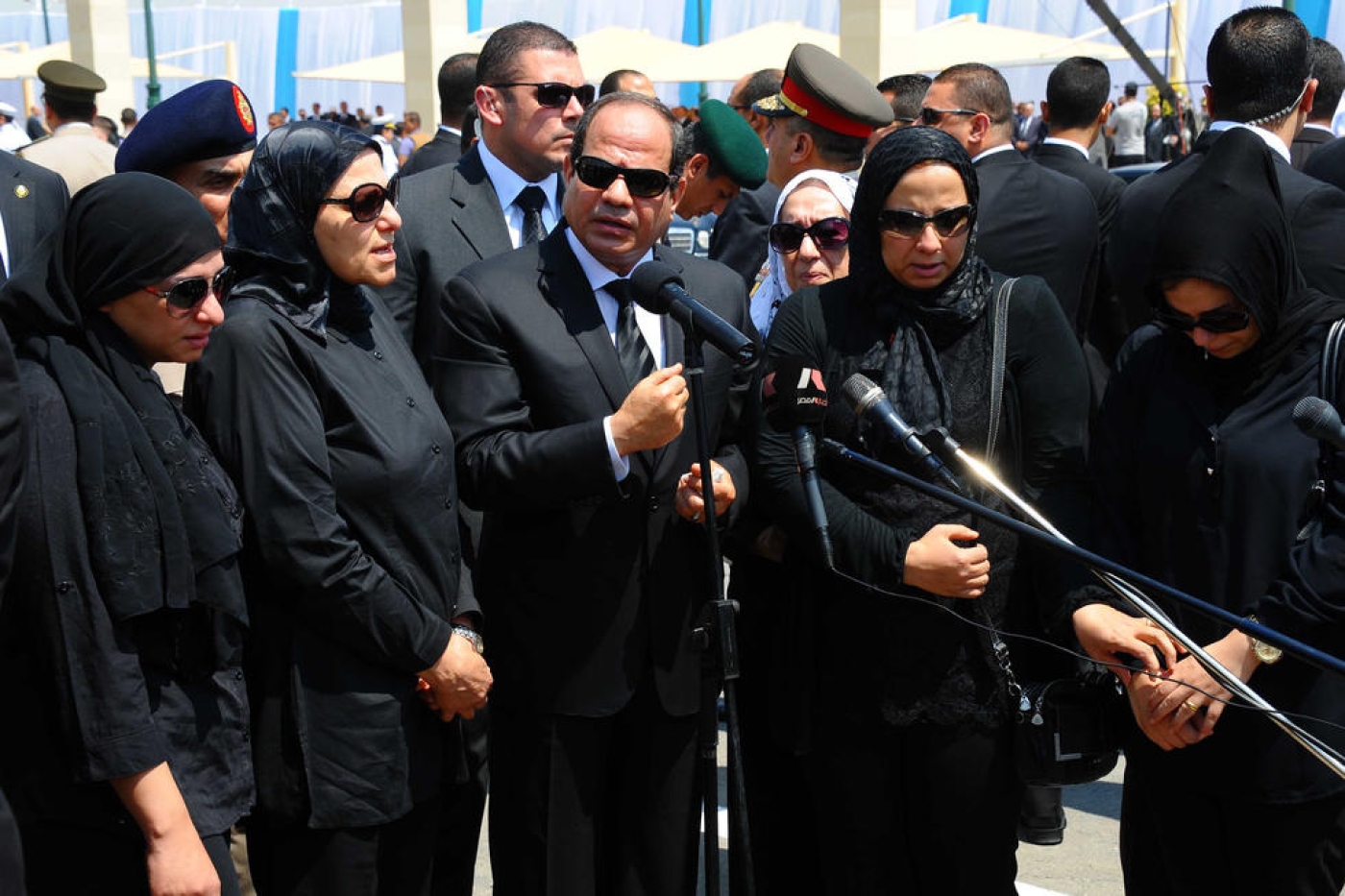 Egyptian President Abdel Fatah al-Sisi has pledged to toughen up laws against militants following the killed of Egypt’s top prosecutor Hisham Barakat in a car bomb on Monday.

Visibly gesticulating with rage, Sisi railed in a televised speech against the inability of the state to effectively deal with the militant in insurgency in Egypt.

"The arm of justice is chained by the law. We're not going to wait for this. We're going to amend the law to allow us to implement justice as soon as possible," Sisi said, surrounded by Barakat's mourning relatives.

"Do courts in these circumstances work? Do these laws work? They work with normal people.”

He pledged swift action against the perpetrators of the killing, the most high profile assassination of an Egyptian political figure in many years.

Sisi also announced that he was renaming Rabaa Square, the site where at least 800 people were killed in August 2013 after the army seized power, to Hisham Barakat Square.

Prosecutor General Barakat died of injuries inflicted in the attack, state-run media reported on Monday afternoon, while nine other people, including six of his bodyguards, were injured.

Security sources said that the bomb was detonated by remote control. No group has claimed responsibility for the attack.

The bombing came after the Islamic State group's affiliate in Egypt called for attacks on the judiciary, following the hanging of six alleged militants.

A statement from Egypt's armed services on Monday afternoon expressed condolences for Barakat, who it said was "martyred on the way to carry out his national duty".

The bomb destroyed several cars and blew out storefront windows in the upscale district of Heliopolis. At least five vehicles were completely gutted in the explosion, AFP reported.

"This is a major attack," Issandr al-Amrani of the International Crisis Group told Middle East Eye, describing Barakat as "the most senior official" to be assassinated since the 1990s.

"In the last few years there has generally been an increase in low-level attacks, but we haven't seen such a major attack in around 18 months."

Security around public figures was stepped up markedly in September 2013 after militants attempted to blow up the Interior Minister, Mohammed Ibrahim.

Monday's bombing, though, is "a serious escalation by radical groups against the Egyptian state. This was a major attack against someone under protection..."

The European Union issued a statement of condolence, calling the car bombs a “terrorist attack.”

“We express our condolences to the family of Egypt’s Prosecutor-General Hisham Barakat, who died following a heart attack in Cairo this morning,” the statement read. “The EU reaffirms its commitment to support Egypt in its fight against terrorism.”

In a press release, Amnesty International condemned Barakat’s murder as a cowardly act.

“If the rule of law is to prevail in Egypt, judges and prosecutors must be free to do their jobs without the threat of violence. However, the Egyptian authorities must not use such threats as a pretext for trampling upon human rights.”

Opposition group the Egyptian Revolutionary Council also condemned the killing in a statement on Tuesday, but levelled the blame at the Egyptian state for collapsing security in the country.

“The ERC believes that the repressive policies pursued by the Sisi regime, with murder imprisonment and rape, frequently used as methods of political control, has inevitably destabilised society and led the country towards increased violence”, it read.

Experts warn that the sophistication and timing of the attack could mean that Egypt is set to witness an uptick in violent attacks.

Ahmed Mansour, the Al-Jazeera presenter briefly detained in Germany at Egypt's request, posited the theory that the attack was carried out by the Egyptian state as a means of justifying a security clampdown.

"After reading eyewitness accounts from residents living on the same street as the prosecutor, I do not rule out that the Sisi regime got rid of them, for several reasons," he wrote on his Facebook page.

"The most important one is that he is just a corrupt prosecutor, and the regime has hundreds of his kind. The regime finds the justification to suppress and prevent demonstrations that it fears on June 30 and July 3, and seeks the sympathy of the people before it can inflict more injustice and tyranny on them. This is the language of tyrants: they sell their supporters cheaply and dispose of them once their roles are done. In short, the general prosecutor’s role ended and it is time for the next person to take his role."

Barakat had worked in the state prosecutor’s office since 1973, climbing slowly through the ranks to the top job four decades later.

Barakat, 64, was married with three children, two of whom now work in the judiciary.

He was named general prosecutor on 10 June 2013, just weeks before the overthrow of Egypt’s first elected president, the Muslim Brotherhood’s Mohammed Morsi.

During Barakat’s time in office, thousands of opposition activists were jailed, with mass death sentences handed down after speedy proceedings slammed as “charade trials” by Amnesty International.

The most recent of these saw Morsi, who has remained in prison since his overthrow on 30 June 2013, sentenced to death earlier this month for plotting prison breaks during the 2011 uprising against President Hosni Mubarak.

“The choice to target the public prosecutor so soon after rulings including the death penalty against Morsi can’t be a coincidence,” said Amrani.

“Egypt has been bracing for some kind of attack of this sort to mark the anniversary.

"There’s a lot of fear that tomorrow, on the anniversary of the protests [that led up to Morsi's ousting], there will be a series of assassinations and attacks."

In a statement on its English-language website the Muslim Brotherhood condemned Barakat's assasination while accusing him of facilitating torture, killing and detention without trial.

"The violence and killing which the coup regime's public prosecutor legalised by facilitating executions, arbitrary arrests, detention, torture and slow death in prisons... created a whole sector of society, with tens of thousands of oppressed people," read the statement. Emad Shahin, an Egyptian professor sentenced to death in absentia in the same trial as Morsi, told MEE that the country’s judiciary are likely to be targets in any new wave of major attacks.

“The judiciary has been part of the bloody confrontation between the regime and its opponents,” he said by phone from Washington.

“There has been a travesty of justice and a neglect of due process,” he said, pointing to a series of leaks that claimed to expose collusion between the judiciary and officials close to then-army chief, now President Abdel Fattah al-Sisi.

One of the leaked recordings, broadcast by opposition news channels and recently verified by UK audio forensics experts, alleged that Barakat had colluded with officials to fabricate details about Morsi’s detention following his military ousting.

Barakat denied the leaks were authentic, alleging that they had been engineered by the Muslim Brotherhood.

According to Shahin, the judiciary’s role in the state’s crackdown on dissent means some view judges, courts and prosecutors as key targets for radical elements of the opposition.

“This kind of state violence makes it extremely difficult to avoid counter-violence.”

Militants on Monday published a video claiming to show an operation codenamed “Purifying the Judiciary,” featuring slow-motion footage of a machine-gun attack targeting Egyptian judges on a busy road.

Gunmen from Ansar Beit al-Maqdis, which recently pledged allegiance to Islamic State (IS) and changed its name to Sinai Province, opened fire on a car in the restive Sinai Peninsula in May, killing two judges, a prosecutor and their driver.

In March the Supreme Court in Cairo, where Barakat had his offices, was targeted by a bomb blast.

In the wake of that attack, which left two people dead, Barakat promised to speed up the implementation of a new “Terrorist Entities” bill announced in February.

The bill was greeted with alarm by human rights groups, who warned that the law allows political parties to be defined as terrorist organisations “with ease”.

In the absence of a functioning parliament the current government, led by Sisi, has secured much of its legitimacy by pledging to crack down on militancy.

In the midst of rising violence, though, some have questioned whether the success of such a large attack will reflect badly on his efforts so far to stamp out violence, especially an ongoing insurgency in the Sinai.

Many reporting that Hesham Barakat, public prosecutor has died as a result of the targeted attack. So much for #Sisi's promise of stability.

“So far he has failed miserably to achieve this. He hasn’t been able to restore security, and nor has he offered any way to ease the situation.”

Despite this, analysts doubt that this latest bold attack will force a rethink from authorities in Cairo.

“This will not embarrass [President Sisi],” says Amrani.

“On the contrary, the reaction from the public and the international community will help Sisi. He says he’s fighting a war on terror, and this is a terrorist attack. It will make it harder to put pressure on the regime to stop using such harsh repression as part of its security efforts.”

Activists in Egypt and those in exile say that, in the wake of Barakat’s murder, they fear an escalation in the government’s attempts to put down opposition, whether it be violent or peaceful.

“This is exactly what the regime wants - they will use it as an excuse to tighten their grip,” warns Shahin.

“It will lead Egypt into a vicious cycle of endless violence."