Explosions hit offices of the pro-Kurdish People's Democracy Party (HDP) in Turkey on Monday, injuring six people, in the latest in a wave of attacks against the party.

Two local headquarters in the provinces of Mardin and Ardana were hit by explosions, according to the Dogan News Agency, leaving four injured.

The attacks come just three weeks before a general election in which the HDP aims to take enough seats to block ruling party the AKP from changing the constitution.

Rahmi Bastug, Mersin's police chief, was quoted by Anadolu Agency as saying the explosion occurred in the kitchen of the HDP office.

The explosions are just the latest in a spate of up to 56 attacks against HDP offices in the Turkey over the last month.

Attacks have included attempts to target 16 election bureaus. In the upcoming election, HDP aims to become a leading opposition party based on its Kurdish support base, while also reaching out to non-Kurdish left-wing voters.

Last week, a group of around 50 people attempted to storm an HDP bureau in Bartin in northern Turkey leading to the injury of a police officer.

On Saturday, another HDP election office in the Saray district of Tekirdağ province was surrounded and pelted with rocks by anti-Kurdish demonstrators.

According to the Firat News Agency (ANF), a pro-Kurdish news agency, a district administrator from the ruling Justice and Development party (AKP) was involved in the demonstrations.

HDP co-chairman Selahattin Demirtas was set to hold a rally in Mersin today – it is unknown as of yet whether this will still go ahead.

In April, unidentified assailants opened fire on the HDP headquarters in the capital Ankara, though no casualties were reported.

Though often labelled a Kurdish party, the HDP has frequently argued that it can function as a party for all Turks and has pushed a left-wing programme focusing on workers' rights, direct democracy and the rights of women and LGBT people, for whom it has a respective 50 percent and 10 percent quota for parliamentary candidates.

However, the party has been criticised for its alleged links to the illegal Kurdistan Workers Party (PKK) which has been responsible for thousands of deaths in Turkey.

Turkish far-right organisations, such as the ultra-nationalist paramilitary Grey Wolves, have frequently been blamed for attacks on HDP supporters and offices.

The PKK link has also brought the party's supporters into conflict with conservative currents in the Kurdish movement, as well as supporters of the Islamic State (IS).

Clashes between liberal-leftist Kurds, security forces and the pro-IS Kurdish movement Huda Par (and their Turkish Hezbollah military wing) on the streets of Turkey have been responsible for scores of deaths over the past year.

Members of the Koma Civakên Kurdistan (KCK), a transnational body set up by the PKK to organise political activity across the Kurdistan regions, urged their Turkish supporters on Saturday to vote for the HDP in the upcoming elections on 7 June.

"As the AKP Government and Erdoğan are in a panic they are attacking the HDP," said KCK health committee member Necip Özalp, according to ANF. "Our people must analyse these policies and support the HDP. They must not permit irregularities on the day of the election.

"This year’s election is a matter of humanity.”

Success for HDP could dent threaten attempts by the AKP to reach a majority in the 550-seater parliament if the HDP can pass the 10 percent quota needed to enter the chamber.

Both the HDP and the AKP draw support from Turkey's Kurdish minority - who make up over a 20 percent of the country - due to the recent introduction of limited linguistic and cultural protections after decades of suppression. 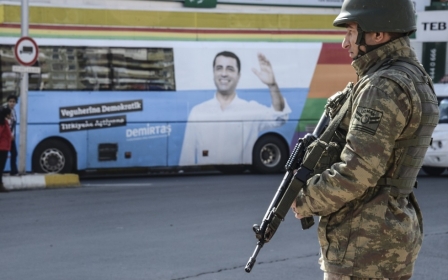