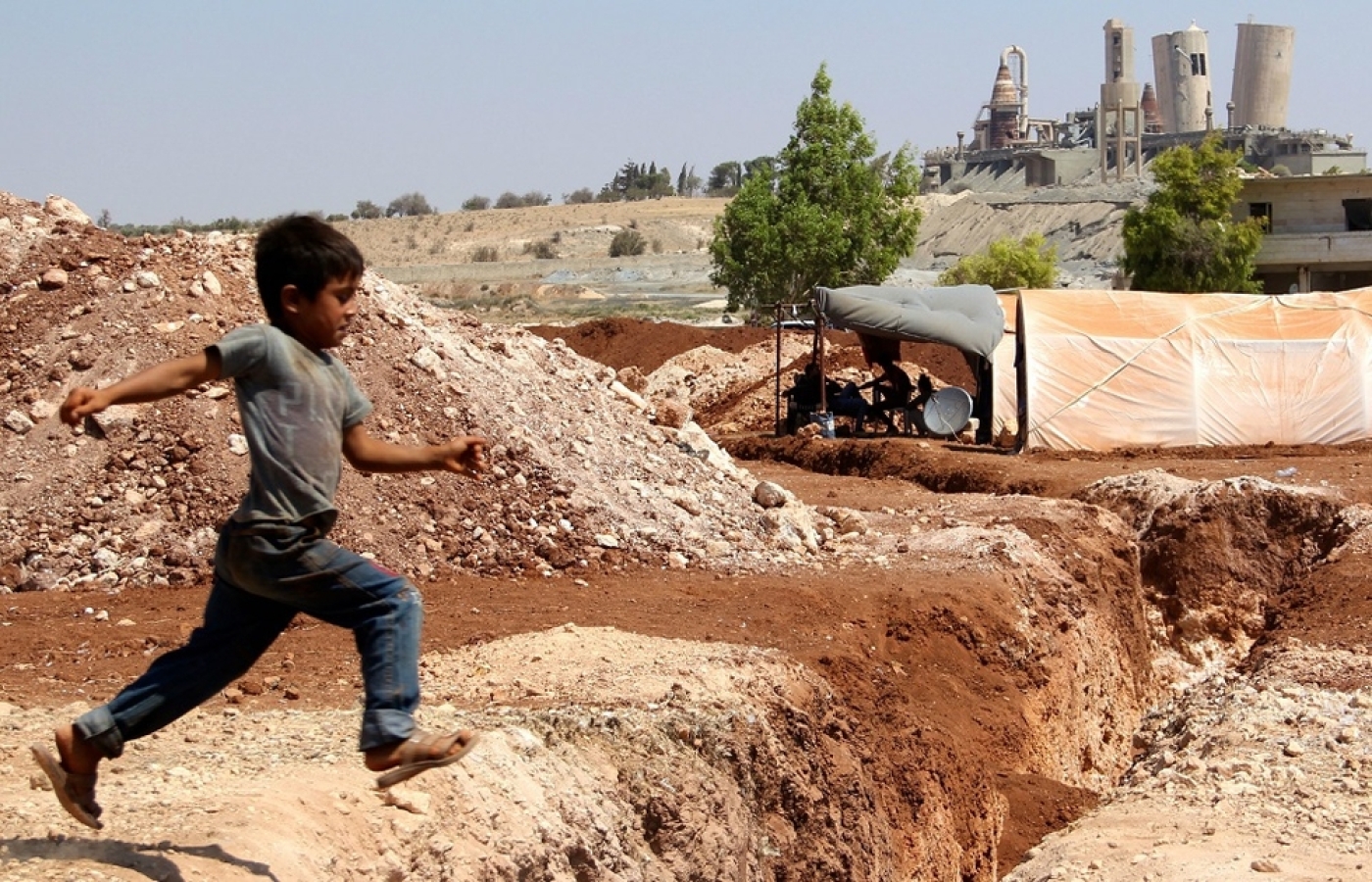 FAFIN, Syria - Despite living as displaced people in Shahba, a Kurdish-controlled enclave in northern Syria’s Aleppo province, the 25 members of the Barekat family feel fortunate.

All of them were able to escape from their homes in Faqira, a Yazidi village in the Afrin region, when the fight between the Kurdish People's Protection Units (YPG) and the Turkish military and allied Free Syrian Army fighters erupted early this year. After a difficult journey, they finally found refuge in an internally displaced persons (IDP) camp in Fafin village.

"I remember 13 March as the worst day of my life. Making the escape route on foot was very hard. It was a long way so we could only carry a bottle of water. Some elderly people lost their lives on the road because of fatigue and shelling," Michael Barekat, told Middle East Eye.

Barekat, 47, and his relatives are among nearly 6,000 displaced Yazidis living among the 137,000 displaced civilians in Shahba, according to United Nations figures and local officials, after local Kurdish authorities and the Syrian government reached an agreement in March to host IDPs from Afrin there.

"After expelling Daesh [the Islamic State group] in 2016, we managed the north of the region and Damascus controlled the south. The regime had declared it a military zone and it was nearly uninhabited," said Hevi Mustafa, co-chair of the Afrin canton administration.

"Although there was an understanding to relocate the IDPs, the relationship with the Syrian government is not easy in other fields," said the Kurdish official.

Sileman Cafer, a Yazidi community leader in Afrin and author of the book Qewlen Ezdiyan (The Yazidi Texts), told MEE that the size of this religious minority had been in decline since long before the start of Syria's civil war in 2011.

"At the beginning of the 20th century there were 58 Yazidi villages in the Afrin region out of a total of 358. Due to the pressure exerted by the Muslim majority, some Yazidis converted to Islam. The villages were reduced to 22 with a total population of 60,000 Yazidis before the breakout of the Syrian war in 2011," said Cafer, who is also the president of the foreign affairs commission for Afrin canton.

The will of God was to create us Yazidis and Kurds. So, what authority do they think they have to force us to convert to Islam?

"Since 2013 the neighbouring Sunni villages of Afrin have been controlled by radical groups. Due to some threats a large part of the 60,000 Yazidis began to abandon the region [to go] towards Europe or countries such as Australia."

Most of Afrin's Yazidi villages are in the southern part of the region and extend from Azaz to Mount Simeon. These communities have functioned as a de facto border between the mainly Kurdish enclave, towns such as Deir Semaan where the population is predominantly Sunni Arab, and towns such as Nubl and Zahra, where the population is mostly Shia Arab.

"Before the Turkish-led assault on Afrin the Yazidi population had been reduced to 20,000 people. As a result of the attack many have emigrated abroad or towards cities such as Aleppo or Damascus. Nowadays, in Shahba only 6,000 of us remain," said Cafer.

In the Shahba region there are three large camps with tents that lodge around 16,000 people, although the bulk of those living as IDPs have occupied empty houses.

International organisations including Unicef are responsible for running some services such as the water supply, while the Kurdish administration is in charge of managing rubbish collection and medical centres, and also provides free bread and four hours of electricity per day.

"When we saw videos of the Islamists threatening to kill us if we did not convert to Islam, some Yazidi women decided to fill small items with poison to drink if necessary in order not fall into the hands of the enemy. Unfortunately, some had to do it," Michael Barekat said from inside his tent in the "Resistance Camp" in Fafin.

Barekat was referring to videos widely shared online by Kurdish activists and by the Syrian Observatory for Human Rights, a UK-based pro-Syrian opposition monitor, which appeared to show Turkish-backed Syrian rebels questioning men in Afrin about how many times a day they prayed and threatening to kill those who did not convert to Islam. The Yazidis follow their own monotheistic religion.

In the family book, the Syrian state always registered us as Sunni Muslims. We are Yazidis, we do not want to be Muslims

Yazidis have faced persecution for centuries because of their religious beliefs, which draw on elements of religions including Islam, Christianity, Hinduism and Zoroastrianism and have led them to be denounced by some as "devil worshippers" and heretics.

Even before the war, the Syrian government had refused to recognise the community's religious identity, Barekat said.

"In the family book, the Syrian state always registered us as Sunni Muslims. We are Yazidis, we do not want to be Muslims," he said.

In August 2014, the Yazidi community was the target of an attempted genocide by the Islamic State group as it gained territory in Syria and Iraq.

More than 3,000 people were killed and more than 6,000  abducted, with many Yazidi women held captive as sex slaves. Tens of thousands of Yazidis fled their homes and found refuge on top of Sinjar Mountain in northern Iraq.

"It seemed that the Yazidi massacre in Sinjar was a red line. But after what happened in Afrin, there is no doubt that the international community has given a green light to reactionary Islamist forces to attack the Yazidis anywhere," 24-year-old Ibrahim Barekat told MEE.

"Daesh kidnapped our women and sold them in the street market as sexual slaves. We were afraid that it would happen again, so we decided to escape," said Ibrahim's uncle, Abdo Barekat.

"The will of God was to create us Yazidis and Kurds. So, what authority do they think they have to force us to convert to Islam?"

In Afrin city, Sileman Cafer said, Turkish-backed forces had destroyed the centre of the Yazidi community including an historical archive.

"Luckily, we were able to save some important documents and relics," said Cafer, who was born in Basofan village. 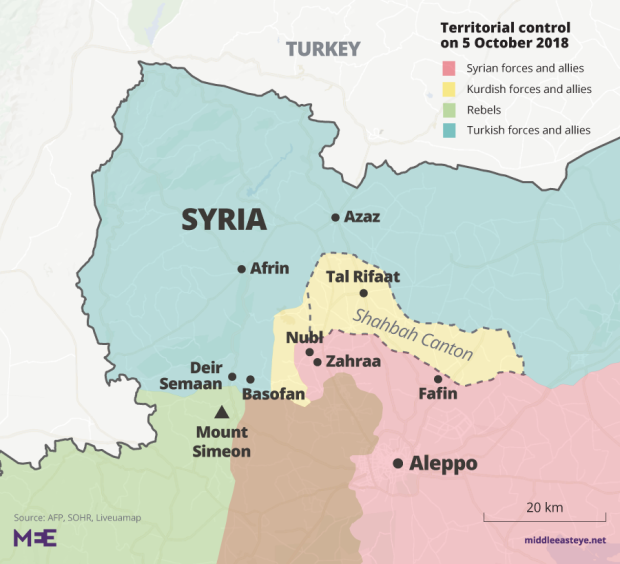 Michael Danti, the academic director of cultural heritage initiatives at ASOR, said that a major challenge in documenting the destruction of Yazidi shrines was that the whereabouts of many of them was unknown.

"We know there is a high likelihood during conflict in Syria and Iraq for minority cultural heritage sites to be vandalised or destroyed. This is especially true for Yazidi holy places in particular, and heritage associated with Kurdish ethnicity in general (Sufi sites are also frequently targeted)," Danti told MEE in an email.

Cafer told MEE that temples and holy sites in Yazidi villages had been destroyed, and he blamed Turkey for allowing rebel groups to act freely.

"In my hometown, Basofan, they have opened a mosque when there has never been a single Muslim in it. They forced women to wear black clothes and forbade them from wearing trousers," he said.

In my hometown, Basofan, they have opened a mosque when there has never been a single Muslim in it. They forced women to wear black clothes and forbade them from wearing trousers

"They have also opened Quranic schools and force all children to go," he said. "Last week they arrested some parents who refused to send their children to an Islamic school."

Cafer said that the few Yazidis who remained in Afrin had stayed because they were older people or couldn't afford to leave.

"During the first days of the exile in Nubl, house owners asked for 150,000 Syrian pounds [nearly $300] for renting a house for a month and some decided to go back."

With a Shiva lingam stone hanging around his neck, a religious symbol brought back by a relative from the Yazidi sanctuary of Lalish in Iraq's Kurdish region, Michael Barekat is aware that the return of his family to Afrin is complicated.

"As long as the Islamists are in Afrin, we cannot return, unless the big powers force Turkey and its allied groups out of the region," said Barekat, speaking under the watchful eye of his nephew Hesen, a YPG fighter injured by a Turkish air strike and who has the word "Love" tattooed on the knuckles of both hands.

"In our village, they forced a 50-year-old Yazidi man to kiss a Quran and say he was Muslim. But he refused because he could not betray his God and they killed him."

Barekat did not identify which group carried out the alleged killing, and MEE cannot independently verify his account of the incident.

Both Amnesty International and Human Rights Watch have raised concerns about violations committed by Turkish forces and Turkish-backed fighters in Afrin since the assault on the region in March.

Neither Amnesty nor Human Rights Watch mentioned alleged atrocities committed specifically against the Yazidi minority, and neither organisation had responded to requests for comment on the allegations raised in this article at the time of publication.

The crimes against Yazidis and civilians are not true ... We treat everybody in the same way because we are all Syrians

A local Free Syrian Army spokesperson told MEE that he did not consider reports of atrocities committed against Yazidis credible.

"We handed over the region to the local council in Afrin, which consists of the people of the area itself. We don't consider this information reliable because it doesn't come from impartial sources," said Mohammed al-Abed, head of the political bureau of the Al-Hamza Brigade Special Forces, a Turkish-backed Free Syrian Army group operating in Afrin.

"The crimes against Yazidis and civilians are not true and undocumented. We treat everybody in the same way because we are all Syrians," Abed told MEE.

But for Cafer, the current situation in Afrin is so fragile that the survival of the Yazidi religion and people is at stake.

"The Yazidi religion is the cornerstone of the Kurdish identity, its culture and its language. If a single Yazidi survives there will be Kurds on the face of the earth. But there is a real danger that our people could be exterminated," he said.

"We are very grateful to the European states that have hosted a large number of Yazidi refugees, but that is not the solution. In this way we are leaving our land, our history. We must continue here, and therefore they must protect us here."

Others take solace from the turning tide of the Syrian war that has seen pro-government forces gradually reclaim territory from rebel groups and militants across the country.

Isdihar Sabri, 40, told MEE that three of her cousins had been killed by aerial bombardments during the Turkish-led attack on Afrin.

"We've tried to stay close to our land," Sabri said. "Now we are hoping for a Syrian government victory so we can return to our hometown." 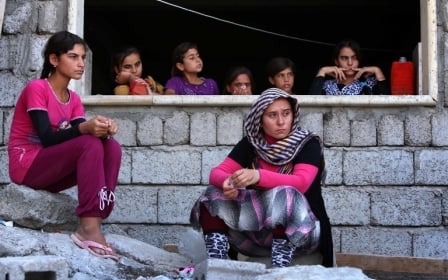