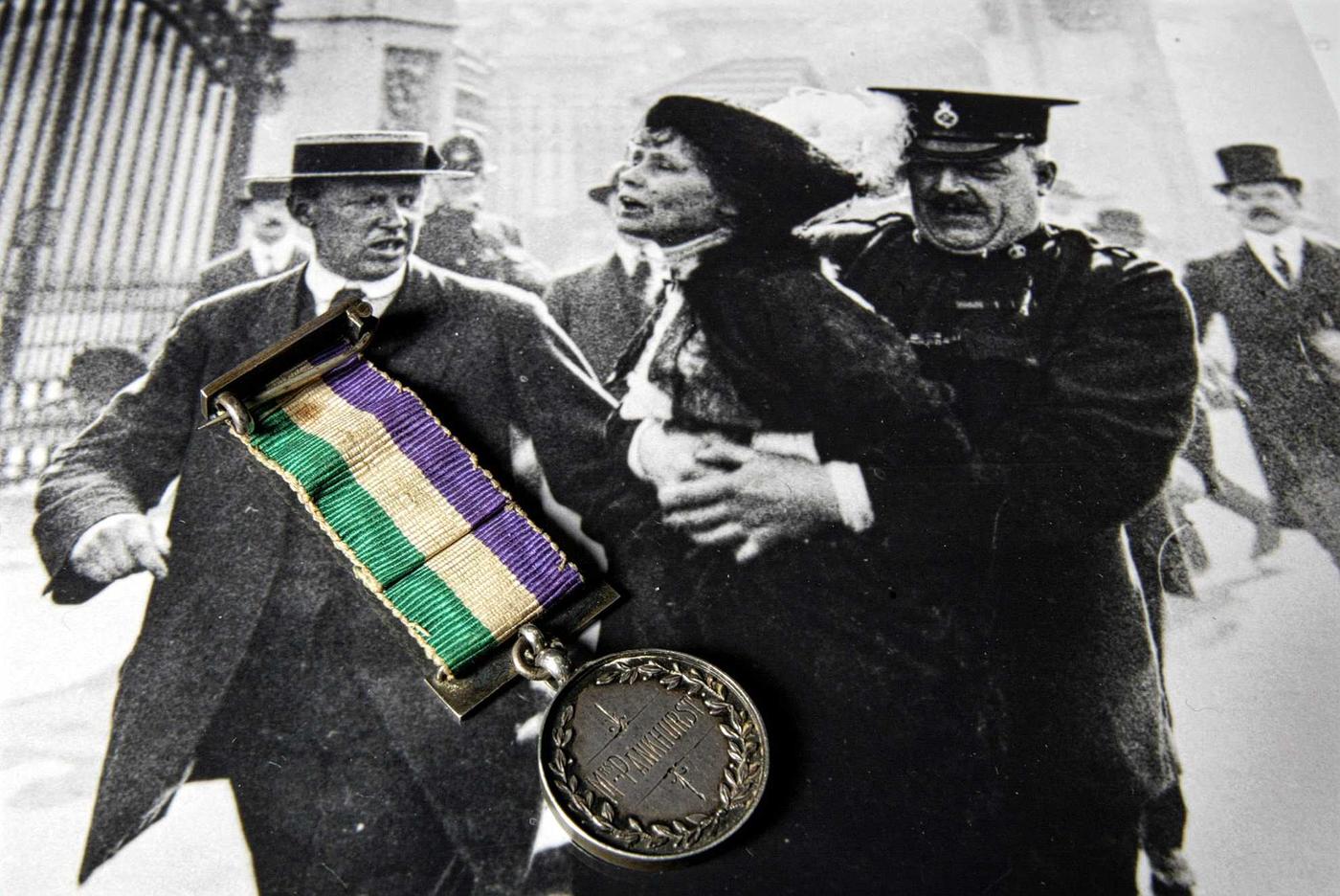 The imprisonment medal given to leading suffragette Emmeline Pankhurst, shown being arrested in London in February 1913 (Reuters)
By
Simon Hooper

School children in the UK are being taught that the suffragettes were extremists - even as leaders of the movement which helped win women the vote a century ago are being lauded by senior British politicians.

A suggested lesson plan for teachers in Leicester produced in collaboration with the local Prevent counter-extremism team lists the suffragettes alongside the Nazis, al-Qaeda, the IRA, animal rights activists, and Anders Breivik - the Norwegian far-right-inspired mass killer - as examples of extremism.

Those behind the material argue that it is intended to promote debate and critical thinking around the issue of extremism and does not imply that the suffragette struggle and Nazism are comparable in any way.

Rabiha Hannan, project coordinator for the Respect Programme which produced the lesson plan, told Middle East Eye that the presentation looked at how violence had been "used in the past for a number of different causes, including positive ones".

But critics told MEE that they were outraged by the inclusion of the suffragettes and said the lesson plan was ill-judged and offensive.

Prime Minister Theresa May and Home Secretary Amber Rudd, the minister responsible for the Prevent strategy, were among those to pay tribute to the suffragettes on Tuesday as part of government-backed events commemorating the 100th anniversary of the parliamentary act that granted the vote to some women for the first time.

Many female MPs donned “Votes for Women” sashes or wore rosettes in the green, white and purple colours of the suffragette movement.

In speeches on Tuesday, May said that the right to vote had not been handed over willingly but had been “forced, over many years of struggle”, and paid tribute to the “courage and vision” of suffragette leader Emmeline Pankhurst. The prime minister also wore a suffragette ribbon during Prime Minister's Question Time on Wednesday.

“I heard about the campaign for women’s votes from my godmother, whose parents were active in the cause and knew the Pankhursts,” said May in a speech announcing that the government would fund the erection of a statue of Pankhurst in Manchester.

"We don’t hear enough about these Edwardian radicals," she said later in the day in London.

Rudd, who also holds the post of minister for women and equalities, said that the government would consider granting posthumous pardons to women jailed during the struggle for suffrage.

“One hundred years ago, an army of brave women made enormous sacrifices to pave the way for the equal rights we enjoy in this country today,” she said.

But the teaching material, entitled "Extremism isn't new" and targeted at school children aged between 11 and 14, casts the suffragettes in a rather different light.

“Between 1900-1910, the suffragette movement became more violent; churches were burnt down, politicians were attacked, homes were firebombed and in June 1913 Emily Davison threw herself under the King’s horse and died, in order to attract attention to the campaign to secure votes for women,” says the first slide in the PowerPoint presentation.

The Respect Programme, which produced the material, describes itself as an “online resource providing ready-made lesson plans on issues such as citizenship, prejudices, extremism, staying safe online, Britishness and more!”

The programme is based within Leicester City Council and linked to the city’s Prevent team, which says on its website that it supported the production of the lesson plans.

Notes accompanying the presentation explain that its purpose is to help students to “understand what extremism means and give examples of different types” and “to understand that extremism promotes intolerance and disrespect of others, may breach human rights and can lead to violence”.

Other objectives include helping students to understand “how people can become influenced by extremism through concern for good causes as well as bad”, and “to identify common traits amongst extremists”.

Suggested questions for group discussions include: “Is there a difference between being passionate or determined about wanting to change something and being extreme? Is the ‘cause’ an extremist is backing always bad? Sometimes bad? Never bad?”

Hannan, who authored the presentation, told MEE: "Of course we’re not saying that the Nazis or animal rights extremists are the same as the suffragettes, but what the powerpoint does is look at how violence has been used in the past for a number of different causes, including positive ones. We are trying to help young people explore these issues more carefully and work out better ways of attaining rights than the use of violence."

William Baldet, a Prevent coordinator in Leicester who was involved in producing the material, told MEE the lesson plan was intended to promote debate and critical thinking.

“It is ridiculous to suggest that this implies the suffragette struggle is comparable to Nazism. This forms part of a wider series of lesson plans that promote debate on extremism, terrorism and radicalisation. Critical thinking is seen as a vital tool for young people in enabling this," said Baldet.

"The suffragettes are used as an example of a group which held radical views and challenged authority. The idea is to explore the concept of ‘extremism’ through history and highlight how the use of violence hinders any cause, no matter how noble.

"We should have faith in our teachers to be able to hold controversial and provocative conversations with young people on these pressing contemporary topics, and not undermine their efforts by misrepresenting them.”

But Caroline Lucas, a member of parliament and co-leader of the Green Party, who was labelled an "extremist" by police during training sessions for teachers because of her participation in anti-fracking demonstrations, told MEE that the tone of the lesson plan was ill-judged.

"Labelling the suffragettes as extremists alongside the Nazis in this lesson plan seems to me to be ill-judged. The Prevent programme has been widely criticised in the past, and teaching materials like this could further undermine the much-needed work in halting radicalisation in the UK," said Lucas.

"This revelation also follows the use of my arrest on a fracking demonstration as an example of extremism. These mistakes shouldn't be made - and I urge Prevent to urgently review the materials they are using."

A spokesperson for the Women's Equality Party told MEE that the lesson plan was "offensive and absurd".

“It is ridiculous to list the tactics of suffragettes next to Nazism and 9/11 as an example of ‘extremism’," the spokesperson said.

“The history of the women’s rights movement is one of disobedience, protest and resistance. In some instances, the struggle turned violent – though the damage was almost always against property, rather than individuals – as conventional methods of protest were ignored.

“Inviting comparisons between acts of terror or the systematic extermination of millions of people and women fighting for their basic human rights is offensive and absurd.”

The suffragettes emerged out of the wider women’s movement at the start of the 20th century amid frustration at the lack of progress achieved by suffragist campaigners who sought to win the vote for women by lobbying MPs to support their cause.

Committed to “deeds not words”, the suffragettes embarked on a campaign of direct action that included arson attacks on properties, bombings and violent protests. Many were subsequently imprisoned and used hunger strikes to draw attention to their cause.

Writing for the Sky News website, Simon Webb, author of The Suffragette Bombers, said the suffragettes had been a “terrorist organisation”.

“The terrorist bombings carried out by the suffragettes have today been almost wholly forgotten; replaced with a sanitised view of the activists as people who would do nothing more dangerous than break the occasional shop window,” wrote Webb.

Their methods were unusual and they were very unladylike for the day but what they were asking for was not radical, it is a basic human right

But Diane Atkinson, author of Rise Up, Women!: The Remarkable Lives of the Suffragettes, said that the suffragettes' adoption of direct action had been one of the critical factors in winning women the vote.

"I am extremely unhappy by the inclusion of the suffragettes in this. They were asking for a human right which is the vote and they didn't kill anybody. Violence was done against them and to them so it is absolutely outrageous that they are being used as an example of extremism," Atkinson told MEE.

"Their methods were unusual and they were very unladylike for the day but what they were asking for was not radical, it is a basic human right."

Rudd said on Tuesday that the government would consider pardons for some suffragettes but that pardons for those convicted of arson or violent offences would be “trickier”.

MEE understands that the Respect Programme's lesson plans are currently being refreshed.

Teachers have been under pressure to address the issue of extremism since the introduction of the Prevent Duty in 2015 which requires them to have “due regard of the need to prevent people from being drawn into terrorism”.

But the implementation of Prevent in schools has been opposed by the National Education Union amid concerns that it is having a “chilling effect” on classroom discussion. 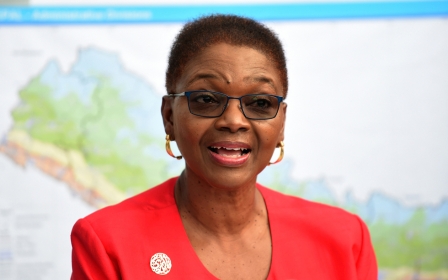 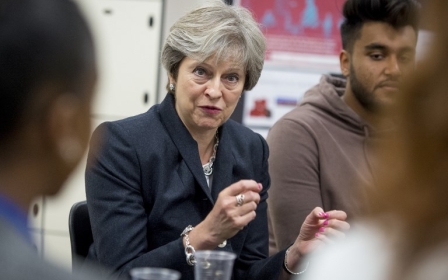 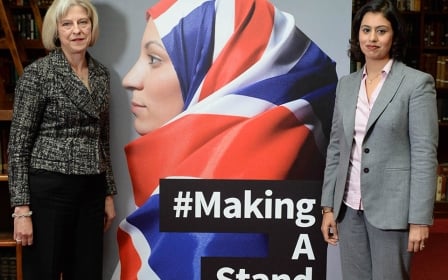