Syrian government forces and US-backed militias converged on the Islamic State (IS) group in separate offensives against the militants in the eastern Syrian province of Deir Ezzor on Sunday.

The US-backed Syrian Democratic Forces (SDF) alliance of mostly Kurdish and Arab militias said it had reached Deir Ezzor's industrial zone a few miles to the east of the city after launching operations in the area in recent days.

The Syrian army and its allies, backed by Iran and by Russian air cover, advanced from the west to seize full control of the Deir Ezzor-Damascus highway, a Hezbollah-run media unit reported.

The Syrian Observatory for Human Rights monitoring group said at least 17 civilians had been killed by Russian air strikes in Deir Ezzor on Sunday.

The attacks squeezed IS in its last major Syria stronghold in areas near the border with Iraq. The group has come under pressure since losing its de facto capital Mosul in Iraq this year and is surrounded by the SDF in Raqqa, its former Syria bastion.

The militant group still holds much of Deir Ezzor province and half the city, as well as a pocket of territory near Homs and Hama farther west, however, and is mounting counter-attacks.

Sunday's advances mean that US-backed forces and the Syrian government, boosted by Russian military support, are separated only by about 15km of ground and the Euphrates River in Deir Ezzor.

Much of northeast Syria to the east of the Euphrates is held by the SDF, which is dominated by the Kurdish YPG militia. The Syrian government and its allies are increasingly capturing the remaining areas IS holds to its west.

Government troops linked up with forces already in Deir Ezzor at the Panorama entrance to the city, bringing the whole road under their control for the first time in years, the Hezbollah media unit reported.

The Syrian army and its Iran-backed allies, which include Lebanese Hezbollah, this week broke a three-year siege by the militants of a government-held enclave in Deir Ezzor and an adjacent air base.

Syrian state TV broadcast footage of Syrian officers who had been holed up in Deir Ezzor emotionally greeting their superiors after being surrounded by IS since 2014.

The United Nations estimates about 93,000 people were living in "extremely difficult" conditions in government-held parts of Deir Ezzor, supplied by air drops to the air base.

Syrian government forces and their allies have been able to turn their attention to the fight against IS in eastern Syria after recapturing many areas in the west from rebels.

The SDF on Saturday announced an operation to capture northern and eastern parts of Deir Ezzor province and staged attacks from the northern countryside and southern Hasaka, which is under YPG control.

The SDF, backed by US-led air strikes and special forces on the ground, has captured most of Raqqa, upstream along the Euphrates, from IS.

IS has lost almost half of its territory across both Iraq and Syria, but still has 6,000-8,000 militants left in Syria, the US-led coalition has said.

The forces leading the SDF's operation in Deir Ezzor say they do not expect clashes with Syrian government forces, but will respond if they come under fire.

Syria's crowded battleground has shown the risks of escalation between world powers militarily involved in the six-year-old Syrian conflict.

In June, a US warplane shot down a Syrian army jet near Raqqa, and the SDF has accused the Syrian government of bombing its positions, raising tensions between Washington and Moscow.

The Cold War foes have also engaged over Syria, however, including setting up communication channels for flight safety in Syrian airspace.

Both countries say the priority in Syria is to defeat IS.

Rounds of Syria talks between world powers have increasingly focused on IS.

Negotiations in which Syria's opposition has repeatedly called for the removal of President Bashar al-Assad have failed to bring an end to the conflict. 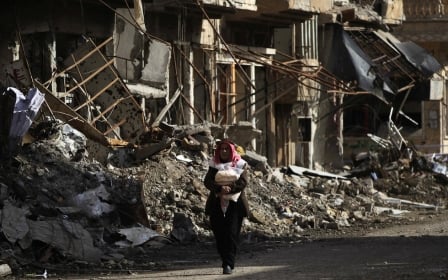