Behind closed doors, White House and Kremlin officials have disagreed on what the two leaders will discuss NEW YORK – A lot of attention has been focused around a meeting that does not seem likely in yielding any game-changing fix to Syria’s civil war.

Talks between the presidents of the United States and Russia – Barack Obama and Vladimir Putin – that are scheduled to take place on Monday have overshadowed discussions on tackling poverty at an annual United Nations summit.

Aid and development are the stated goals of the UN parley, but a four-year-old Syrian conflict that has claimed some 250,000 lives and sparked huge refugee flows to Europe dominates the behind-the-scenes diplomacy in New York.

Speaking at the UN, French President Francois Hollande announced that six French jet fighters had destroyed an Islamic State (IS) training camp in eastern Syria in a five-hour operation on Sunday – an expansion of French efforts against the group that have so far focused on Iraq.

US Secretary of State John Kerry spoke positively about the talks between Obama and Putin. Behind closed doors, White House and Kremlin officials have disagreed on what the two leaders will discuss and even who initiated the meeting.

“This is the beginning of a genuine effort to see if there is a way to de-conflict, but also to find a way forward that will be effective in keeping a united, secular Syria that can be at peace and stable again without foreign troops present,” Kerry told reporters on Sunday.

Obama and Putin disagree over Ukraine and the future of Syria, where anti-government protests quickly spiralled into an all-out civil war in 2011. Obama says Syrian President Bashar al-Assad must leave power, Putin continues to support his key ally in the Middle East.

Russia has increased military support to Syria in recent weeks, reportedly with tanks, combat aircraft and other hardware to bolster Assad’s embattled troops in their fight against several rebel militias in a complex war, including the so-called Islamic State (IS).

Both the White House and the Kremlin share concerns about IS, but disagree on their approaches to the hardline Sunni Muslim fighters that control swathes of Sunni-majority areas on both sides of the Iraq-Syria border. Putin says the Assad regime should feature in efforts to fight IS. The US rejects Assad and says IS can be defeated with US-led airstrikes and ground forces from the region, including some 5,400 moderate Syrian rebels who are being trained in a US scheme.

That project is struggling; some rebels have surrendered gear and vehicles to al-Nusra Front, an al-Qaeda linked militia. In comments to US television networks that were released by the Kremlin on Sunday, Putin said US support to rebels flouts international rules.

“It turns out that only 60 of these fighters have been properly trained, and as few as four or five people actually carry weapons,” Putin said. “The rest of them have deserted with the American weapons to join ISIS,” he added, referring to IS.

Some US allies are shifting position on Assad’s future. Britain says Assad could hold power in a six-month transition period; German Chancellor Angela Merkel says he should be involved in any peace talks that could help staunch refugee flows from Syria.

Jonathan Cristol, an analyst at the World Policy Institute, a research body, told Middle East Eye that he had low expectations from the US-Russia talks.

“Thanks to the crises in Ukraine and Syria, relations between the US and Russia are at their lowest point in the last 25 years. In this context, the chances of Russian officials being able to magically persuade American officials to change course on Syria are virtually nil,” he said.

“It’s important that Obama and Putin talk, but they can only really be discussing how they fundamentally disagree on Syria. Nothing that either leader can say to the other is going to lead to a substantive difference afterwards.”

Hussein Ibish, a scholar at the Arab Gulf States Institute, a Washington-based think tank, said that Obama would likely be on the back foot during talks with Putin because of US shortcomings in its handling of the Syrian war.

“US policy toward Syria is in crisis. It emphasizes avoiding the collapse of all national and governance institutions in the country, and so it ends up deferring to the current regime even though it is US policy that the dictatorship has lost all legitimacy and must go,” he told MEE.

“There has to be some kind of reconciliation between these contradictory imperatives before the administration can develop a policy on Syria that is internally coherent.”

Ibish warned that allowing Assad to stay in power during a peaceful transition process would “be a disaster” for Syria.

“Anything that smacks of support for the regime will only drive more Syrian Sunnis into the arms of terrorists, because the brutality of the regime has been primarily responsible for the hundreds of thousands of dead these past four years,” he said.

Instead of seriously tackling IS, Assad has promoted the Sunni Muslim extremists to burnish his own credentials and tarnish the myriad rebels seeking to overthrow him, added Ibish.

“This strategy has worked extremely well, and rewarding it would only strengthen the dictatorship but also strengthen the terrorists. They have a symbiotic relationship. They will either grow stronger together in the context of the sectarian conflict or they will simultaneously be weakened through the rise of alternative forces that seek to break the Gordian knot of sectarian violence in Syria,” he said. 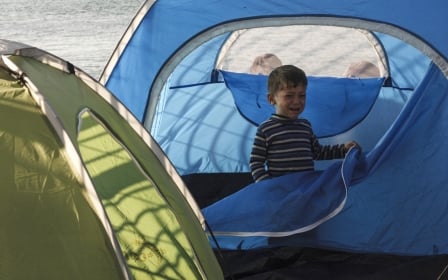