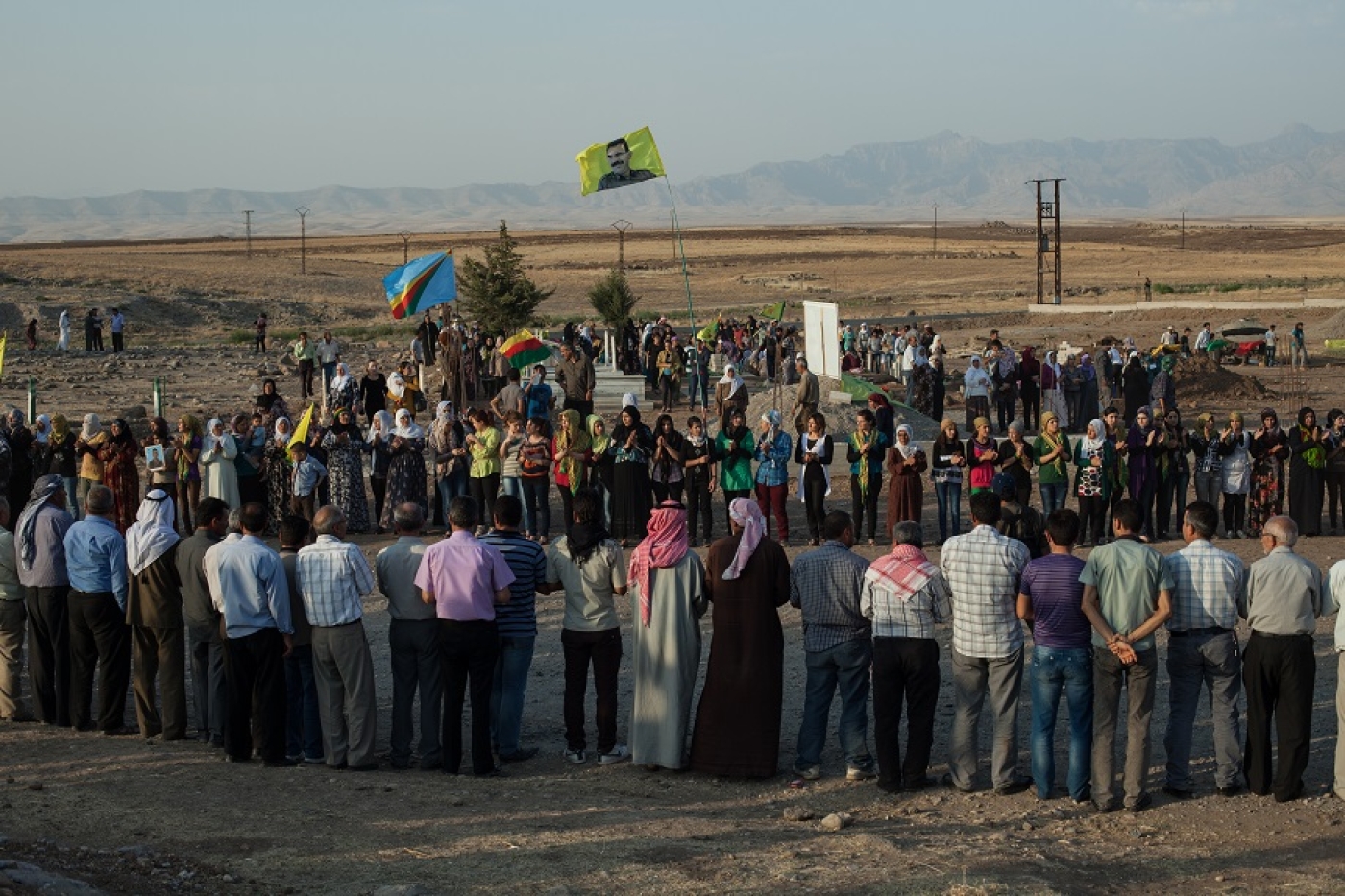 Mourners attend the burial of two fighters of the Committees for the Protection of the Kurdish People, 2013 (AFP)
By
Wladimir van Wilgenburg

ERBIL - The de-facto Kurdish autonomous administration in Syria has appointed Humaydi Dahmam al-Assi al-Jarba, a cousin of Ahmet Jarba, former head of the Syrian opposition, as a co-governor in the province of Hasakah, to show the world that they do not marginalize minorities.

“They want to send a message of democracy to the world that they involve all [ethnic] components in the management of the region, and that they will not decide everything by themselves [the Kurds],” said Imad Talati, a journalist working with pro-opposition channel Orient TV in Qamishli.

The legislative council of the canton administration of Cizire (Hasakah in Kurdish) appointed Humaydi Dahman al-Assi, a leading tribal head from the Shammar tribe, and Hadiyah Yusuf, a member of the Democratic Union Party (PYD) women’s organization Yekitiya Star (Star-union), as joint governors of the Syrian Hasakah district on 10 July after a vote.

The canton administrations in Kobani, Afrin, and Hasaka are dominated by the PYD, the Syrian branch of the Kurdistan Workers Party (PKK), and it’s armed wing, the People’s Protection Units (YPG).

This is the first time the PYD-dominated administration appoints their own governor to replace Hasakah governor Muhammad Ali Zaal al-Ali, who still wields power in the last remaining small pockets of control in the province of Hasakah, especially in the city of Qamishli. Hasakah is facing an ongoing assault by Jihadists of the Islamic State (IS).

The administrations in three districts in northern Syria are based on a Swiss-model and the ideology of the imprisoned PKK-leader Abdullah Öcalan to create self-ruled administrations in Iran, Iraq, Syria, and Turkey, in cooperation with local minorities.

As an example, the Kurds in Turkey appointed a Christian as a co-mayor in the city of Mardin in April. Then in January, the Kurds in Syria appointed the Kurdish independent politician Akram Hissou as Prime Minister, a Christian deputy Elizabeth Koreemet, and an Arab deputy Hussein Azzam.

Previously, the PYD failed to reach an agreement with the Kurdish National Council (KNC) that is     backed by Massoud Barzani, the president of the Kurdistan Regional Government (KRG) in Iraq, to jointly create de facto administrations in Northern Syria. Instead, the PYD worked with Christians and Arabs.

Abdulsalam Mohammed, a diplomatic relations member of the administration based in Qamishli told Middle East Eye that they appointed the Arab governor for his tribal ties.

“He represents the biggest Arab tribes and to strengthen the principle of brotherhood between nations in Rojava [Western], because Rojava is not only for Kurds as some people suggest.”

The Shammar tribe of Humaydi al-Jarba in the Hassakah province maintains good ties to the Kurds since it’s seen by the Kurds as one of native tribes in the region, and it is also one of the tribes that refused to fight the Kurds for the government after riots in March 2004. Humaydi al-Jarba himself  is known for his anti-government stance.

"The Shammar tribe has good relations with the Kurds, but there are only few Arabs who support this tribe," said Ciwan Ibrahim, general head of the Kurdish security police in northern Syria in Qamishli.

Other tribes from Raqqah and Deir ar-Zour that were resettled by the Syrian government along the northern border of the province of Hasakah in the 1970s participated in the crushing of a Kurdish uprising in the Hasakah province in 2004. Some of these tribes could support Islamic militants against the Kurds, or the Syrian government.

Although Syrian Kurds had tribal conflicts with the Shammar tribe in the past, the Shammar tribe helped the Kurds to take over the Yarubiya border crossing on October 26 from Jihadist groups of the Islamic State (IS), and sent additional tribal forces to secure the Yarubiya border crossing in Syria after the Sunni militant group took over several Iraqi cities in June. They also helped the Kurds in securing oil fields in the Hasakah province.

“I think they need to protect the border of the Jazira country and Jarba has his forces south of the border, and in villagers around Tel Alo,” said a Christian official in the administration.

Him Omar, the founder of the independent Syrian Kurdish news website Welati, sees it as a good development. “The Kurdish region is a mix of several ethnic and religious groups, therefore it’s no surprise that an Arab and Christian gets a leading role. We shouldn’t follow the mentality of the Syrian regime. The Kurdish National Council cannot accept this.”

Many Kurds say the tribal leader has a positive image among local residents in the province. “He refused to fight with the regime against the Kurds in 2004, and received a dagger from President Masoud Barzani a few years ago,” added Omar.

But although the new governor has good ties with Barzani and tribal ties to Ahmet Jarba, relations haven’t improved yet between the administration, the Syrian opposition and other Kurdish parties.

“There are already good relations [with Barzani], but now I think it is not good because of the new position of the Sheikh,” said Abdulsalam Mohammed.

PYD and the Syrian opposition

Kurdish rivals of the PYD suggest it’s a scenario by the Syrian government to control the region.

“This is another regime scenario to control the Kurdish region, so the Arab governor is one of the players in this spectacle and he can’t do anything to make relations [with Barzani]. It is not his decision, and Kurdistan is too busy because of it’s problems with Maliki,” said Zara Saleh, a member of the Kurdish Unity party.

Dr. Khaled Khouja, a representative of the Syrian Coalition in Turkey, told Middle East Eye that the Syrian coalition rejects the appointment.

“As coalition we didn't recognize the political decentralization of the Kurdish area therefore we oppose this step,” he told Middle East Eye.

In fact, the Syrian coalition in a statement denounced the move as a plan to partition Syria.

It is therefore unlikely that the Western policy is going to change since they support the Turkish-backed Syrian opposition that opposes any form of Kurdish autonomy.

“The Western policy is generally still supporting the Syrian Coalition, but Western countries still have contacts with PYD and the internal opposition [National Coordination Body]. Even if the primary support is for the Syrian coalition, we have wider contacts,” said a Western diplomat based in Erbil.

But he noted that although the West welcomes the inclusion of minorities, the West suspects the PYD as a modus vivendi with the Syrian government, although the PYD fiercely denies any relation with the regime.

“The PYD tolerates the regime in certain areas. The PYD and the Syrian regime have certain understandings still. This raises the question of how much of an opposition the PYD is,” the diplomat said.