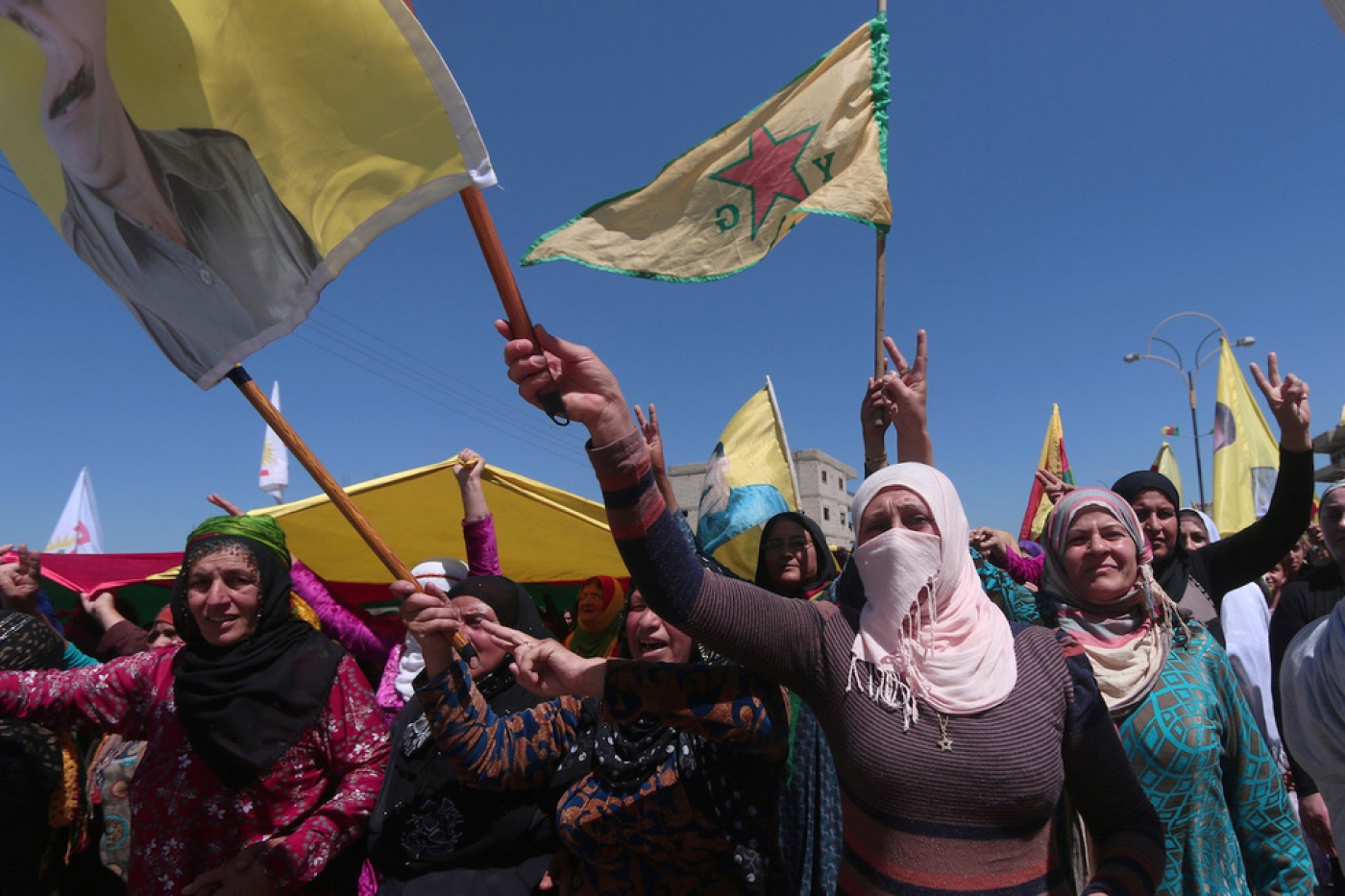 ERBIL, Iraq – Syria's Kurds plan to link up with Iraqi forces to create a new "corridor" stretching across the two countries and subvert an "embargo" imposed by Iraqi Kurds and their ally Turkey, senior officials have told Middle East Eye.

Iraqi forces, including the Iranian backed, Shia-dominated Popular Mobilisation Units (PMUs), are clearing the Iraq-Syrian border and Mosul of Islamic State fighters, presenting Syria's Kurds with the opportunity of new cross-border links that circumvent restrictions placed on their movements by the Kurdistan Regional Government, or KRG.

Senior members of the Syrian Kurd Democratic Union Party (PYD) told MEE they hoped the operations will aid their attempts to open a separate link with Baghdad, "break the embargo", and end their international isolation in northern Syria.

The PMUs, known in Arabic as Hashd al-Shaabi, this month launched an operation to clear IS out of the Iraqi-Syrian border south of the town of Sinjar, instead of trying to take the town of Tal Afar 50km to its east.

While the US has expressed concern over Iranian-backed fighters controlling border posts between Syria and Iraq, the Syrian Kurds sense an opportunity.

A senior official from the self-declared autonomous democratic federation of northern Syria, led by the PYD party, said he hoped this new link would break an embargo by KRG president Massoud Barzani's KDP party, enforced at the behest of Turkey, and make them less dependent on Damascus in the future.

"Not only for rebuilding, but for the people, so they can live in calm, and there will be food, clothes, and can sell their oil. But if the road is closed, we will resist," Gharib Hesso, the representative of the PYD in the Iraqi Kurdistan region, said.

"It would not only be good for Syria, but also for Iraq. The people in Mosul also have their families in Raqqa and Deir Ezzor. They can go to the border to help each other," he said.

"Maybe Turkey and the KDP will try to prevent this," said Hesso.

Both Turkey and the KDP see the PYD as being linked to the PKK, which has waged an insurgency in Turkey for decades.

The PMUs' move has alarmed the Trump administration. Some US officials fear that Iran would be further empowered by an Iranian corridor through Iraqi territory to Syria, as well as strengthening Syrian President Bashar al-Assad.

"They [in Washington] believe there is a corridor project which depends on the Hashd al-Shaabi that are close to Iran controlling the border points to facilitate overland transport via the Syrian desert to Palmyra and then to Assad's statelet," said Nicholas Heras, the Bacevich fellow at the Centre for a New American Security.

A US government official, speaking on condition of anonymity, said it was an "issue we're watching closely and we're keenly aware of the evolving events in the ground and their potential ramifications".

"In Iraq we're supporting the government of Iraq to re-establish control over the entire country and securing the Iraqi border will naturally be a big part of that," he said.

Before IS took Mosul in June 2014, the PYD was using the border crossing in Rabia in cooperation with Baghdad to smuggle in supplies and fighters to avoid the KDP-controlled border.

"We send aid from Mosul to Shingal and Rabia, we made a road ourselves, but then IS took Mosul, and from then it was necessary to go to the border crossing at Semalka," the PYD official said.

The PYD accuses the KDP of using the border crossing as a weapon against the PYD. Senior KDP officials deny they restrict humanitarian aid to northern Syria.

"It has been three years like this. Why there is an embargo?" Hesso said.

In the past, Baghdad funded the PKK-affiliated Sinjar Resistance Units (YBS) in Sinjar under the PMUs' umbrella to weaken the KDP. However Turkish and US pressure has stopped Baghdad from paying the YBS salaries this year.

While Turkey closed its borders with the Syrian Kurdish controlled areas for years, the KDP also from time to time limited border access to the Semalka border crossing after several power-sharing agreements involving the Barzani-backed Kurdish National Council (KNC) and the PYD failed between 2012 and 2014.

"There is no need for the PKK to make a problem for us. If the PKK help Shia and Iraqi militias to make a corridor through Ba'aj and Tal Afar to help the regime of Iran and Assad, then Turkey will want to enter too, this will make a lot of problems for Kurdistan," General Bahram Ali Siyasi, the head of the Peshmerga forces in Bashiqa told MEE in October.

A Western diplomat told MEE on condition of anonymity that the move to create a "PKK-PMU corridor" could possibly result in a Turkish reaction. On 25 April, Turkish air strikes already killed several Kurdish fighters in both Syria and in northern Sinjar, and Turkey is threatening further interventions in both Syria and Iraq.

"I don't think the Turks will say, ah, this is fine," the diplomat said. Turkey in the past already warned the PMU they should not move into Turkmen-populated Tal Afar.

"So, they [PMU] stopped [going to Tal Afar], since they knew that taking the highway [to Syria] would cause an [Turkish] intervention. There were already early signals they would use the alternative road towards Ba'aj, and now it's happening," the diplomat said.

Fanar Haddad, a senior research fellow at the Middle East Institute, told MEE it would be "perfectly reasonable that Iran would use their proxies and allies within the PMU to build a corridor to Syria," he said. "So it's not a question of whether or not the PMU want to do this, it's whether Iran will utilise their allies and proxies within the PMU to help cement this corridor."

The PMU denied any links to the PKK or PYD, and also deny they want to create an Iranian corridor.

"The PMU works under the leadership of the Iraqi forces and our operation is part of the ‘We are coming, Nineveh' campaign," PMU spokesperson Ahmed al-Asadi told MEE.

"Liberating this area doesn't mean it is for Tehran - in this desert you found a lot of IS fighters and al-Qaeda in the past, and we are going to liberate this area," he said.

Senior Syrian Kurdish officials also say they have no links to Iran.

"We have no relation with Iran, and Iran plays a bad role because they are afraid of our project, because there are also Kurds in Iran," Abdulkarim Omer, the head of foreign relations for Jazira Canton in northern Syria, told MEE.

"We want an end to the embargo. This is not related to Iran, this is propaganda from Turkey."

Hesso, the PYD official, said the US would not allow Iran to make such a corridor.

"America decides on this. Iraq is under US control. This would be difficult," he said. "If Iraq accept us, then America will also accept us. This is just propaganda to make it show that the PYD has relations with Iran, and the regime.

"They want to blacken our revolution."

But even if the Iraqi forces control the border again there is no guarantee that Baghdad would be willing to link up with the Syrian Kurds, and most likely would prefer Damascus.

"There is no relation with the Kurds in Syria, or any other party," PMU spokesperson Ahmed al-Asadi said.

"After the operation is finished and the area is liberated, the Iraqi government is not going to work with parties, organisations and politicians, only with formal governments."

However, this position could change since the Baghdad-backed PMUs and the Syrian Kurds both see Turkey as an adversary and IS-supporter. 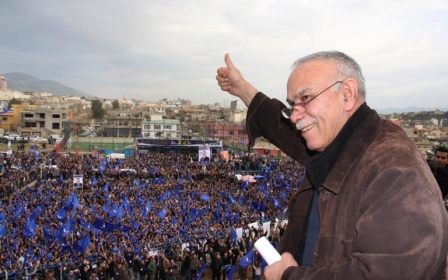