'There is a feud between us and this terrorist organisation,' said Ahmad Jarba, who hails from northeastern Syria, of the Islamic State Ahmad Jarba speaks during an interview with Reuters in Cairo, Egypt on 29 January 2017 (Reuters)
By
Reuters

A Syrian opposition figure who says he controls 3,000 Arab fighters has told Reuters they are training with US-led coalition forces in preparation to help drive Islamic State from its de facto capital in the city of Raqqa.

Ahmad Jarba commands the Syrian Elite Forces, described by the US military as a significant component of the coalition assembled against Islamic State.

Its involvement in the battle for Raqqa, alongside the Kurdish-dominated Syrian Democratic Forces (SDF), is welcomed by Washington, which is keen to broaden the political base of the opposition forces in the area.

"Now we are preparing for the battle of Raqqa," Jarba said in an interview in Cairo. "There is a training programme with the coalition forces. We will be ready to enter this battle in force and we are in the process of preparing for it to liberate our lands."

The SDF launched an operation in Raqqa province in November aimed ultimately at seizing the northern city from Islamic State. The first two phases captured territory to the north and west of Raqqa and the third will seek to take remaining areas.

One decision awaiting US President Donald Trump is whether to directly provide weapons to Kurdish fighters as they push toward Raqqa. Trump has made defeating Islamic State a key aim and ordered his joint chiefs of staff to devise a plan in 30 days to defeat the group.

The United States considers the Kurds allies in Syria but has said the Raqqa operation should be predominantly Arab, the ethnicity of most of its residents. The SDF already includes an Arab contingent, the Syrian Arab Coalition, but recruiting Arab allies has been a priority to ease ethnic concerns locally and in neighbouring Turkey.

Jarba said he had struck a deal with the US-led coalition in December to deploy his all-Arab force in the fight for Raqqa.

"In the last two months there have been meetings with senior officials of the American army and the international coalition forces against terrorism," he said.

Colonel John Dorrian, spokesman for the US-led Operation Inherent Resolve, described Jarba's men in December as a "notable" force, and said the Syrian was an influential player in the region.

The SDF also confirmed in December that Jarba's forces would be joining it from the second phase of the attack on Raqqa.

Jarba enjoys strong ties with Saudi Arabia and the United Arab Emirates and commands what he says is a force of 3,000, currently deployed between Deir Ezzor to the east, Raqqa to the north and Hasaka in the northeastern corner of Syria.

He aims to attract new recruits among locals who helped expel President Bashar al-Assad's army from northeastern Syria in 2011-12 before losing ground to Islamic State, which swept through the area in 2014.

"There is a feud between us and this terrorist organisation," said Jarba, who hails from northeastern Syria.

He welcomed Trump's move to heal differences with Russia, a key Assad ally whose military support has swung the six-year civil war in favour of the government.

"What we are hoping for is that there will be an American-Russian agreement, because the differences between America and Russia are what have harmed us as Syrians," he said.

Jarba said he would likely visit the United States in the coming months and may also travel to Russia. 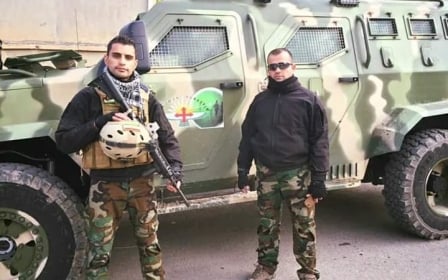