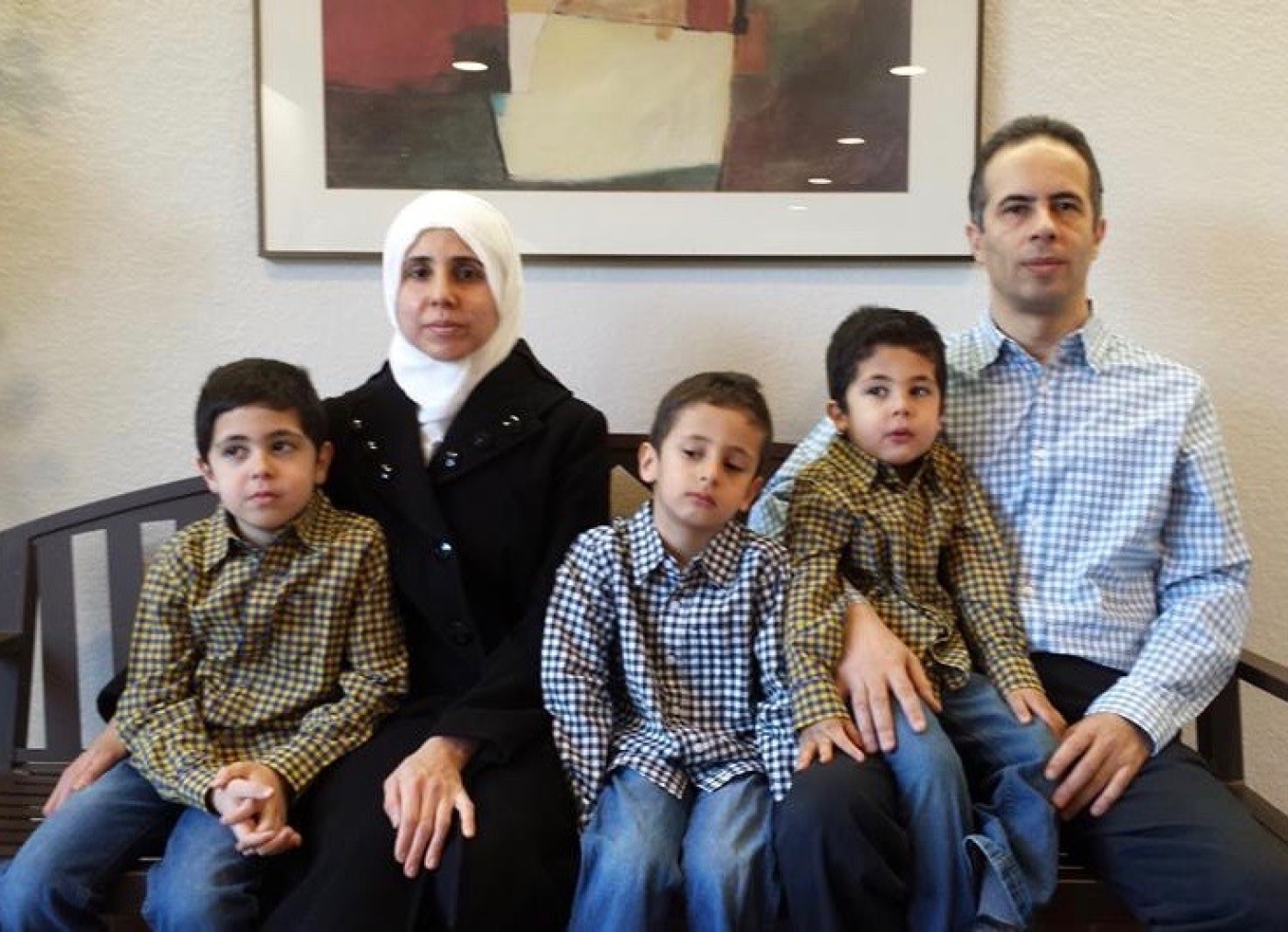 TORONTO, Canada – Mohammad al-Rayyan compares it with being invited into a home, then the moment you get inside all the doors are locked.

“This is what happened to my wife,” the Syrian father of three said.

“She was invited to come to Canada, and when she came, they locked all the doors on her and she can do almost nothing.”

Al-Rayyan’s wife, Dima Siam, is living in a state of limbo in Ottawa, the Canadian capital, after her application for permanent residency was rejected when she came to Canada with her family in late 2012.

Without legal status in the country, Siam – who is nearly three months pregnant with her fourth child – cannot get provincial healthcare coverage and is unable to enrol in English classes. And despite holding degrees in biology and teaching, she cannot get a job.

Al-Rayyan told Middle East Eye that Canada’s Citizenship and Immigration Minister John McCallum recently intervened on his wife’s behalf, and she will be issued a temporary resident permit.

But the temporary resident permit has yet to arrive and it does not nullify the deportation order.

“We appreciate that the minister intervened. It’s in the process now,” al-Rayyan said.

“[But the temporary resident permit] doesn’t mean the deportation order is lifted and that doesn’t mean she is going to get [permanent] status,” al-Rayyan said.

An IT systems engineer, al-Rayyan received Canadian citizenship in 2002. In late 2006, he returned to visit his family in Syria, which is where he met Siam.

The couple married less than a year later and al-Rayyan stayed in Syria to be with his new wife and growing family.

When the Syrian revolution began in 2011, al-Rayyan, his wife and children were living in the Yarmouk refugee camp south of Damascus. As the violence worsened, Canadian officials in the capital urged the family and all other Canadians to leave Syria.

Upon their arrival, al-Rayyan briefly went on social assistance while he searched for a job, which he secured a month later. At the same time, he applied to sponsor his wife for permanent residency status.

Al-Rayyan submitted the sponsorship application with a letter showing that he had been offered a job. “By the time they registered my application, I had been working for 20 months,” he said.

But Canadian immigration officials told al-Rayyan that he would have to repay the money he received while on social assistance – thousands of dollars, including child benefits, he said – for his wife’s file to be processed.

“I came here from a war zone. Our apartment in Syria was destroyed. We had to leave my mother behind. We were traumatised when we arrived,” he said about the decision to go on social assistance while he found an apartment, bought furniture, registered his eldest son for school and sought employment.

Finally, despite paying back the money, Canada denied Siam’s permanent residency application, and last January she received the deportation order.

The family recently made a request for permanent residency on humanitarian and compassionate grounds, al-Rayyan said.

But the government now says permanent residency may not be issued until Siam completes a medical examination – including an X-ray to check for tuberculosis – and that cannot be done while she is pregnant, al-Rayyan said.

“We are aware of Ms Siam’s case and [Immigration, Refugees and Citizenship Canada] is working with her to address the situation,” department spokesperson Remi Lariviere told Middle East Eye in an emailed statement.

Lariviere declined to comment on the case any further without signed consent from Siam.

He said anyone applying to stay in Canada temporarily or permanently must undergo an immigration medical test, administered by an IRCC-approved physician, who may recommend chest X-rays and lab tests.

Ottawa’s position on the matter is an “incredibly inflexible reading of the immigration law and the regulations,” said Matthew Behrens, an activist with the Rural Refugee Rights Network who has campaigned on behalf of Siam.

“They’ve got the discretion to look at this and say let’s look at the broader context: This is Syria. Anyone who is even 5 percent awake knows that this is a dangerous place, and nonetheless they issued her a deportation order, and she’s been under that deportation order ever since,” Behrens told Middle East Eye.

In mid-March 2012, the Canada Border Services Agency (CBSA) put in place an administrative deferral of removals (ADR) for Syrian nationals in Canada, meaning that Syrian nationals already in Canada could not be deported because of the ongoing war.

Still, the deportation order is not cancelled.

Instead, Behrens said, an ADR stipulates: “Because Syria is currently a war zone, we’re not going to send you back right now; however we do intend to. That could be next year, if they deem conditions are safe. That could be 10 years from now. We don’t know.”

In February 2015, Canadian officials instructed Siam to fill out a pre-removal risk assessment, in relation to the deportation order, al-Rayyan said. After a long wait period and at great cost to the family, Canada then said the PRRA was issued in error, and the family should instead apply for permanent residency on humanitarian and compassionate grounds, he explained.

According to Behrens, about 800 Syrian nationals were issued departure orders from Canada in 2012 and 2013.

CBSA spokesperson Esme Bailey told Middle East Eye the agency could not comment on the specifics of Siam’s case because of privacy concerns, but she said 109 Syrian nationals are currently subject to ADRs.

Behrens said Canada should put a moratorium on deportations – known as a Temporary Suspension of Removals (TSR) – to Syria and immediately grant permanent resident status to all Syrians living in Canada under ADR orders.

Canada currently has TSR orders in effect for Afghanistan, the Democratic Republic of Congo and Iraq. Asked whether Canada will issue a TSR instructive for Syrians, Bailey said: “It is important to note that TSR and ADR are similar.

“Their policy intent is to provide individuals who would otherwise be removed with a temporary reprieve from removal due to a substantive and generalised risk to the entire civilian population,” she said.

While Siam cannot be deported presently, living under the fear of deportation has taken its toll on her family.

Al-Rayyan said he fainted in the waiting room at a clinic from stress after taking his wife in for a check-up. The couple’s eldest son, Anas, remembers what life was like in al-Yarmouk camp in Syria and fears for his mother’s safety.

“He is traumatised. He is scared,” al-Rayyan said. “For example, he wouldn’t dare stay in another room [because] he is afraid that somebody will take his mother from him.”

The Liberal government of Prime Minister Justin Trudeau has resettled more than 27,500 Syrian refugees in Canada since last December.

The Syrian refugees – sponsored by both the government and private groups including churches and community organisations – were granted permanent residency upon arrival in Canada.

“They will enter this terminal as refugees,” said Heidi Jurisic, the federal immigration department’s director for the Greater Toronto Area, at the city’s Pearson airport in December. “They will leave as permanent residents of Canada.”

Behrens said Minister McCallum should intervene “to immediately land [Siam] in the same way that he landed” these newly arrived Syrian refugees.

While al-Rayyan said he was happy the government welcomed so many Syrians, seeing them get permanent status in Canada immediately has also been bittersweet.

“When you see the country is welcoming tens of thousands of people, and [Dima] was brought in in almost the same way,” he said, trailing off. “She was brought by the previous government. Why wasn’t she given the same rights?”

An online petition calling on Canada to grant Siam permanent residency has garnered nearly 22,000 signatures to date and demands for government intervention in the case are growing.

Last month, Canadians across the country began a two-week chain fast in solidarity with Siam, with dozens of people fasting for one to four days at a time. Activists also organised a letter-writing campaign on 7 June.

Al-Rayyan said it is this support from Canadians that has kept his family going.

“We are looking at the bright side of this. It has been very difficult, very tough, but it has also shown us how great Canadians are,” he said.

“We hope that reflects also on the government’s policies and we hope we see reform in our [Citizenship and Immigration Canada] system so no other families have to bear what we have been bearing.”