Children face severe malnutrition, while the Syrian government continues to bomb the enclave in defiance of a July 'de-escalation' agreement Residents carry the bodies of victims of shelling by Syrian government forces in the town of Douma, in Syria's East Ghouta region (AFP)
By
Alex MacDonald

The rebel-held enclave of East Ghouta in Syria is facing a critical humanitarian crisis, the UN and local activists say, as government bombing and siege tactics kill dozens of civilians and bring many more to the brink of starvation.

Over the weekend, the area was hit by further air strikes, including a purported chemical weapons attack, which killed at least 19 people.

According to the Syrian American Medical Society, who have doctors working in the area, it received patients "suffering from constricted pupils, coughing, vomiting, and bradypnea" - or abnormally slow breathing.

They said that the "chemical agent may have been phosphorous" but warned that lack of medical supplies in the besieged district made it "difficult for doctors to effectively diagnose and respond accordingly".

The latest attacks excerbate what the UN has branded a "critical" humanitarian situation in the district, which has been besieged since 2013 and where 400,000 people live.

Bassam Khabieh, a Ghouta-based photographer who in late October documented the grim effects of malnutrition on the district's children, told Middle East Eye that the situation was becoming increasingly dire.

"Food is in short supply," he told MEE. "And it is so expensive. Most important medicines are missing now, especially those used for cancer, heart disease and kidney failure.

As usual following air strikes in Syria, volunteers rushed to helped the civilians caught under the rubble. One video released on social media showed volunteers with the Syrian Civil Defence - commonly known as the White Helmets - pulling a girl, still living, from the rubble of her home:

Anas Altaan, a volunteer with the White Helmets, told Middle East Eye that his organisation had not been able to access the area struck by the alleged chemical weapons attacks, which he said was primarily inhabited by rebel fighters, but said that "warplanes and artillery continue to bomb residential areas".

Altaan, who is based in the town of Arbeen, said that the siege was robbing his town of vital resources and the continued bombardment was making life increasingly difficult.

"Wheat, sugar and drugs for cancer," he said. "There is a lot we don't have - but this is the most important.

"The international community must find a way to stop the bombing of civilians."

The Syrian army's bombing campaign has left entire families buried under rubble. The Syrian Observatory for Human Rights said at least 80 civilians including 14 children, had been killed since Tuesday, while hundreds had been injured.

Firas al-Abdallah, a media activist based in the town of Douma, said there had been 250 air strikes in the last four days. In one attack, a family of six was all killed.

Rocket fire by rebels into Damascus has also left 16 people dead since Thursday, while Salafist rebel group Ahrar al-Sham launched an assault on the military base in the nearby town of Harasta - something SOHR head Rami Abdel Rahman said was being used as a "pretext to target all of eastern Ghouta".

East Ghouta was, in July, nominally included as a part of a deal struck by Turkey, Russia and Iran to establish "de-escalation zones" which led to several months of relative peace.

However, the past week has seen a renewal of bombardment and hopes of a resolution to the crisis dashed.

Zakaria, a care worker at an orphanage relief charity in the Sakba area, told MEE that malnutrition was having a devastating effect on the district's children.

He highlighted the case of Yosra al-Telawe, six-year-old girl from the town of Hateta Turkman.

"She struggles from brain paralysis as well as lack of nutrition," he said. "Her weight is only 16kg, and her father barely earns a living. She needs milk which is rare, and she just lives on few pieces of bread."

"We have demanded the evacuation of Yosra as well as so many other children who are in dire need and under risk of death - and no-one is moving to save their lives as well as the thousands besieged."

Since protests against the Assad government in 2011 spiralled into civil war, much of Syria has changed hands between the government and rebel groups.

From a peak in 2014 when large swathes of the country were held by rebel forces, now only eastern Ghouta, Daraa and Idlib province remain in their hands.

The last year has seen repeated clashes between different rebel groups, however, with the likes of Faylaq al-Sham and Ahrar al-Sham all vying for power.

White Helmet volunteer Aladdin Juha was killed on Sunday 19th by cluster bombs whilst saving lives. He is the 4th member of the Eastern Ghouta team to be killed in a week. pic.twitter.com/1ZEO1bh5tb

This has stood in marked contrast to the Syrian government and its allies who are emboldened by victories over Syrian rebels in Aleppo and the Islamic State group in Deir Ezzor.

Considering its location, analysts have suggested that eastern Ghouta is "too close to the capital" for the government to leave it alone.

"Obviously, the de-escalation deal in Ghouta isn't going too well," said Aron Lund, a fellow with the Century Foundation. He added that rebels had "little chance" of surviving the assault.

Though the UN is preparing a new round of peace talks for 28 November in Geneva, locals remain sceptical that anything can tie the hands of the Syrian government.

Firas al-Abdallah scoffed at the suggestion that the de-escalation agreement had alleviated the troubles facing East Ghouta.

"It never stops," he said. "We have no de-escalation here in Ghouta. The agreement is only ink on paper." 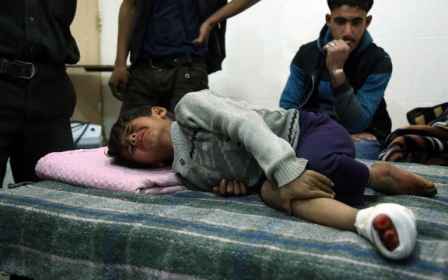