Salafi brigade fighters closed off the city's entrance for hours on Wednesday, threatening to impose a siege if conflict with Islah went on 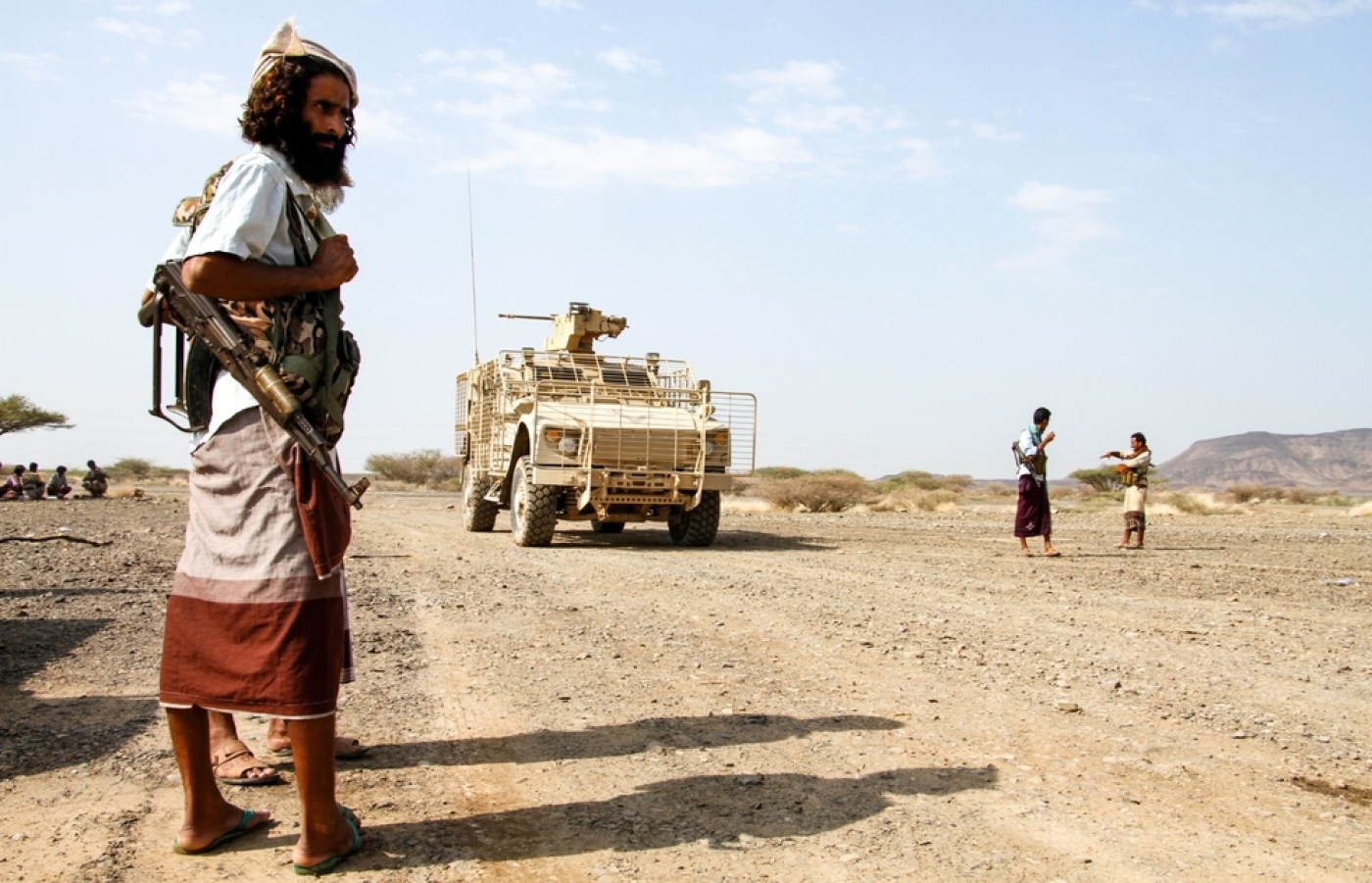 TAIZ, Yemen - As the Yemeni conflict rages on between Houthi rebels and the Saudi-led coalition backing President Abd Rabbu Mansour Hadi, on the ground, alliances are fraying.

On Wednesday, Salafi fighters blockaded the only entrance to the southwestern city of Taiz for hours in an alleged bid to pressure a fellow pro-Hadi group in the city - the latest flare-up in an ongoing turf war within the pro-government coalition, while civilians are left to suffer the consequences.

A history of collaboration and rivalry

When Houthis took over Taiz in April 2015, Salafis and members of Islah – the Yemeni branch of the Muslim Brotherhood - were fighting the Houthis shoulder-to-shoulder, under the leadership of the Popular Resistance.

The “Popular Resistance” group, bringing together civilians who took up arms to fight the Houthis, was backed by Yemeni government forces and the Saudi-led coalition to recapture parts of Taiz - breaking the Houthi siege on Taiz from the southwest in August 2016.

Just as clashes between the Houthis and pro-Hadi forces in Taiz dwindled in early 2017, conflict emerged between Salafi and Islah fighters.

Islah has accused Abu al-Abbas - whose real name is Adil Abduh Fari - of refusing to relinquish control of public institutions in Taiz to the government, while Abbas himself has accused Islah of stealing Popular Resistance funds.

The recriminations devolved into full-blown confrontations earlier this year between the 22nd Brigade and fighters belonging to the “Abu al-Abbas battalion”, leading to dozens of deaths and injuries.

Hadi appointed a presidential committee earlier this month seeking to appease tensions between Salafis and Islahis in Taiz, notably by reclaiming public institutions from both groups - in vain.

On Saturday, Abbas announced that his battalion would leave Taiz by early September, demanding that government authorities secure them safe passage out of the city.

"To save the bloods of Muslims and to keep our word that we will not fight inside the city, we have decided to leave the city together with our families, and we will leave the city to the Islah party," his press release read.

While Abbas remained vague as to where he and his fighters might be heading, local reports have suggested that he may be going to Aden, where the UAE - one of Abbas’s financial backers - has a strong influence.

In his statement, Abbas went on to accuse Islah of “stabbing Salafis in the back”.

But Islah rejected the accusations, demanding that the presidential committee step in to de-escalate the war of words.

"Those accusations are false and we do not know why there is this insistence [by Abu al-Abbas] to twist the facts against Islah," a press release by the party read.

Islah minimised its role in armed forces, drawing a distinction between the political party itself and the 22nd Brigade.

"We are a party that does not have relation with weapons,” it said. “We open our hands for unity and call for weapons to only be with military and security forces."

A closed road and traded accusations

Just as many members of the Abu al-Abbas battalion had withdrawn from the frontlines pitting them against Islah supporters in Taiz and were preparing to leave the city, a number of the battalion’s fighters blocked the only entrance to Taiz in the government-controlled southern side of the city early on Wednesday.

Between 2am and 10am, the fighters prevented cars, trucks, motorcycles, and even pedestrians coming from the direction of Lahj and Aden from entering Taiz - only allowing in women and children.

After 10am, people were once again allowed through, only to encounter a number of new checkpoints in the area manned by the Salafi brigade.

"The siege today was a signal to the Islah party that we are still here and can respond to any harassment against Salafis," a fighter, wearing typical Yemeni dress instead of a military uniform, told Middle East Eye while standing at one such checkpoint on Wednesday evening.

The fighter accused Islah members of breaking into the homes of Salafi fighters in Taiz and threatening their families.

"The Islah party wants this escalation," he added. "If Islah will continue to storm the houses of Salafis, we will impose a complete siege on the city until they respect Salafis."

Mohammed al-Yussofi, an Islah member in Taiz, slammed the road closure when speaking to MEE.

"The presidential committee is still working in Taiz, and if there are any tension between Salafis and Islah, they should go to the committee," he said. "The siege will affect all residents of the city and not only Islahis, so I hope that fighters of Abu al-Abbas think this issue over and stop threatening civilians."

A spokesperson for Abu al-Abbas told MEE that the move to close the entrance to Taiz was a decision taken by individuals who did not represent the battalion as a whole.

If Islah will continue to storm the houses of Salafis, we will impose a complete siege on the city

"The leader Abu al-Abbas did not direct the fighters to blockade the city, and when the leadership [of the group] found out about the siege, it immediately ordered the fighters to lift it," he said.

"We take civilians into consideration and we are trying to help them and reduce their suffering, so it is irrational to impose a siege on the city."

Governmental and military leadership in the Taiz province did not respond to MEE’s requests for comment on the incident.

While the fighter who spoke to MEE at the checkpoint said those who had implemented the road closure were acting in defence of Salafis in Taiz, Middle East Eye saw that many were chewing qat - a popular stimulant in Yemen frowned upon by conservative Muslim groups - and did not sport the longer beards typical of Salafis, suggesting that they may have been non-Salafi fighters who were incorporated into Abu al-Abbas’s forces more recently.

The differing views on the road closure inside Abu al-Abbas’s forces raise questions over possible divisions within the group, on top of the ongoing animosity between pro-Hadi factions in Taiz.

‘Militias do not care about civilians’

Meanwhile, civilians told MEE of their frustrations with the latest escalation of tensions in a city already fraught with violence.

Five bodies at dawn: The mystery that has left this war-torn city reeling
Read More »

"I bring vegetables every day from Bani Hammad to sell them in Taiz, but this morning the fighters of Abu al-Abbas prevented us from entering," Raafat al-Hammadie, a 36-year-old truck driver, said. "I tried to pass the checkpoint, but they told me that there are directions from the leadership to prevent us."

Some civilians had to resort to paying bribes to the Abu al-Abbas forces in order to enter Taiz.

"Those fighters need money, so they resorted to extorting civilians, as civilians are always the weakest during wars,” Hamid al-Nabhani, a dentist in Taiz who paid 2,000 Yemeni rials ($8) at a Salafi checkpoint, hypothesised.

Hammadie said the road closure reminded him of the days when Houthi rebels had full control of Taiz two years earlier.

"There is no difference between the Houthis and those militias - both do not care about civilians," he said. "We hate the Houthis because they besiege Taiz and they kill civilians and we will hate Salafis more than the Houthis if they do the same scenario."

Hammadie said he was disillusioned by the conflict between pro-government factions in the city.

"When we dream about liberation, we face the effects of fighting between new opponents inside the city,” he said. “So I hope that Salafis and Islahis will stop fighting in the city."