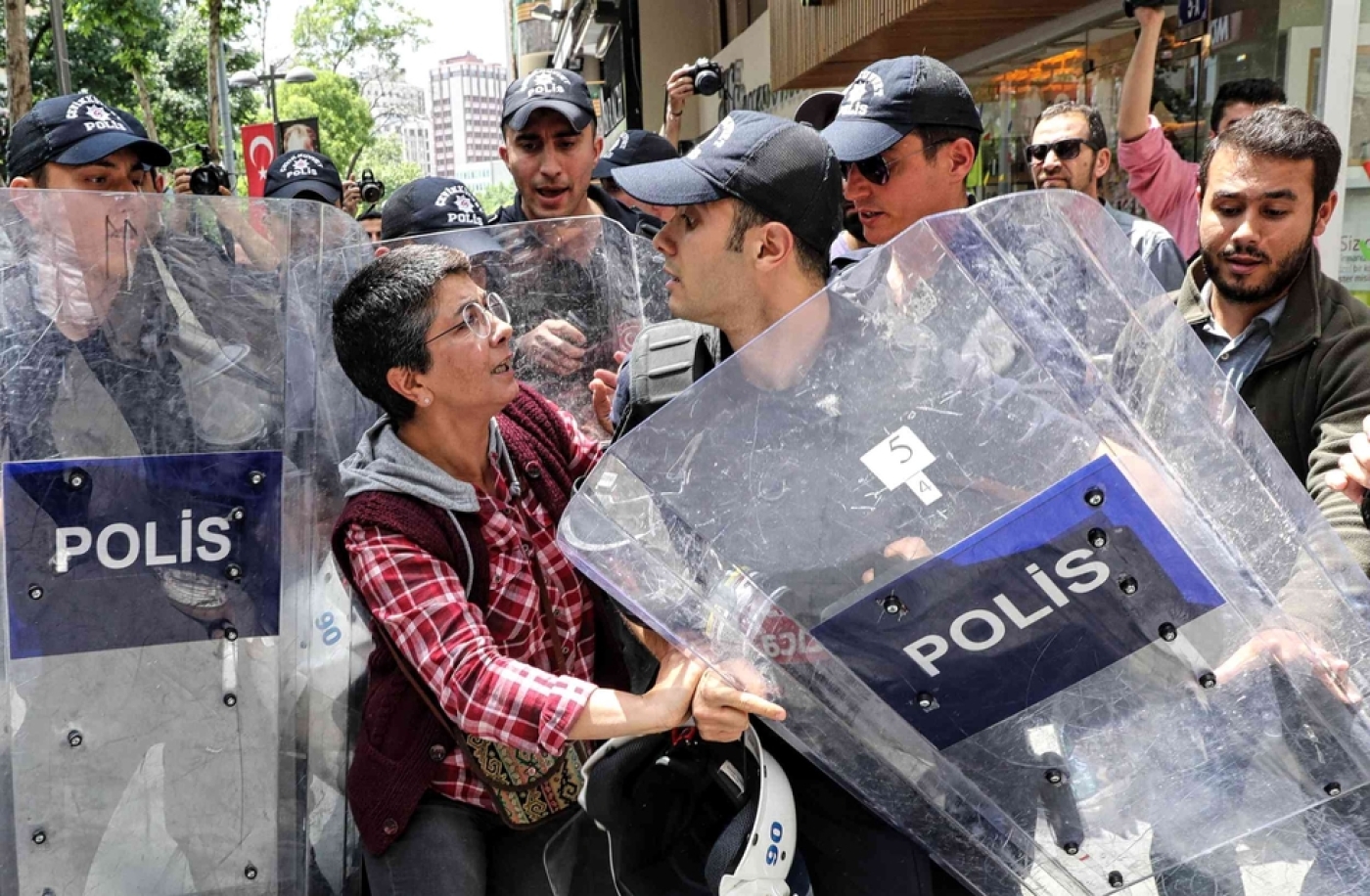 Riot police clash with protesters, who back teachers on hunger strike, in Ankara in June 2017 (AFP)
By
Suraj Sharma

ISTANBUL, Turkey – Sacked, blacklisted, silenced. And stripped of the right to a regular life and all hope - but still Ilhan Koyu and Aynur Barkin consider themselves fortunate.

Both are elementary school teachers who were sacked almost a year ago, when the Turkish government issued its first emergency decree to crack down on members and supporters of Fethullah Gulen's movement.

Authorities hold Gulen, a US-based Turkish preacher, and his followers - known as Gulenists - within the state structure as responsible for last July's failed coup bid.

But Barkin and Koyu are by no means Gulenists. According to them, their crime is simply holding leftist views.

Barkin told Middle East Eye: "We always opposed the AKP's (Justice and Development Party) education policies and were always vocal about it.

Barkin, 37, a teacher for 12 years, said the government was targeting their very "existence" with its actions.

"We are blacklisted on the social security system as terrorist so we can't get a job anywhere else," she said, "not even in the private sector because employers are afraid." She said she and many of her acquaintances had applied for other teaching jobs but were turned down without any explanation.

"We are banned from leaving the country in order to try our luck elsewhere. This means only one thing: the government doesn't want us to exist."

How teachers have been targeted

The first year of the Turkish government's post-coup crackdown has resulted in more than 50,510 arrests, 111,240 public sector workers sacked and 32,180 suspended out of a public workforce of 3.5 million.

The professions of the dismissed and suspended vary from soldiers, police and judges to teachers, nurses, hospital staff and even forestry officials.

The government moves against Gulenists have enjoyed broad support from all stripes of Turkish society. However, that backing gradually transformed into concern and criticism once it became clear that the authorities were going after all their political opponents.

The international community - especially in western European states - have been warier about the crackdown since the beginning and cautioned about human rights violations, especially given the scope and speed of the government's actions.

But Ankara has equated such concerns with support for the coup plotters, and part of a wider anti-Turkey campaign.

Turkish President Recep Tayyip Erdogan, in an interview with the BBC which aired on 14 July, dismissed a question about the thousands of livelihoods affected by the purge. He said that "the state was not responsible for providing jobs to everyone" and that "those affected could find work in the private sector".

Koyu, 29, from the south-eastern town of Hakkari, was teaching in Istanbul for four years when he was suspended from his job, just four days after the coup. He was then dismissed via decree a short time later.

'What is being done to us is not just dismissal from our jobs. It is far worse than that'

He, like Barkin and many others, were not personally informed of their dismissal but learned of it online, where lists of those expelled by decree are published on the website of the state's Official Gazette. He said the only reason cited was "affiliation with a terrorist organisation".

Koyu said his only affiliation and membership was with the Egitim-Sen educators' union, which is a legal organisation. It operates under the umbrella of KESK, a leftist confederation of trade unions representing public sector employees.

"Our union supports free education and the right to schooling in the mother tongue," said Koyu. "It is also vocal in its opposition against the AKP's education policies so I suppose that makes us the enemy."

Two examples of the uphill battle faced by suspended and dismissed teachers are those of Nuriye Gulmen and Semih Ozakca. Both have now been on hunger strike – surviving only on a liquid diet of saline and sugar drips - for more than 100 days, starting on 9 March in Ankara, demanding that they be reinstated in their jobs.

Security forces have constantly broken up supporters' protests in front of the Human Rights monument on Yuksel Street, where the pair launched their strike. But their actions have only landed them in jail.

The interior minister, Suleyman Soylu, has on multiple occasions accused them of being linked to the DHKP-C, a Marxist Leninist group that endorses violent means to attain its goals. The organisation is designated as terrorist by Turkey, the US, the UK and the EU.

Gulmen and Ozakca's lawyers and supporters, however, say that these accusations are unsubstantiated and that neither teacher has ever been charged or convicted of any link to the group.

'This is not the Turkey I know'

Koyu said he is aware of at least 35 suicides of education workers caused by these expulsions via decree. He said he considered himself fortunate because he is single with no dependents.

Being a registered union member, he said, also means that he receives a monthly stipend slightly lower than the minimum wage of $395.

"There are families with small kids where both parents are dismissed. They can't deal with the pressure of explaining to their kids why they can't even afford to buy them the most basic of things. There are also many who have to cope with accumulated debt."

The government has conceded that some dismissals and suspensions might be wrongful and has established a commission to hear complaints.

'There are families with small kids where both parents are dismissed'

The justice ministry announced last week that the European Court of Human Rights (ECHR) had rejected 12,600 applications out of 24,600 submitted to it concerning wrongful dismissal in Turkey.

All local means of redress need to be exhausted before a case can be made to the ECHR.

'These young people don't deserve to be treated like this. This is not the Turkey I know'

Barkin said: "It took them a year to set up a commission. There are more than 100,000 people dismissed. This is just another ploy by the government to prevent us from attaining justice. They will just string us along for years. I will apply nevertheless. What other choice do I have?"

In the meantime, Koyu, Barkin and 20 to 30 other dismissed teachers hold a sit-in, three afternoons a week, at the public square in Istanbul's liberal suburb of Bakirkoy, where they draw lots of public support.

They protest their dismissals and use chants, songs and even dance to raise awareness about their plight. Meliha, a housewife in her late 60s, sits with them most afternoons.

"I just sit here with them to show my support," she said. "These young people don't deserve to be treated like this. This is not the Turkey I know."

But the prevailing mood is mostly one of despair.

"We can't even afford to buy books to read anymore," said Koyu.

"What is being done to us is not just dismissal from our jobs. It is far worse than that. We are being deprived of the right to live."