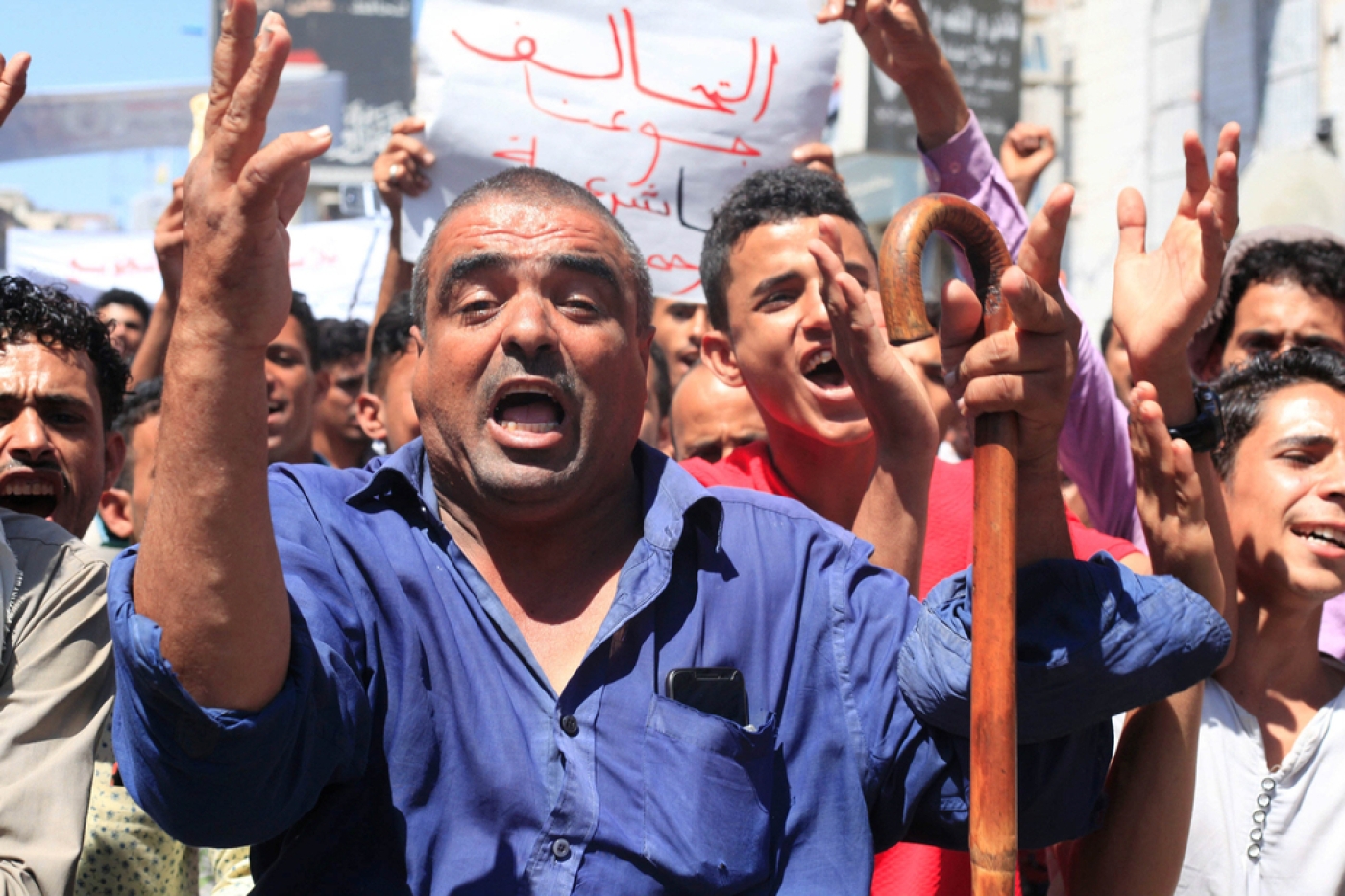 Protesters demonstrate against the deteriorating economy in Taiz, Yemen, on 4 October 2018. (Reuters)
By
MEE correspondent

SANAA – Thousands of Yemenis took to the streets of the southern city of Taiz on Friday, railing against the government's mishandling of the economy and a Saudi-led coalition fighting on its behalf.

The scene was quite different three years ago, when the city's residents also flooded its streets and squares, then thanking the coalition for intervening against the Houthi rebels in support of Abd Rabbuh Mansour Hadi's government.

Instead of supporting the legitimacy, the coalition has turned into an occupier

Residents erected banners thanking the Saudis and plastered walls with pictures of King Salman in appreciation.

Day by day, however, support for Hadi and the Saudis has dwindled, as the war drags on, the economy spirals out of control, and more and more people are forced into poverty.

Now, the people of Taiz accuse the Saudi-led coalition of being the main reason behind Yemen's worsening situation.

Where once images of the Saudi king were put up with fondness, now they are being torn apart by Yemenis sick of war, poverty and dwindling sovereignty.

"Instead of supporting the legitimacy, the coalition has turned into an occupier," one banner seen on Friday read.

"Instead of opening the door for Yemeni asylum-seekers, Saudi exiles Yemeni expatriates," read another.

Ahmed al-Masani, a 38-year-old protester in Taiz city, told Middle East Eye: "I thanked the Saudis in 2015 because I believed that they would help Yemenis and we would overcome our suffering, but the Saudis’ intervention aggravated our lives."

Masani spoke to MEE from Jamal Street as demonstrators were gathering to protest.

"In March 2015, the Saudis promised that they would recapture the whole country in two weeks, but they haven’t been able to do it in more than three years. Instead, they led the country towards famine."

Before the Saudi intervention, Yemen was already the Arab world's poorest country. Since 2015, however, the country has entered a terrible tailspin.

The United Nations estimates that 22.3 million of Yemen’s population of just under 30 million are in need of aid, with 8.4 million of them at risk of starvation.

Meanwhile, a cholera epidemic has dogged the country, thousands of people have been killed in fighting and bombardment, and the Yemeni rial's value has halved.

As the economy worsens, prices of essential goods are rocketing.

Masani was working in marketing with a local company, but he lost his job in 2015 and is now unemployed. He believes that the intervention of the Saudi-led coalition has not helped his country.

Though Taiz city has mostly been retaken by pro-Hadi forces, much of the eponymous province and some of the provincial capital remain in Houthi hands.

Take back the wealth

Friday’s protest was a follow-up to an equally large one the day before, and Masani said he and thousands of other Taiz residents will not stop protesting against the coalition.

"Yemenis are starving to death because of the increase of basic commodities' prices, while the Saudis are enjoying their life and they have not rescued Yemenis from famine," he said.

There is no difference between the Houthis and the Saudis, as both of them consume the Yemeni wealth and are behind our suffering

Masani accused Saudi Arabia of preventing the Hadi and his government from returning to Yemen, and said Yemeni wealth is under the control of the coalition.

"We do not beg the Saudis to help us, we demand that they leave our country, and we will manage our wealth ourselves," he said.

"The oil wells in Marib, Shabwa and Hadhramout are under the control of the Saudis, and they closed the oil fields. We want President Hadi to return to Yemen and resume the production of oil."

Though Yemen is not oil rich like its Gulf neighbours, its oil fields have in the past been an important source of revenue.

Most of the fields, if not all, are in now under control of pro-government forces, but output, already declining since 2004, has been negligible for the past three years, only contributing to the economic gloom.

However, some production has recently been brought back on line, and at the start of August, the country exported its first shipment of oil since 2015, with 500,000 barrels of crude from the Aqla area of Shabwa going to a Chinese petroleum company after a global tender in which 35 companies took part, Abu Dhabi-based The National reported on 2 August.

Oil-producing provinces would receive 20 percent of revenues from the crude they produce, the report said, citing the oil and minerals ministry.

In an attempt to prop up Yemen’s ailing economy, the Saudis this week announced they would hand the country $200m. Many Yemenis, however, believe this will not help end the suffering.

"We do not need the meaningless amount from the Saudis, we need them to leave us to invest our own wealth," Masani said. "There is no difference between the Houthis and the Saudis, as both of them consume the Yemeni wealth and are behind our suffering."

Essam al-Sharjabi, another protester in Taiz, told MEE: "Saudi Arabia looks out for its interests and it is not willing to help Yemenis because Saudis will not get any benefit from such a humanitarian attitude."

"Saudis launched the war in Yemen and they exile Yemenis from Saudi Arabia, forcing them to return their war-torn country,” Sharjabi, 43, added.

Sharjabi believes that after the price increases and the spread of malnutrition around the country, Yemenis should protest everywhere to end the war.

Masani’s sentiments are widely shared across Taiz province. Not everyone, however, believes that protesting is the answer.

Some, such as 28-year-old Taiz resident Walid Abdulqawi, worry that political parties will attempt to exploit the protests for their own goals.

"In 2011, I was one of the first youths who joined the revolution [against longtime leader Ali Abdullah Saleh] in Taiz, and I was willing to lose my life for the sake of freedom, as we were demanding a civil country," Abdulqawi told MEE.

The political parties have not announced their participation in the protests against the Saudi-led coalition, but it seems they have participated indirectly by having their members attend.

Meanwhile, many shops have closed their doors in Taiz city to avoid being stormed by protesters, as happened in the 2011 anti-Saleh protests.

Hisham al-Shadadi, owner of a grocery in Taiz city, closed his shop on Wednesday. "Usually there are some thieves in the protests, and they exploit the protests to storm shops, so I preferred to close the grocery," he said.

The Saudis do have their defenders in the southern city, however.

A pro-government fighter in Taiz, who spoke to MEE on condition of anonymity as he is not authorised to speak to the media, said criticism of the Saudi-led coalition has been too harsh.

"The coalition has made mistakes – in Taiz and across the whole country - but that does not mean they do not do anything," he said. 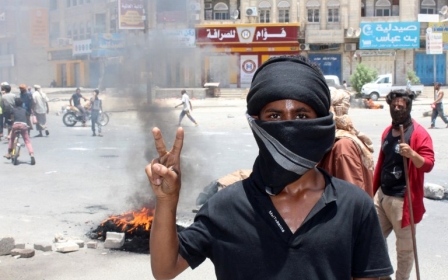 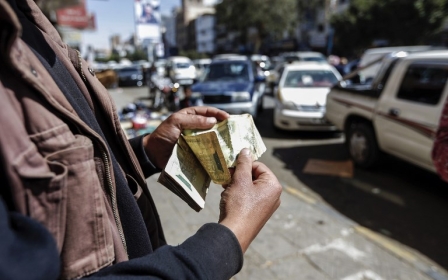