Three years on in Egypt, the fissures of Mohamed Mahmoud remain 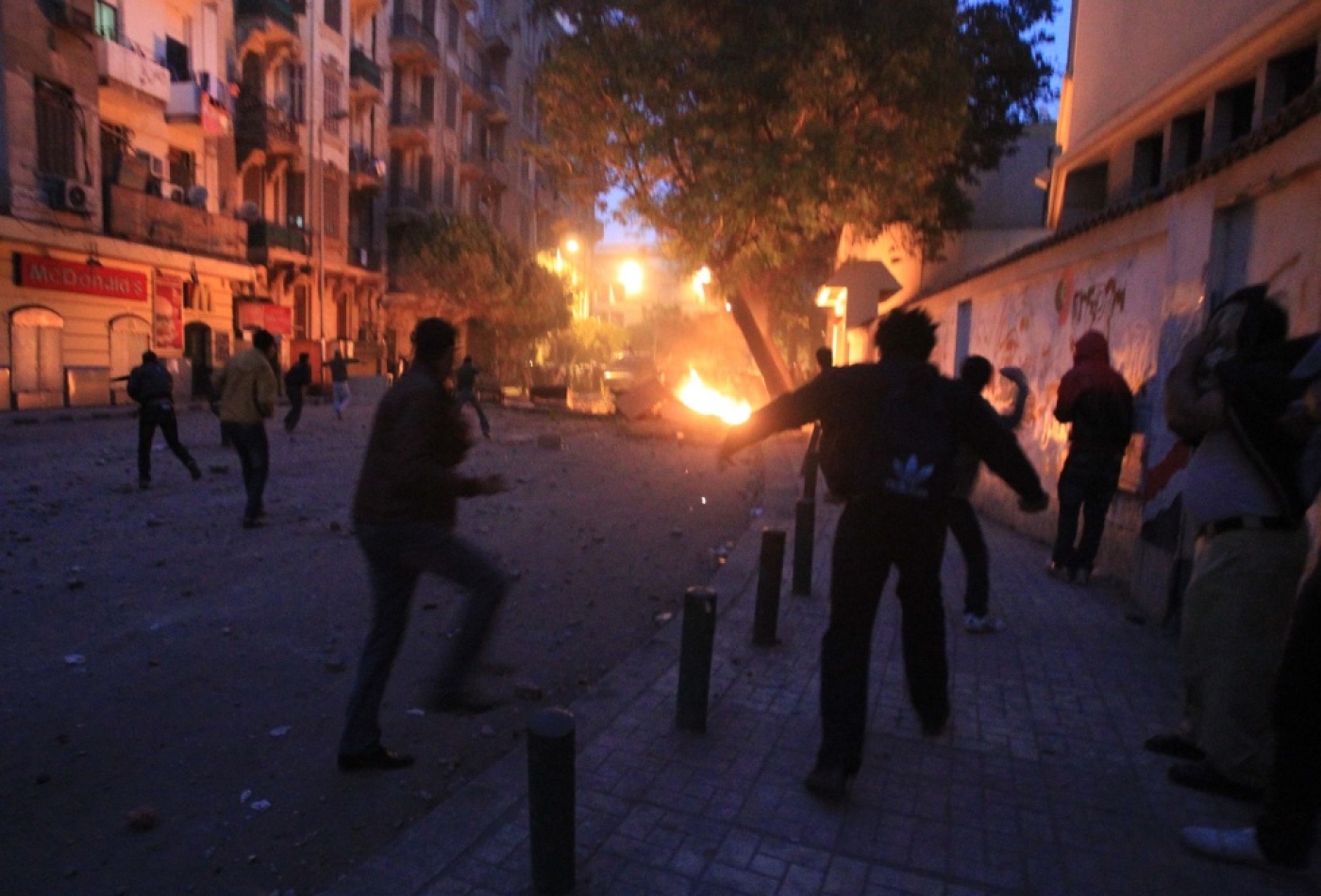 Egyptian protesters clashes with riot police at Cairo's landmark Tahrir Square on November 19, 2011, as Egyptian police fired rubber bullets and tear gas to break up a sit-in among whose organisers were people injured during the Arab Spring (AFP)
By
Nadine Marroushi

Three years ago, Sally Toma joined hundreds of protesters along Mohamed Mahmoud Street in Cairo, just off Tahrir Square, in a six-day battle against Egypt’s security forces that left 51 people dead. This year, however, she will be walking that street alone.

“It’s sad that people who participated in Mohamed Mahmoud, who lived it and have the revolution inside them, can’t go down to this place,” said the 36-year-old female activist, who was in the leadership of the youth coalition that launched the uprising against Egypt’s former president Hosni Mubarak.

“There have been a lot of independent calls to go down to Mohamed Mahmoud to protest, but you never know the intentions of these calls and no one can secure a protest in the current state,” she said. “If people get hurt, who are you going to blame: the security forces, the Protest Law, or the people who call for protest knowing the situation?”

Forty eight people were arrested from Downtown Cairo on Wednesday as a protest march going towards Mohamed Mahmoud street was broken up by police forces, who shot tear gas and fired warning shots to disperse the demonstrators.

Ever since the military-led ouster of Egypt’s former president Mohamed Morsi - a senior Muslim Brotherhood figure - last year, the space for protest and free expression has been severely curtailed. Thousands have been detained, or killed, while a controversial Protest Law has banned all but police-sanctioned demonstrations. A number of human rights groups have shut down in fear of laws that could be used against them.

“It’s very defeating. Mohamed Mahmoud is our only memory of an epic triumph. It was the real revolution, more than 25 January, because you were let down by the Ikhwan [the Muslim Brotherhood], and it was filtered down to those who really believed in the revolution,” Toma said.

The battle began in the early hours of 19 November when Egypt’s security forces violently moved to disperse a sit-in protest in Tahrir Square, epicentre of the 2011 uprising, by families of those injured or killed during the 18 days that led to Mubarak’s ouster. They were calling for justice for their relatives and trials for their killers nine months on.

Armed with batons, Egypt’s riot police came in from the nearby Ministry of Interior headquarters, beating protesters and smashing their tents. As news broke out, hundreds of demonstrators filtered into the square to support the families and fight off a police force, whose repressive tactics in part motivated the mass uprising three years ago.

Videos and pictures that emerged of police officers dragging and piling up dead bodies like rubbish away from the Square only fuelled people’s anger.

On that weekend, a Saturday to be precise, I was sitting just a few streets away in Downtown Cairo listening in on a workshop by the Mosireen collective, a group of non-profit independent filmmakers that were born out of the citizen media that exploded in wake of Mubarak’s fall. They were giving a talk on how to film protests live. Checking Twitter regularly as we did, we immediately heard about the violence that was ensuing. We all rushed to the scene: mobile phones, cameras, and notepads in hand.

I covered the protests for days, along with colleagues at the time at the English language-edition of Egypt’s daily newspaper, Al-Masry Al-Youm. We would stay late into the night witnessing the back-and-forth as protesters tried to edge their way forward along Mohamed Mahmoud Street and push the police forces back into their base. The stench of tear gas filled the air. Often, all you would see were people’s white faces as they ran out of battle lines pouring liquid antacids as an antidote to the eye pain, blindness and suffocation caused by the gas.

Eye patches became infamous too as police officer Mohamed el-Shenawy - also known as the Eye Sniper - shot protesters with pellets in their eyes. Ahmed Harara, a protester who was blinded in one eye on 28 January 2011, which came to be known as Egypt’s Day of Anger, was blinded in the second during Mohamed Mahmoud. The latter were Egypt's deadliest clashes since the January-February uprising.

For many activists and analysts, the battle of Mohamed Mahmoud remains significant for one main reason: it represents the first time that a fissure clearly broke between those committed to continuing with the uprising against the repressive arms of the Egyptian state, including the police, army and judiciary, and those who were ready to make peace with them for their own gains, namely the Muslim Brotherhood.

“It put an end to any attempt at reconciliation between revolutionary forces and the Muslim Brotherhood,” said Ashraf el-Sherif, a lecturer in political science at the American University of Cairo and expert in political Islam.

“The Muslim Brothers wanted to be partners with the military system and the old state in order to reproduce an authoritarian system dominated by them. For revolutionaries, this was a stab in the back,” Sherif added.

During the course of the six days, the Muslim Brotherhood decided to pull its forces out of the Square.

According to Sherif, this was expected from the Brotherhood whose ideology means "they are not revolutionary, and not thinking of establishing a democratic state as the revolutionaries are. That's not their ideological objective."

He defines their long-term goal as creating a Brotherhood-led authoritarian order, which they hoped to do in the short-term by focusing on parliamentary elections. These were scheduled to take place at the end of November, with the Muslim Brotherhood almost certain to win the vote as Egypt’s largest, organised political movement at the time.

Many of the protesters in Tahrir Square had been calling for the cancellation of the elections, which they deemed pointless as long as the Supreme Council of the Armed Forces (Scaf), which had been widely accused of a carrying out a number of repressive practices, were in power and protesters were being killed.

“This was one of the worst and biggest mistakes in [the Muslim Brotherhood's] history, and now we are all paying the price,” said Hamza Sarawy, spokesman for the anti-coup alliance, a grouping of Morsi sympathisers, who worked in the former president’s office during his one-year rule.

“If we are archiving the revolution, that decision marks the beginning of polarisation in Egypt, between Islamists and non-Islamists,” said Sarawy, who continued to protest in the Square despite the Brotherhood’s call, as many other Brotherhood members and sympathisers did individually.

The clashes forced the Scaf to set a formal timetable for handing over power, which they did following a May - June 2012 election that eventually brought Morsi, the country’s first democratically elected president, to power.

The Muslim Brotherhood's decision to go ahead with elections, however, would soon stab them in the back too. A year after Morsi was elected, the general he appointed to head the armed forces, Abdel Fattah al-Sisi, led Morsi’s ouster, put him in jail, and imprisoned scores of Muslim Brotherhood leaders and supporters. Sisi now leads Egypt as its president, following a controversial May 2014 vote that his critics said was far from free and far.

While he was still a field marshal, he oversaw the biggest massacre in Egypt's recent history, during which at least 817 Morsi supporters were killed on 14 August last year as Egypt’s police force, backed by the army, moved to clear their sit-in calling for Morsi's re-instatement. The government has since launched a heavy crackdown against a range of opposition groups.

‘Nothing left to lose’

The turnout for protests on this year’s anniversary is expected to be small and sporadic. The army guards entrances into Tahrir Square and there are army tanks that face Mohamed Mahmoud street.

Last year, the government erected a plaque in the Square to commemorate the fallen of Mohamed Mahmoud, which some saw as an ironic memorial to its own massacres. It has since been destroyed by offended protesters and only its crumbling remains are visible.

Morsi supporters have called for formal protests on 28 November, the anniversary of the first day of parliamentary elections three years ago, and some expect that there may be rehearsals for these protests over the next week.

For Sally Toma, however, today has been about remembering all those who sacrificed their lives - including on previous anniversaries of Mohamed Mahmoud - and its them she recalled as she walked past the street’s murals of the dead.

“It’s an open museum, a place of our memories, and to keep that alive we need to keep visiting it,” she said. “I will be thinking about what they died for and how we should continue fighting for it. But, also, about how to balance my life and survive. Right now, we’re in the survival stage.”

Many demonstrators, particularly women, have also been raped and sexually violated by plain-clothed officers, and unknown men, in what activists say is an attempt to silence them both in public and in prison.

For one particular family of activists, Mohamed Mahmoud this year is a reminder of how things have gone “from bad to worse”, as Sherif described it.

Alaa Abdel Fattah, a blogger and protester who has been targeted under Mubarak, Scaf, Morsi and the current regime, was in jail on his birthday three years ago, and remains in jail today, while the military is still in power.

He was detained this year for protesting the Protest Law, and is now on a hunger strike. His mother was on a hunger strike in 2011 demanding a civil trial for her son, who was facing a military one. This year, his mother Laila Soueif and sister Mona Seif, both prominent activists, were on hunger strike for over 75 days to support Alaa. They ended it today.

Alaa's other sister, Sanaa, and fellow protesters are all serving three years in jail, also for protesting the Protest Law.

Alaa’s wife gave birth to their first child in 2011, while he was in prison. This year, him and his sister Sanaa lost their father, Ahmed Seif, a prominent human rights lawyer, who died while they were both in jail.

“But, to all this there will come an end and the future is yours. Happy Birthday ya Alaa,” wrote Ahdaf Soueif, a Booker-prize finalist, and aunt to Alaa and Sanaa, on her Facebook page.

Others aren’t as optimistic.

Twenty-four year-old Sarawy told Middle East Eye that he would protest, regardless of the risk. “We have nothing left to loose. We have lost our country, our friends, and I personally have lost my brother,” he said.

Sarawy’s brother, Ahmed, a university professor was detained from his home in September last year on charges of forming a gang to rob luxury homes and terrorising his neighbours, allegations which Hamza described as “funnily absurd”.

Sherif, too, said he saw nothing to be hopeful about, explaining that this year he will not be commemorating the Mohamed Mahmoud anniversary.

“Maybe in the long-run the balance of power will change, but in the short-term it’s extremely pessimistic,” he said. “I won’t be commemorating. It’s meaningless right now.” 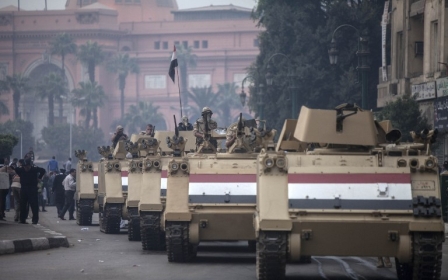 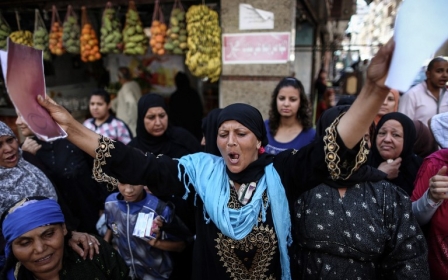 Egypt Turmoil
In Egypt, where café chatter can get you arrested 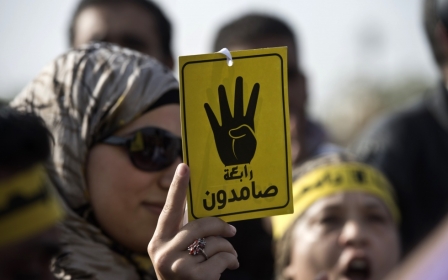