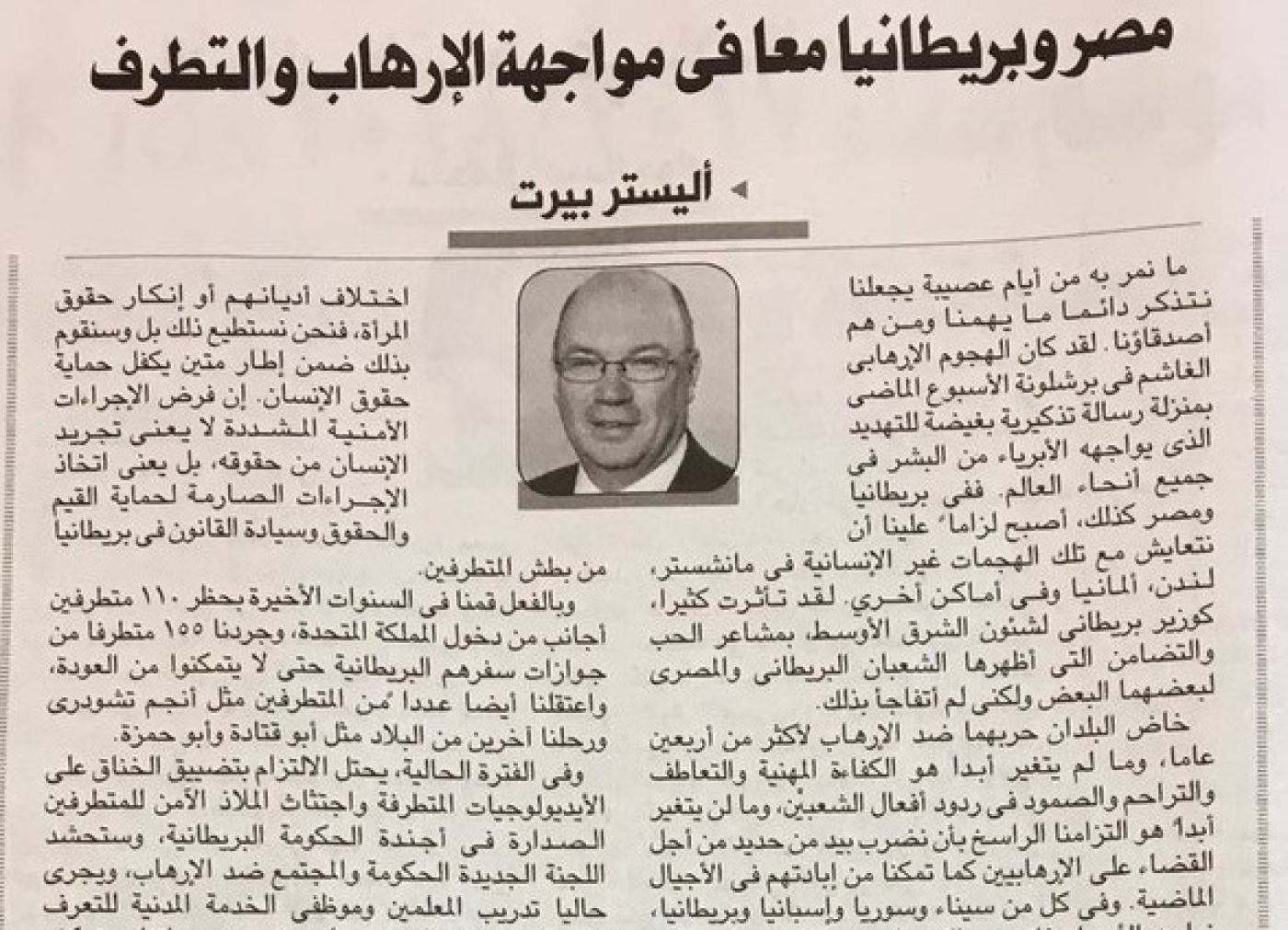 The difficult days that we pass through always make us remember who matters to us and who our friends are. The brutal terrorist attack in Barcelona last week was a reminder of the threat that innocent humans face in all parts of the world. And in Britain, and in Egypt, it has become necessary for us to coexist alongside these inhumane attacks in Manchester, London, Germany and in other places. I have been touched deeply, as the British Minister for Middle Eastern affairs, by the feelings of love and sympathy expressed by the British and Egyptian nations to each other. However, I am not surprised by this.

The two countries have fought their wars against terror for over 40 years, and what has never changed throughout this time is the professionalism, the sympathy, the compassion and solidarity in the reaction of the two nations, and what has never changed is our unwavering commitment to strike with a fist of iron in order to destroy the terrorists in the same way that we managed to wipe them out in previous generations. And in all of Sinai and Syria and Spain and Britain, we confront the enemies themselves. But I know the people of Britain, and I also know the people of Egypt: we will never surrender.

However, the terrorist threat is evolving, and this is what invites us to change our response, and whilst we have managed to expel ‘Daesh’ from Syria and Iraq, we are now seeing fruitless and desperate attempts to channel terrorist attacks elsewhere in the world, and thus, Britain now seeks to strengthen its security apparatus more than any time in history, and has managed to thwart 18 ‘terrorist’ attacks in the last four years, owing to the fact that we have managed to detain 1,500 individuals for charges relating to terrorism since 2010. But it falls on us to do better than this, so our security services have appointed 1,900 experts in the field of combatting terrorism, in addition to introducing over 1,000 armed police officers, as well as working to ensure that our police force and the judiciary to guarantee that our laws grant us the tools that we need. In addition to this, we seek to make airport security procedures more stringent and tougher than ever before.

These efforts are not just to secure Britain alone, as we will not leave Egypt and surrounding countries alone in combatting terrorism. The British armed forces have sent hundreds of personnel to free Iraq and Syria from the clutches of ‘Daesh’, and as soon as the terrorists’ networks crumble, we will lead all international efforts to track them and drain their sources of funding. With the involvement of Egyptian police force and army, British security forces are working on offering their expertise in repelling roadside bombs and protecting civilians, as well as making sure that vital equipment arrives, such as sending spare parts for helicopters in Sinai.

Despite this, the rigorous security procedures are not enough to combat this phenomenon. We must destroy the artery that feeds terrorism, and this can be manifested by calling for the British Prime Minister Theresa May and the Egyptian President Abdel Fattah al-Sisi to put together a full strategy to remove the roots of terrorism that is considered to be one of the biggest challenges of our time.

We cannot tolerate extremism more than this, taking into account that we fully respect the fact that communities with different views, beliefs and cultures can live peacefully side by side. We will confront anyone that claims that Islam is not compatible with peaceful life in British society. We will confront anyone who tries to spread hatred and deny people’s rights as a result of their different religions or anyone who denies women’s rights. We can do this - and we will do this - within a framework that will protect human rights. Imposing tough security procedures doesn’t mean that we will take away people’s rights, but it means that we will use strict procedures to protect values, rights and the law in the UK from extremist activities.

And indeed, in the last few years, we banned 110 foreign extremists from entering the UK and we revoked British passports from 155 extremists to prevent them from returning, and we arrested a number of extremists like Anjem Choudary and we deported others from the country like Abu Qatada and Abu Hamza.

In the current period, the commitment to crack down on extremist ideologies and the sheltering of radical extremists is at the forefront of the British government's agenda. The new committee will gather the government and the people against terrorism. Currently, there is training for civil service employees on extremism and how to counter it in our institutions. The government is working now on an independent report to investigate the misuse of teaching Shariah to undermine the law. The Charity Committee is working on preventing the collection of donations for illegal activities. Directions have also been issued to media organisations to stop airing speeches of extremists who are inciting hatred.

And now in Britain, anyone, in any organisation, that incites hate or tolerates or supports or justifies any terrorism, is against the law will be prosecuted and punished. And this message is also directed to the Muslim Brotherhood.

The British government's position, as a permanent member of the UN Security Council, after the report on the Muslim Brotherhood in 2015 has the most powerful official statements about this organisation that is authentic. The UK was one of the countries that didn’t ban the Muslim Brotherhood as an international organisation, but this report for the first time challenged the Brotherhood claims that they have no relation with violent activities, it warns that membership of the group is a possible indication of extremism. And it is clearly evident that there is a contradiction between the beliefs and activities of the Brotherhood and that of Britain's values and interests.

The UK is working during this period to implement the procedures that belong to the content of the report (from 2015) and despite the fact that there isn’t enough proof to allow us to ban the organisation, we will impose tight surveillance on the Brotherhood's behaviour and their activities including, visa requests, their source of funding for charity organisations and their relationships with international organisations. Britain is now one of the few countries around the world that banned, on all levels, any communication with the Brotherhood since 2013.

Throughout our observation of the Brotherhood's activities around the world, it became completely clear that this movement uses ambiguity to hide their extremist agenda in Egypt. These evasive tactics, used by the organisation (MB) and that which was observed by those who prepared the 2015 report, still continue to be used in 2017. Now is the time for everyone who defends the Brotherhood in London or in Cairo to put an end to this confusion and ambiguity.

All of this leads to a question for those who support the Brotherhood: Will you ignore the fact that the Muslim Brotherhood has failed in one of today's biggest challenges? Or would you prefer to join Britain and Egypt in condemning this poisonous extremist ideology, where ever it may exist?