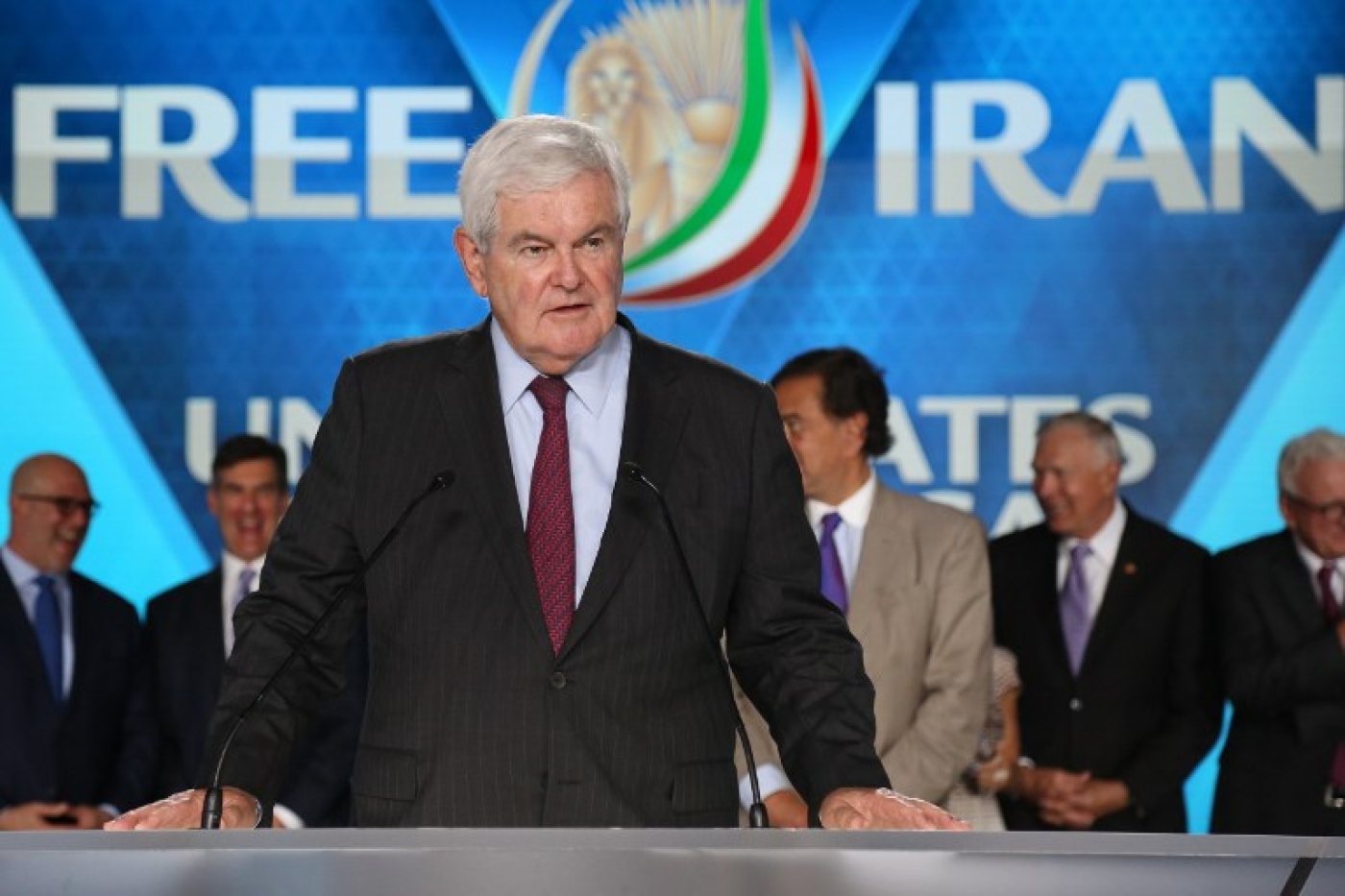 Newt Gingrich, former US Speaker of House, speaks at rally near Paris on Saturday (AFP)
By
MEE and agencies

US President Donald Trump allies Rudy Giuliani and Newt Gingrich on Saturday urged "regime change" in Iran, saying the prospect was closer than ever after the Islamic Republic was hit by a new wave of strikes and protests.

Former House speaker Gingrich and ex-New York mayor Giuliani told the Paris-based National Council of Resistance of Iran (NCRI), an umbrella bloc of groups of exiled Iranians opposed to the Islamic Republic, that Trump needed to turn up the heat on European countries still seeking to do business with Tehran in spite of renewed US sanctions.

"The only way to safety in the region is to replace the dictatorship with a democracy, and that has to be our goal," Gingrich told the Free Iran rally, organised by exiled opponents including the former rebel group the People's Mujahideen, which is banned in Iran.

Maryam Rajavi, who heads the group, told reporters: "Regime change in Iran is within reach as never before ... The wheels of change have started turning."

Speech by Newt Gingrich @newtgingrich at Free Iran: The Alternative Gathering 2018, Paris:
I look forward to the day that this meeting could be in Tehran in a free country#FreeIran2018 #IranRegimeChange pic.twitter.com/EvTROqAZjZ

Gingrich stressed that he did not speak for the Trump administration, but added: "It seems to me there would be a rather happy celebration should regime change occur."

In Tehran, Supreme Leader Ayatollah Ali Khamenei said Trump would fail in any attempt to turn the Iranian people against the ruling system.

"They bring to bear economic pressure to separate the nation from the system ... but six US presidents before him tried this and had to give up," Khamenei said on his website.

Gingrich said he did not support arming the Iranian opposition, saying Trump should instead heap on more sanctions after pulling out of the 2015 nuclear deal between Tehran and world powers.

European countries that signed the 2015 Iran deal along with the United States, Russia and China, are sticking with it, saying the agreement prevents Iran from developing weapons-grade nuclear fuel. But Giuliani said Europe should be "ashamed" of itself.

Gingrich blasted countries attempting to find ways to allow their companies to keep operating in Iran under the threat of penalties for US sanctions-busting.

"We need to have a campaign to shame the European governments who are unwilling to support freedom and democracy," Gingrich said. "We need to insist that they join the sanctions once again."

Giuliani called for a boycott of companies "that continually do business with this regime".

"Freedom is right around the corner," he added of the recent protests in Iran.

Gingrich, Giuliani and other US politicians have been paid handsomely to speak at the annual Paris rally in recent years.

At the same conference last year, John Bolton, who was appointed Trump's national security adviser this April, told NCRI members they would be ruling Iran before 2019.

Bolton, who at the time was with the American Enterprise Institute think-tank, told Fox News in January: "Our goal should be regime change in Iran."

The Gingrich and Giuliani comments came after US Secretary of State Mike Pompeo earlier this week gave his backing to the strikes and protests over Iran’s economic woes, not least the collapse of the currency following the US withdrawal from the nuclear deal.

Iranians have been hit by rising prices and record levels of unemployment have left a third of those under 30 out of work.

The latest protests follow dozens over the new year that left at least 25 people dead.

The People's Mujahideen was founded in the 1960s against Iran's royalist government and went on to fight the Islamic regime after the 1979 revolution.

In 2009, the European Union struck the Mujahideen from its list of terrorist organisations, where it had been since 2002. The United States did the same in 2012. Inside Iran
ANALYSIS: After US rebuff, Iran forced to hedge bets in the East