US President Donald Trump has lashed out at OPEC, the 15-nation oil cartel, with a warning to stop manipulating oil markets.

In an interview on Sunday with Maria Bartiromo on Fox News's Sunday Morning Futures, the American president also piled pressure on close US allies with a threat to sanction European companies that do business with Iran. Tehran, however, vowed on Sunday to foil any US bid to block its oil exports.

Trump, who spent the weekend at his private golf club in Bedminster, New Jersey, said in a tweet on Saturday that Saudi Arabia's King Salman bin Abdulaziz al-Saud had agreed to produce more oil.

The White House later walked back the president's comments, reporting that the king said his country can raise oil production if needed.

Oil prices had risen on Friday, with worries that US sanctions against Iran would take away significant volumes of crude from world markets while oil demand worldwide increases.

Rising gasoline prices could create a political headache for Trump ahead of the November midterm elections by offsetting Republican claims that his tax cuts and rollbacks of federal regulations have helped boost the economy.

On Fox, Trump directed blame at OPEC, of which Saudi Arabia is a member. Asked if someone was manipulating oil markets, Trump said: "OPEC is and they better stop it because we're protecting those countries, many of those countries."

The president also had tough words for other US allies. Earlier this year, to the chagrin of European partners, Trump said he would pull the United States out of the Iran nuclear agreement secured by world powers. He recently said that the European Union was "set up to take advantage of the United States".

Iran vows to defeat US efforts

He said in the Fox interview that European companies would face sanctions if they traded with Iran now. "Of course. That's what we're doing, absolutely," he said.

Still, Iran vowed to defeat US efforts to block its oil exports and warned rival producer Saudi Arabia it would never take Tehran's "place" on the international oil market.

"We will surely do something to thwart the US rallying cry that Iranian oil must be stemmed," First Vice President Eshagh Jahangiri said in statements broadcast on state television.

"The Iranian government has a plan... and God willing we are certain that we will be able to sell as much oil as we want," he said.

The US exited from the nuclear deal between Iran and world powers in May and said it would reimpose economic sanctions on the Islamic republic and its business partners by 4 November.

Last week, a senior US State Department official described tightening the noose on Tehran as "one of our top national security priorities".

Jahangiri said: "They're begging the Saudis to raise their output so that if Iran's quota decreases nothing will happen to the markets."

"In this battle,” he said, “any country that tries to take Iran's place on the oil market will be guilty of treason against Iran... and surely one day it will pay the price of this treason.”

Iran and Saudi Arabia broke off diplomatic relations in 2016 and are locked in several proxy wars in the Middle East, including in Yemen.

Iran possesses the second-largest gas reserves on the planet after Russia and the fourth-largest oil supply, while Saudi Arabia is the world's biggest oil exporter. 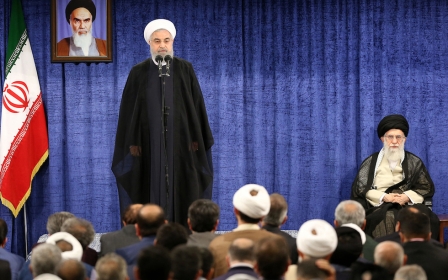