'We are all Sofiene, we are all Nadhir,' read placards held by the demonstrators supporting the missing journalists (AA)
By
MEE and agencies

Around 300 people have rallied in central Tunis in solidarity with two journalists the Libyan branch of the Islamic State (IS) group claims it has executed.

"We are all Sofiene, we are all Nadhir," read placards held by the demonstrators on Friday, many of them young journalists, in reference to Sofiene Chourabi and Nadhir Ktari.

On Thursday, the IS branch in Libya issued a statement saying the pair, who went missing there in early September, had been executed because they had "sowed corruption in the land".

"[The rally] is a clear response to terrorist organisations that they won't deter us and that we will never give up defending freedom of speech and expression," Naji Baghouri, head of Tunisia's journalists' syndicate, told Anadolu news agency.

"We support Sefian and Nazir and demand that the truth be revealed regarding their fate and that they be returned safely to Tunisia," he added.

Sami al-Qatari, the father of one of the missing journalists, told Anadolu that he had appealed to the government to get answers. "It is a life-and-death situation," he said. "We're in a race against the clock."

Newly-elected Tunisian President Beji Caid Essebsi met the families of the two men on Friday, but has not made any public statement about the case.

Chourabi, an investigative journalist and blogger who was active during Tunisia's 2011 revolution, and Ktari, a photographer, went missing in the Ajdabiya district of eastern Libya on 8 September.

Libya has been engulfed by chaos since the 2011 NATO-backed uprising that toppled and killed dictator Muammar Ghaddafi. Two rival governments and a host of militia groups are now vying for control of the country. 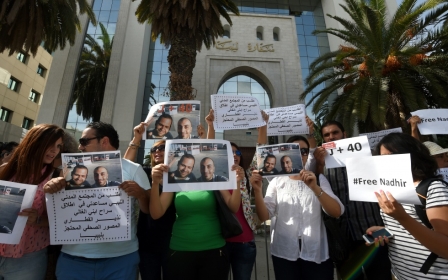 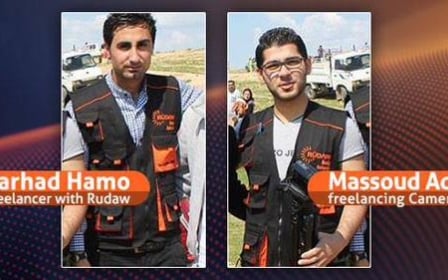