A Turkish court on Monday sentenced a co-mayor of a major city in the Kurdish-majority southeast to 15 years in jail on charges of membership of the outlawed Kurdistan Workers' Party (PKK).

Bekir Kaya had served as co-mayor of the city of Van - which has a population of around half a million – until he was convicted by a local court of being a member of the PKK and its urban wing, the Group of Communities in Kurdistan (KCK), the state-aligned Anadolu news agency said.

One of Kaya’s colleagues contacted by AFP confirmed the verdict, but asked not to be named.

Twelve other defendants in the trial were also given prison sentences of between 7.5 years and 15 years, the agency said.

A supporter of the country's main pro-Kurdish party the Peoples' Democratic Party (HDP), Kaya, 38, had already served time in jail from 2012-13 over the PKK's role in Van.

"Bekir Kaya is the will of the people. We will not give up," the municipality wrote in a message on its Facebook page.

The verdict comes amid a major spike in fighting between Kurdish rebels and the security forces in southeast Turkey as the military presses a major offensive backed by curfews.

The authorities say they are seeking to flush out PKK militants from urban centres - but HDP activists accuse the military of using wildly excessive force that has left dozens of civilians dead. Several members of the security forces have also been killed.

The authorities are also stepping up a legal crackdown against top figures in the HDP, which the government accuses of being a political front for the PKK.

Prosecutors last week opened a criminal investigation against the co-leaders of the HDP, Selahattin Demirtas and Figen Yuksekdag, over comments supporting autonomy for the southeast.

President Recep Tayyip Erdogan on Saturday backed the probe, saying the pair should "pay the price" and be stripped of their immunity.

Despite a call for the party's leaders to be prosecuted for supporting the autonomy of Kurdish areas, the HDP said on Monday that it would go ahead with a planned conference to discuss the topic.

According to pro-Kurdish media, 36 mayors in the southeast are currently being prosecuted, with half of them in custody, mostly on charges of backing autonomy.

The PKK launched a formal insurgency against the Turkish state in 1984, initially fighting for Kurdish independence although now more for greater autonomy and rights for the country's largest ethnic minority.

The conflict, which has left tens of thousands dead, looked like it could be nearing a resolution until an uneasy truce was shattered in July. 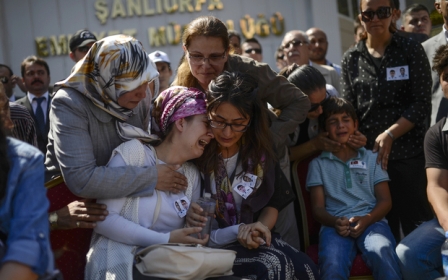