Turkey's main opposition leader on Tuesday accused President Recep Tayyip Erdogan of influencing the judiciary, speaking on the trail of his unprecedented protest march in defiance of the Turkish leader.

Kilicdaroglu's trek to Istanbul from Ankara is expected to take almost a month and represents by far his biggest challenge to Erdogan since he took over the CHP in 2010.

Every week the party leaders address their lawmakers in parliament in Ankara, but on Tuesday, Kilicdaroglu spoke to hundreds in the town of Camlidere, on the outskirts of the capital.

He challenged Erdogan to resign if it were proven that the government influenced the judiciary.

"If I prove you and your government gave instructions to the courts, will you resign from your role as an honest and honourable person?" he said.

"I give my word as well. I will leave politics if I do not prove [these claims]. Because I am an honest and honourable person."

Erdogan fired back at the CHP leader, who has become the president's most notable political opponent since the jailing last year of Selahattin Demirtas of the pro-Kurdish Peoples' Democratic Party (HDP).

Kilicdaroglu is "a lying machine, everyone knows that in this country," Erdogan said in an Ankara speech. "He now needs to back up his allegations. Go ahead and prove it."

In his speech, Kilicdaroglu said he was "walking for everyone who seeks justice" and then rallied the crowd, vowing: "We are a party that will defend democracy until the end."

The opposition accuses Erdogan of drifting towards authoritarianism, especially since last year's failed coup which was followed by a wide scale crackdown and a referendum in April in which voters narrowly approved expanding the president's powers.

Kilicdaroglu has claimed that Erdogan is the "July 20 coup plotter," referring to the date when the president declared a state of emergency.

About 50,000 people have been arrested and another 100,000 have lost their jobs in the biggest purge in modern Turkey's history under the emergency.

The 68-year-old CHP leader has made the word "justice" the slogan of his march, with both the sign he holds while walking and the white hat he wears emblazoned with the word.

At the weekend, Erdogan appeared to warn Kilicdaroglu he could face legal troubles over the march, and on Monday he told the CHP leader he "must respect the judiciary's decisions".

But Kilicdaroglu, who has already walked 100km, hit back at the remarks.

"They say, 'why do you seek justice walking?' Why would we walk if there is justice? We would live in peace." 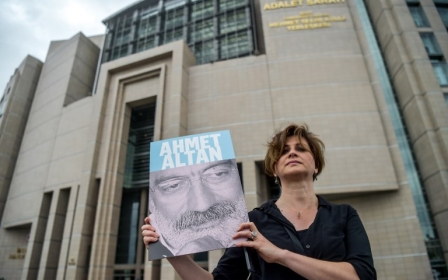