Turkey on Tuesday began moving tanks and other heavy-duty hardware from central Anatolian cities to the Iraqi border, a move seen potentially as preparation for an incursion into Mosul to prevent what it sees as possible sectarian cleansing.

Reports and images from local media showed tanks, armoured personnel carriers and bulldozers being transported out of Ankara, Cankiri and Aksaray and believed to be headed for the border town of Silopi.

Turkish Defence Minister Fikri Isik issued a short statement after the deployment began, saying: "Turkey should be prepared for all eventualities."

"This action is to prepare in the face of all these developments. Turkey has to be prepared beforehand for all eventualities and this is part of those preparations," he added.

Turkish officials have responded harshly to Iraqi and US warnings that it should not become militarily involved in Iraq without the approval of the central government in Baghdad.

The Turkish president, Recep Tayyip Erdogan, has been adamant that one of Turkey’s red lines is the participation of Iraq’s Shia militias in the military operation underway to take back the Iraqi city of Mosul from the Islamic State (IS) group.

He has also used recent speeches to assert Turkey’s historical claim to Mosul.

The move appears to be a response to reports which indicate that Shia militia-dominated Popular Mobilisation Units (PMUs) are increasingly involved in the advance on Mosul and are also moving on the town of Tal Afar.

Ankara and Baghdad have been at odds over the presence of a Turkish military outpost in Bashiqa near Mosul. Turkish authorities insisted that they would maintain their military presence in Iraq in spite of Baghdad referring to it as an occupation and calling for them to leave.

Erdogan has voiced concern over potential sectarian violence if the PMUs enter the majority Sunni-populated city of Mosul.

Turkey has pushed for a more active role in the Mosul offensive since it started, but its participation has been rebuffed. Even Ankara’s allies the US and the Kurdish Regional Government in northern Iraq have not responded to Turkish pressure, saying it should defer to the Baghdad government, which decides on the participants and their roles in the offensive.

Despite being rebuffed, Turkey has said it will not hesitate to take unilateral action if the Sunnis in Mosul are faced with a threat.

Reports have also been coming in that the PMUs have been making advances towards Mosul.

Iran, a strong ally of the Baghdad government, has also offered to "fairly" mediate between Ankara and Baghdad, according to reports in local media.

The images of these deployments emerged as Turkish Prime Minister Binali Yildirim arrived for an unscheduled meeting with Erdogan at the presidential palace in Ankara.

Earlier on Tuesday, Turkey’s chief of military staff, Hulusi Akar, flew to Moscow to meet his Russian counterpart to discuss military cooperation between the two countries and discuss regional events.

Erdogan has stated in recent days that Turkey will adopt a pre-emptive defence doctrine and conduct cross-border strikes against groups it considers as terrorists and posing a threat to its security.

The ongoing military operation called Euphrates Shield, which Turkey launched on 24 August in northern Syria, is also believed to be part of this new pre-emptive doctrine.

The Turkish manoeuvres come as Iraqi forces continued to advance within the city of Mosul.

Soldiers from Iraq's elite Counter Terrorism Service (CTS) entered the state television station in Mosul on Tuesday, the first capture of an important building in the IS-held city since the start of the offensive about two weeks ago, the force commander, Lieutenant-General Talib Shaghati, said.

"This is a good sign for the people of Mosul because the battle to liberate Mosul has effectively begun," Shaghati said.

Iraqi troops, security forces, PMUs and Kurdish Peshmerga have been advancing on several fronts towards Mosul, backed by US-led troops and air forces. Special forces units sweeping in from the east have made the fastest progress.

"We are currently fighting battles on the eastern outskirts of Mosul," CTS Lieutenant-General Abdul Wahab al-Saidi said. "The pressure is on all sides of the city to facilitate entry to the city centre."

He said CTS forces had cleared IS militants from most of the eastern district of Kokjali, close to al-Quds, on Tuesday, "so now we are inside the district of Mosul". 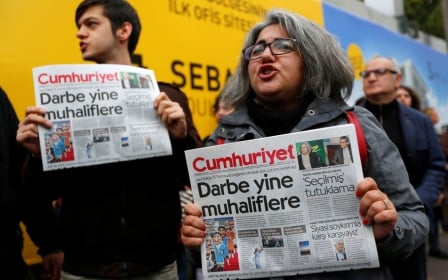