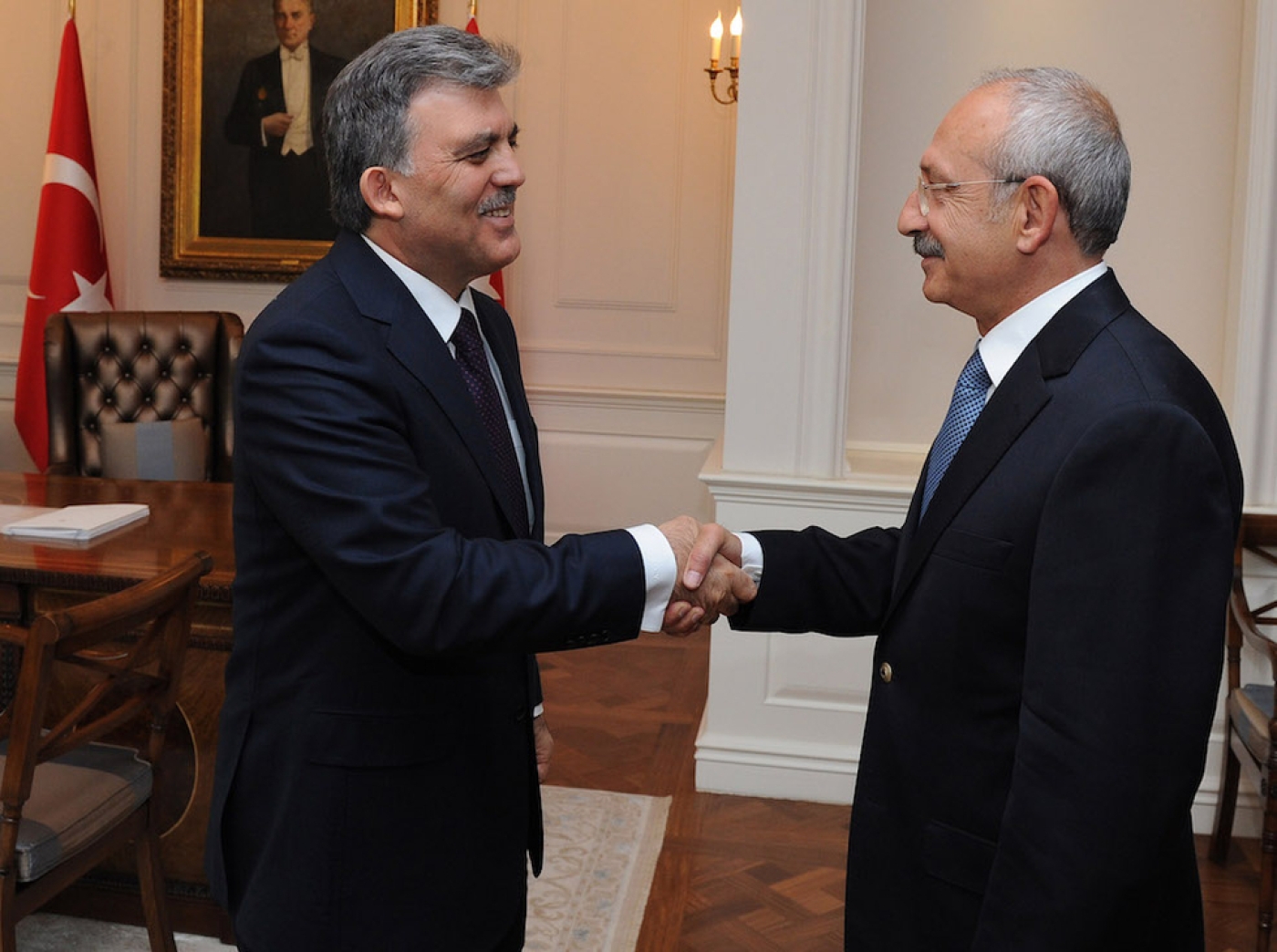 Turkey's opposition CHP party has quashed rumours it will nominate Abdullah Gul as its presidential candidate after condemnation from supporters and MPs, with one high-profile member branding him "an accomplice and brother" of the incumbent Recep Tayyip Erdogan.

The most recent rumours began to swirl over Gul, a co-founder of Erdogan's ruling AKP party and a former president, soon after Erdogan earlier this month called snap elections in June to usher in a new and powerful executive presidency.

But the suggestion drew strong criticism from many CHP supporters and MPs, while analysts said the secularist CHP was walking into a trap set either by itself or others who wanted to ruin its recent attempts to rebuild confidence.

Erdogan's accomplice and brother... could not, should not, be our choice to get rid of Erdogan

The CHP, or Republican People's Party, was the historical power in modern Turkey, but has in recent decades lost out to the Islamist-leaning AKP, or Justice and Development Party, and struggled to contain internal divisions.

Muharram Ince, a CHP MP for city of Yalova, who himself has been tipped as a potential presidential candidate, said such a nomination would ignore Gul's history as an ally of Erdogan.

"We want to get rid of Tayyip Erdogan for the future of Turkey's peace, security, our nation and our children," Ince said this week on Twitter.

"Erdogan's accomplice and brother... could not, should not, be our choice to get rid of Erdogan."

The CHP's leader, Kemal Kilicdaroglu, has denied holding talks with Gul, but has repeatedly held discussions over a possible alliance with the Islamist "Felicity Party", who have themselves been openly pushing for Gul to run.

Ozgur Ozel, the CHP's parliamentary group chair, played down the suggestion that Gul had ever been in the running.

“Enough. We are fed up with all the speculations,” Ozel tweeted.

“The only objective here is to create debates and lower morale in the CHP. The CHP has never had Abdullah Gul's name on the table. It doesn't have it now and it won't have it in the future."

Since leaving the presidency, Gul has been a mild critic of Erdogan's policies, and is thought to be deeply concerned about the current government's direction of travel.

However, CHP supporters say his time as prime minister and president after the turn of the millennium coincided with the first major political breaks from Turkey's secular and republican values.

Gul's run for the presidency in 2007 was met by some of the country's largest ever protests, many led by the CHP, who feared that the election of a president with an Islamist background would threaten the republic.

Slogans from the protests included "the roads to Cankaya (parliament) are closed to sharia!" and "we don't want an imam in Cankaya!"

However, the CHP has in the past been willing to back candidates with similar backgrounds to Gul in a bid to challenge Erdogan: the party in 2014 allied with the far-right MHP to support fomer Organisation of Islamic Cooperation chief, Ekmeleddin Ihsanoglu, as a presidential candidate, winning 38 percent of the vote.

Nevertheless, CHP members and supporters used social media to attack the possibility of Gul as a candidate.

"Thanks for the sensitivity and reactions you have shown... as we have mentioned for months, Gul cannot be our candidate," said Ali Seker, an Istanbul MP.

Ali Tirali, a co-founder of the critical 20 April platform within the party, questioned whether the CHP had learned anything from the "Ekmeleddin disaster", while another supporter said the CHP would have "lost me forever" if they put Gul forward.

"Gul is still a member of AKP and we do not remember any critique of recent policies of his party by him," Tirali told Middle East Eye.

"How could someone who had not shown any disapproval of the government's policies be the candidate of the main opposition party?"

Stirring up a hornets' nest

Aykan Erdemir, a former CHP MP and senior fellow at the Foundation for Defense of Democracies, said that he did not see any possibility of Gul becoming the CHP's candidate and said the suggestion had primarily been stirred up by "journalists and intellectuals".

"At this point, pro-government pundits seem to be fuelling this debate," he told Middle East Eye.

"They have accurately identified the controversy over Gul's candidacy as an opportunity to slow down the momentum the opposition parties have built through their recent alliance efforts."

However, Selim Sazak, a Washington-based analyst studying Turkish politics at Brown University, said that the CHP leadership was attempting to backtrack after the stronger than expected backlash against Gul.

"The CHP leadership is is not telling the complete story. They did consider Gul," he told MEE.

"They considered many names because the CHP leader doesn't know from the get-go who would be the acceptable candidate for, first and foremost their own very fractious party.

"You had to find someone both the progressives and the conservatives could agree on.”

Sazak said that party insiders told him "most of it was not reflective of actual negotiations" within the party but different factions "trying to test the waters".

“There was a much more intense than expected backlash," he said.

"People did not want a repeat of the last presidential elections where the CHP nominated this obscure guy because the MHP said that would be a good candidate.”

Felicity Party leader Temel Karamollaoglu met with Gul on Wednesday evening, reportedly with the intention of sounding out his interest in being a presidential candidate.

So far, there have been no public announcements by Gul on whether he will stand as a candidate with any party's backing - but some observers still believe that he could be the figure who could best straddle the divides between liberal, conservative, religious and nationalist voters and challenge Erdogan's apparently unassailable position.

Tirali conceded that if Gul were to return to politics "using his own means", he could gain support.

However, he emphasised that Turkey needed to focus on building "a new social pact, a new constitution, free press and a pluralist political system".

"I believe that Mr Gul could not be the leader of this critical period of restoration of democracy and secularism," he said.

Despite the discussions with the Felicity Party and the newly formed centre-right Iyi Party, Erdemir said he expected the CHP to field a candidate from its own ranks.

"I think shortly we will see a return from debating Gul to discussing key issues such as restoring the parliamentary system and strengthening the broad alliance against the authoritarian regime."